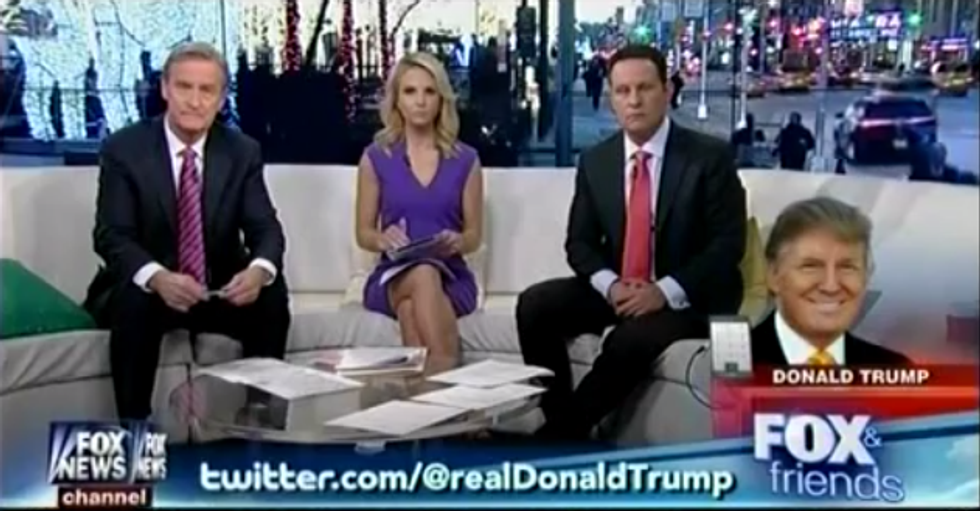 You may be aware of a hostage situation in a Lindt chocolate shop in Sydney, Australia. Because it appears to be politically motivated, and the gunmen have reportedly displayed an ISIS (or Muslim or Those People, who knows!) flag in the window, it is therefore the perfect opportunity for the idiots at Fox & Friends to invite Expert On All Things Donald Trump to explain this situation, and of course how it is further evidence that America now sucks, thanks a lot, Obama! Trump is an expert on Those People, and as the Fox hosts point out, he also lives near a Lindt chocolate shop. So he's got that added personal insight.

Donald, please explain how this hostage situation half way around the globe is actually an attack on America.

The fact is, they no longer respect this part of the world, our world, they no longer respect it. And they see what’s happened, they see what they get away with, and they just don’t have respect, and it will happen in this country, and it’ll happen more and more, and throughout the world. But a lot of it is a lack of respect, and they certainly don’t have it.

We checked a globe, and we're not sure how Australia is "our world," unless we also colonized it overnight and stuck an American flag in the middle of it, which wouldn't surprise us, actually. Or maybe it's just that there are white people there, and they speak American, even if they do it with distinctly un-American accents, and also they have chocolate shops, so they're basically Just Like Us.

It seems as though to contrast, we’re here, now handcuffing and really creating enemies out of those here that want to keep us safe, in law enforcement, in the CIA. What we’ve been going through lately. Describe your take on that contrast.

No, we have no idea what the hell she’s talking about. Something something, if only Australia didn’t have to contend with a handcuffed CIA, something? But Trump totally gets where she’s going with this.

Well, I said it in a few words. We go for sleep deprivation, and they go for chopping off people’s heads, and then we’re horrible people because sleep deprivation is a horrible form of torture. And waterboarding and all. And nobody can tell me we don’t get information from things such as that.

Well, actually, Mr. Trump, plenty of people could tell you that torture is not an effective way to get information. People who actually know what they’re talking about. But that’s no reason for you to listen to them when you are quite sure they’re YOOGE idiots anyway.

And then we pay people $80 million to come up with certain ideas, and then we pay them $40 million to do that horrible report, and now I understand they’re going to be releasing pictures. I know the president, or lots of people in the administration, want to release actually pictures of what took place during the tortures. That’s going to make us look really nice too, and especially to our allies all over the world that are petrified to even talk to us anymore because we’re so stupid.

Did Donald Trump just go from casually dismissing the “torture” we did that is so much better than the torture “they” do -- and then get mad about the report filled with all the horrible torture we do and how bad it's going to make us look because of how bad it actually is after all? Yes, we believe that's what happened. And now, not only will our friends in the other parts of our world not talk to us because they think we're so stupid -- and if they're watching Fox & Friends too, they have a point -- but just look at what terrible friends we've been to them, asking them to do us a solid by helping out with our torture programs, and then blabbing to the whole world about it! Non-blond Brian Kilmeade explains that unique angle:

Yeah, because we asked them to do us a favor and be able to interrogate them in certain places, and we’re exposing all of that, so it gets their careers in jeopardy for doing America a favor, and now we’re doing this self-flagellization [yes, that’s the word he used] for everyone to see.

Kilmeade continues, expressing his annoyance with the vice president for saying we made mistakes, because no we did NOT make mistakes. All that torture we did was good and right and necessary and saved lives, shut up, yes it did, SHUT UP!

“We didn’t act out of fear,” he says. “We did whatever we could to stop the next attack. That’s why we hired these guys, trained these men and women, to get something done.”

Then, without a hint of irony or sarcasm as far as we can tell, Hasselbeck chimes in: “They were just following orders.”

We’ll let you sit with that one for a second. Heck, go on, take two seconds.

Trump then assures them that they are right, of course, because that's the whole point of the show:

As soon as the next attack happens, everybody’s going to want to go back to the torture, because that’s what happens. After 9/11, everybody felt strongly about it. It was fine. But you know, years go by, people forget the thousands of people that were killed, horribly, by these maniacs, and now all of a sudden they’re saying, “Oh, the torture, and we shouldn’t have it at all. We should just say to people, ‘Please give us secrets’ and ‘What do you know?’ and ‘Let’s be friends.’"

If only stupid Americans who are not Donald Trump could remember that 9/11 happened, then we'd all go back to thinking raping and waterboarding and even oops! murdering detainees is a terrific idea. Even dumb old John McCain, whose opposition to torture and support of releasing the report on torture, just blows Donald Trump's wind-blown mind. Does John McCain know nothing?

I mean, this is incredible to me. Even watching John McCain and others -- and John McCain certainly, you know, went through a lot — but it’s just inconceivable that they can feel this way. To me. Especially in these times that are so troubled and so violent. I mean, you go back to medieval times, and I used to read medieval times, how vicious — well, this is just as vicious as ever in history, what we’re going through now, what the world is going through right now.

And that is why we must do more torture, even though it's not really torture when you compare it to what Those People do and also medieval times, which Donald Trump used to read about, you know. To prevent another 9/11 and save the American state of Sydney, Australia. Or something.