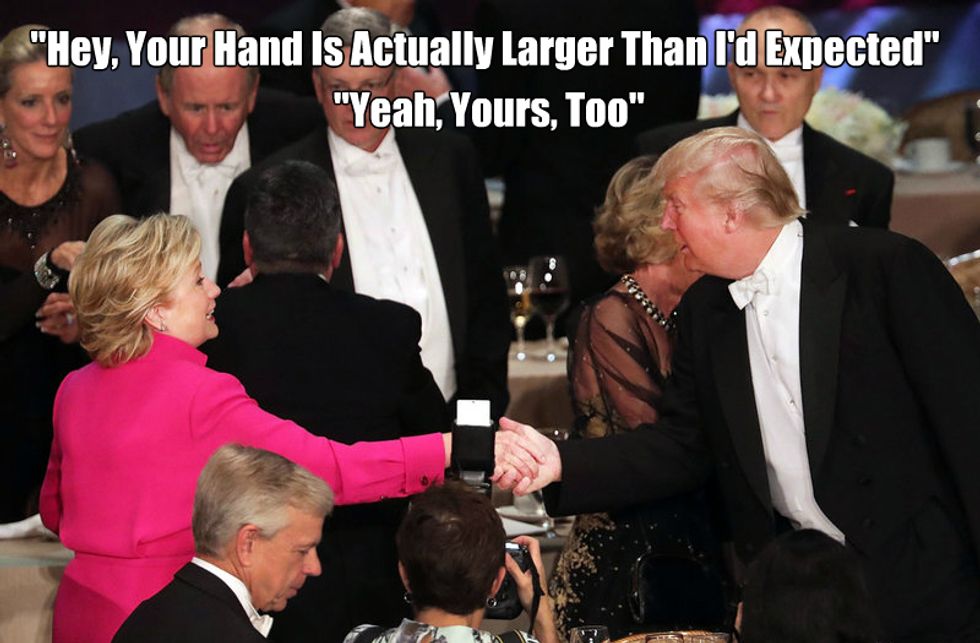 After Wednesday's acrimonious debate, the appearances of candidates Hillary Clinton and Donald Trump were supposed to be lite-n-cheery at Thursday's Al Smith Dinner, a fundraiser for Catholic Charities where politicians are expected to lead off with a couple of self-deprecating jokes before adding some gentle roasting of their opponents. Yes, that went about as well as you'd expect. Trump was apparently only able to afford a professional joke-writer for about half his bit, and then he simply started in with painfully unfunny riffs from his stump speech. Clinton had better material, some of it a little biting, and in a triumph of civility, managed not to throw her drink in Trump's face.

For our money (far less than the pocket change of anyone at the dinner), the best line of the night was delivered by Al Smith IV while introducing Donald Trump: "For the first time, the Catholic Church is not the largest tax-exempt landowner here tonight":

Trump actually managed to get in a couple of actual jokes, though for the traditional "self-deprecating" part of the bit, he went with the oldest possible angle, bragging about how humble he is: "The truth is, I’m actually a modest person. Very modest. It’s true. In fact many people tell me that modesty is perhaps my best quality -- Even better than my temperament." Even so, there were a few funny lines, like this mild zinger: "I have no doubt that Hillary is going to laugh quite a bit tonight, sometimes even at appropriate moments."

Trump also said the two proved they could be civil to each other:

In fact, just before taking the dais, Hillary accidentally bumped into me and she very civilly said, “Pardon me.”

And I very politely replied, “Let me talk to you about that after I get into office.”

Trump's best joke of the night would have been a great place to stop, actually:

I really have to say, the media is even more biased this year than ever before -- ever. You want the proof? Michelle Obama gives a speech and everyone loves it — it’s fantastic. They think she’s absolutely great. My wife, Melania, gives the exact same speech -- and people get on her case. And I don’t get it. I don’t know why.

After that, Trump simply went all Mean Girl, and started getting booed, which is pretty unusual for this thing, they say. Such witty little bon mots!

It's pretty rare to have to fact-check a "comedy" bit, but this is also a lie. Yes, even Donald Trump's jokes are lies. The lowest point in Trump's alleged comedy bit was this hilarious riff on the Wikileaks line from one of Clinton's where she talked about having public and private presentations of positions:

For example, here she is tonight, in public, pretending not to hate Catholics.

It was ... not well-received. Shortly after, Trump went with this charmer:

Everyone knows, of course, Hillary’s belief that it takes a village, which only makes sense after all in places like Haiti, where she’s taken a number of them.

At least Trump thought it was funny -- after a whole string of "jokes" drew angry boos, he said, "We’re having some fun here tonight and that’s good." Yep. On Bizarro Earth, at least. Hello!

Hillary Clinton's performance was a more traditional Al Smith Dinner bit, though also perhaps more caustic than we remember others:

She got the mandatory self-deprecation bit in there: "This is such a special event that I took a break from my rigorous nap schedule to be here." She also got some historical context, and even a mild jab at the event itself, into the riffs:

But, for me, it was kind of ironic thinking about a fiery populist, Al Smith. If he were here today and saw how much money we’ve raised for needy children, he’d be very proud. [Applause] And if he saw this magnificent room, full of plutocrats celebrating his legacy, he’d be very confused.

There was a line about being "up against the highest, hardest stained-glass ceiling" that fell flat, but then Clinton pulled off a classic little bit of setup and comic twist that bodes well for future White House Correspondent Dinners (Crom help us all if Trump hosts any of those!):

Your Eminence, you deserve great credit for bringing together two people who’ve been at each other’s throats — mortal enemies, bitter foes; I’ve got to ask, how did you get the governor and mayor here together tonight?

Nicely done! She also flattered the attendees a bit, saying "I just want to put you all in a basket of adorables." Which Yr Wonkette would like to point out we used as a kicker hed weeks ago. As for her jabs at Trump, they were generally in-bounds, like complimenting Donald Trump for turning over the lectern to her: " I didn’t think he’d be okay with a peaceful transition of power." We also liked her next one, in which she said that after hearing Trump's speech, "I will also enjoy listening to Mike Pence deny that you ever gave it."

And then there was the Statue of Liberty joke, which had more bite to it:

Maybe a “five” if she loses the torch and tablet and changes her hair.

Clinton had her clinkers, too, but nothing that drew boos; she also went Very Serious about Al Smith's legacy, drawing an explicit line between anti-Catholic prejudice of Smith's time and that of some other guy today:

when I think about what Al Smith went through it’s important to just reflect how groundbreaking it was for him, a Catholic, to be my party’s nominee for president. Don’t forget -- school boards sent home letters with children saying that if Al Smith is elected president you will not be allowed to have or read a Bible. Voters were told that he would annul Protestant marriages. [...]

Those appeals, appeals to fear and division, can cause us to treat each other as the Other. Rhetoric like that makes it harder for us to see each other, to respect each other, to listen to each other. And certainly a lot harder to love our neighbor as ourselves.

In fact, that bit about the persecution of Catholics was particularly well-targeted:

Clinton didn't have to mention anything about the supposed "threat" of terrorists disguising themselves as Syrian refugee kids. And she was humane, not nasty. Or at least she hid her hatred of Catholics very well by suggesting she's some kind of crazy wild-eyed Methodist.