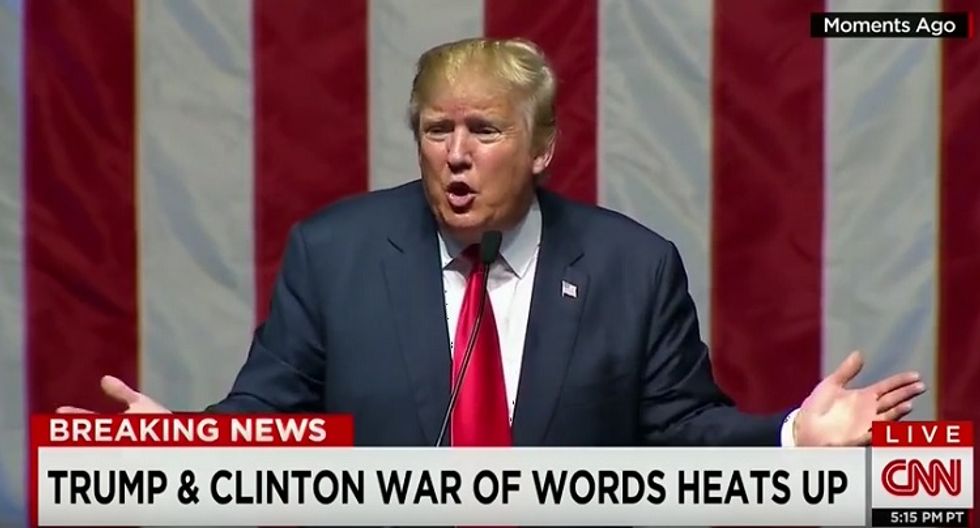 Donald Trump seems to have developed an unhealthy obsession with Hillary Clinton's ladyparts. At a festive, Christmas-themed rally (you could tell because the security goons beat protesters with boughs of holly) in Grand Rapids, Michigan, Monday night, Trump explained that Clinton is the losingest loser ever to lose all the time, because despite being the favorite at the start of the primaries, Barack Obama did sex to her, after which they presumably enjoyed a cigarette and he appointed her secretary of state, as a gentleman does:

[Everything (?)] involved with Hillary has been losses. You take a look -- Even her race to Obama. She was going to beat Obama. I don’t know who’d be worse. I don’t know. How does it get worse? But she was gonna beat, she was favored to win and she got schlonged. She lost. She lost. But I watched her the other night. It was hard. It was really hard.

Despite that potential rhetorical boner, Trump clarified that his own schlong was not, however, the least bit affected, since he would much rather think about anything other than Obama schlonging Hillary:

There were a lot of other things on better, including reading books and reading financial papers, which I actually enjoy reading. But I watched her the other night, and I said, "This is not a president."

Probably because she lacked the dignified bearing of a world leader. (Think Progress, we should note, included this helpful explanation: "'Schlong' is a well-known reference to a man’s genitals." Because you might not have known that?)

Trump, who cherishes women, also had to comment on Hillary's having taken a pee break during a commercial, which indicates weakness:

[contextly_sidebar id="3PSiyke3dHMPsRcOOutMjKgiLUjOSYQT"]It's unspeakable, so I'll just perseverate for a nice long time on Hillary making Number One before Phase Two, but god, that's disgusting, do you know women are disgusting and they pee sitting down? I hear they're also filled with goo and squishy parts and bleeding whatevers! How can you stand up to Putin if you pee sitting down? Oh, so awful. Please do not think of Hillary Clinton's old-lady urogenital system, America. It's simply too ghastly and unpresidential.

Update: The Clinton campaign has replied, sort of:

Not surprisingly, the very first tweet in reply to that is all Benghazi, because Logic.