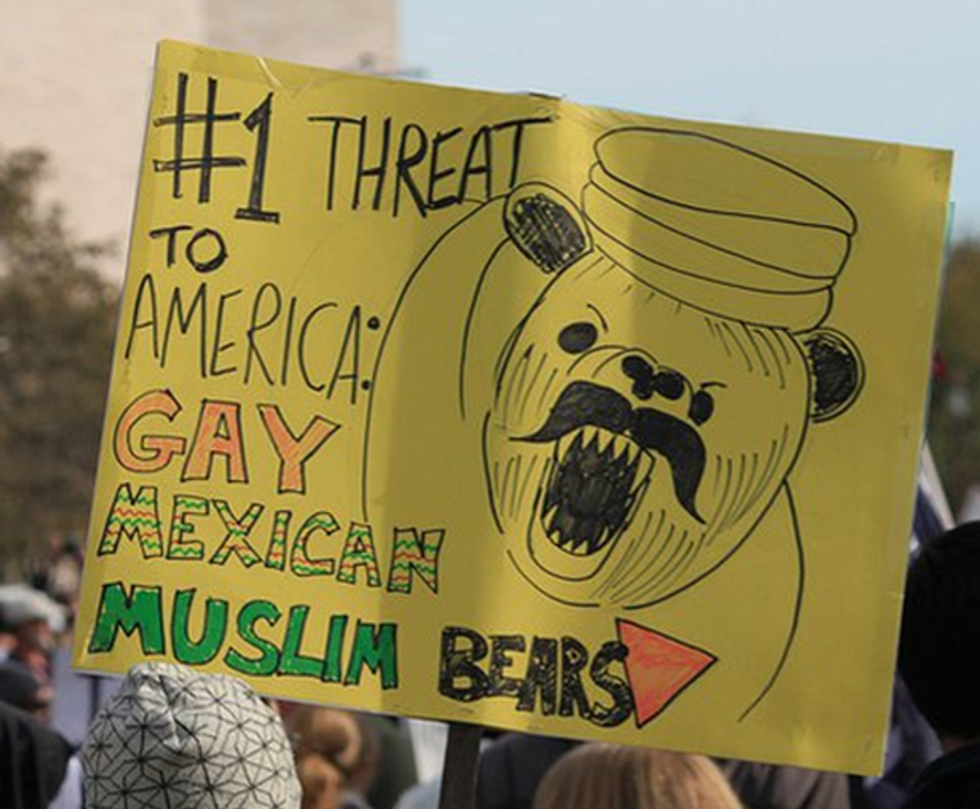 To be sure, the gay bears tend not to be too overt at mosques

Speaking to steaming bag of badger innards Stuart Varney on the Fox Business network, walking slug farm Donald Trump explained Tuesday that he would happily revoke U.S. passports for Americans accused of traveling to fight for ISIS, and that he'd consider closing down mosques in America if they are too sympathetic to radicalism. What's a little religious freedom when Our Nation's Security is on the line?

As Varney reviewed steps the British government (which is not burdened with a bothersome First Amendment) has taken against citizens who went abroad to fight for ISIS, Trump said he would "absolutely" revoke passports so that ISIS fighters couldn't return to the U.S.:

Varney: Now, in the UK, in Britain, they’ve obviously got a terror problem. They’ve got a lot of youngsters going over to fight for ISIS, about -- just under 1,000 are going over there, and they’ve got a whole new series of proposals to deal with this, including withdrawal of passports from some of these people who’ve gone --

Varney: And closing some mosques, would you do the same thing in America?

Trump:  I would do that. Absolutely. I think it’s great ... If you go out, you go fight for ISIS, you can't come back.

Varney: Can you close a mosque? We do have religious freedom --

There's a little bit of cross-talk in the transcript that makes it look like Trump's saying he'd "absolutely" shut down mosques, but in context, it's clear he's mostly enthusiastic about revoking passports. He really wants to do that, but sure, maybe if mosques are "loaded for bear," we should shut them down. Or at least look at it. It's not like there's a law against shutting down houses of worship, as long as they're really unpopular. We're not sure whether Trump is still saying that he'd beat ISIS by taking all their oil, presumably sneaking it out in our pockets like in The Great Escape, or if he's just mindlessly saying "yeah, good idea," the way he does.

Yr Wonkette has so far been unable to find any examples of mosques organizing bear hunts, which we are informed by reliable sources are more likely to be conducted by gay bars.

As to the question of whether the U.S. is actually revoking passports of suspected ISIS fighters, it looks like we're not, since California Congressschmuck Scott Peters introduced a bill to require it.

We also found an interesting American University article suggesting that doing so would be of questionable constitutionality and, more significantly, of little utility, since most Westerners who go to Syria or Iraq to join ISIS "are either killed in action, remain abroad, or promptly arrested either en route to Syria or as soon as they return home." Imagine that: yet another measure that sounds like it would Get Tuff on Terror but would be of limited value compared to current law enforcement methods, which are already keeping us safe.

Just to be sure, though, we'd better be ready to close some mosques. Just in case the bears come for us, like Reagan warned in 1984:

If there is a bear, that is.