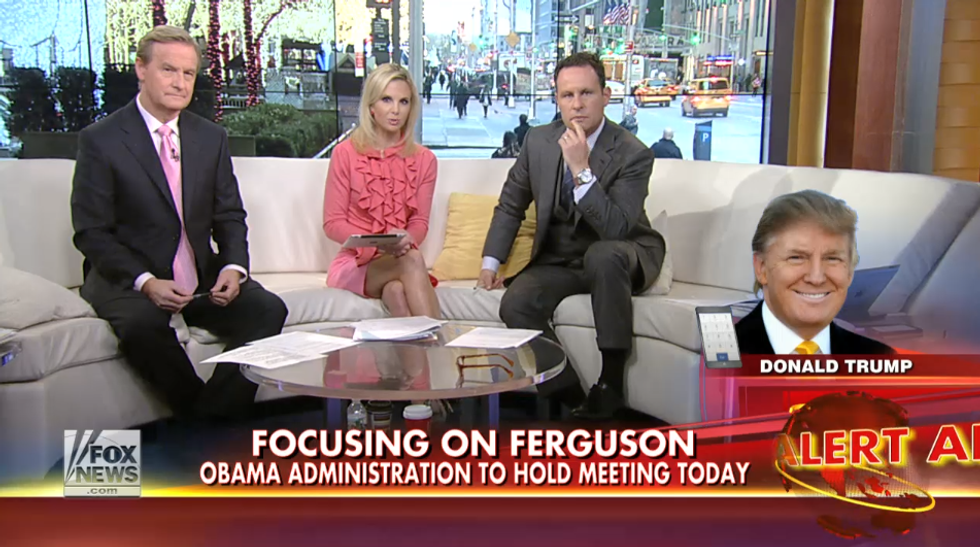 The brain trust that is Fox & Friends has a very important question for America: "Is Obama administration inciting violence in Ferguson?" The answer is yes, duh, that's a rhetorical question, but let's turn to YOOOOGE brain guy Donald Trump to further explain. With all hell breaking loose in Ferguson, Missouri, how can we blame this on President Obama? Trump knows just how!

Well, what we need is real leadership. And it’s blowing up, this whole situation. It’s really blown up. I’ve even seen in New York City there’s gonna be protests having to do with unrelated things. And you have a country that’s a real mess right now, and I haven’t seen division like this in many years.

What kind of Real Leadership should the president be showing right now? Who knows? Probably something to do with not being a black president, for one thing. Fortunately, the blonde lady asks some more hard-hitting questions to really get to the truth of how Obama is failing in Ferguson by, um, being Obama. Sure, he's meeting with his cabinet today to talk about the situation in Ferguson, but pffft, like that counts.

"I think they’re being very hard on law enforcement," Trump said, "at the same time they’re really inciting people to go out and do what they’re doing."

Yes, we are also disgusted that the president and his entire administration, including that evil Eric Holder (IMEACH!) traveled to Ferguson to burn down some stores and scream "BLACK RAGE!" and "FUCK THE POLICE!" through a bullhorn, instead of showing Real Leadership. And you know, Ferguson used to be such a nice place before Obama failed to Real Leadership there. Some of Donald Trump's best friends are from Ferguson, so he knows what he's talking about.

I knew somebody, and actually know somebody, who lives in Ferguson, and they can’t believe what’s happening. You know, they had a community that really worked, or seem to have worked, and now all this hatred’s coming out, and it’s a tremendous hatred. And the police are on one side, and other people are on the other side, and you have so many other people inciting and trying to get their own two cents in and trying to incite problems, and you know who the people are, and they’re the same people who always incite problems.

Who exactly are the "other people"? We can only guess. But please, Mr. Trump, we'd love to know exactly how Officer Darren Wilson shooting an unarmed teenager to death and getting away with it -- and some "other people" being a tad upset about that -- really is the president's fault when you think about it the right way.

It is a real difficult situation, and we need leadership at the White House level, but you know in all fairness, African Americans have fared very, very poorly. You look at the statistics -- very, very poorly under President Obama. You would have thought it would be the opposite, but their numbers are horrible under President Obama. They’ve done very poorly, worse than every other group. And you really thought it would have been the other. You know, the dream that President Obama was focusing on when he first got elected, it hasn’t turned out to be.

You would have thought African Americans would be flourishing under President Black Man for no particular reason at all, ahem, except that the president did run on a platform of fixing all of black America's problems with his magic wand and maybe some unicorns.

But as Trump has explained before, the president has turned what was once a lovely post-racial colorblind country into a cesspool of hatred, with the help of "other people," and now no black man will ever be president again because of how electing the one black president the one time has proven what a disaster that is. Damn shame, really, because African Americans deserve so much better. Like, maybe, Donald Trump.

Oh, and in case you're not done throwing up just yet, Donald Trump also has some deep thoughts on the reversal of sportsball star Ray Rice's indefinite suspension from the NFL. If you hate yourself enough, you can watch Trump explain why Rice might have maybe done a bad thing that one time, but come on, he has apologized so much -- he should stop doing that; enough is enough -- and besides, this is America, where everyone deserves a second chance.