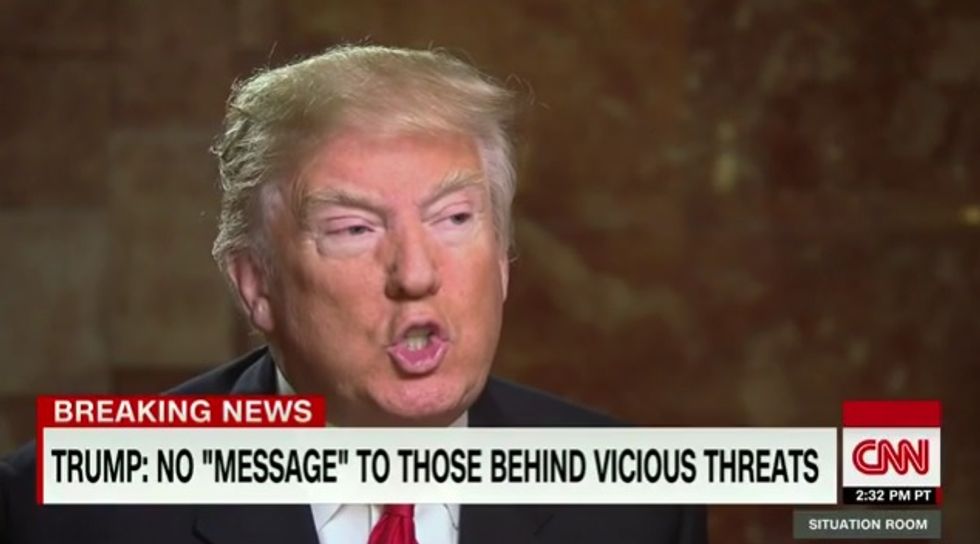 He'll never be president, but he will be declared God of Narcissism

You'll be glad to know that Donald Trump has finally taken a firm position on the death threats and ugly anti-Semitic images sent to Julia Ioffe, the journalist who wrote a profile of Melania Trump in GQ. Unfortunately, that position is that he is very disgusted with the media for lying all the time, and while he hasn't read the GQ profile, he's heard it's very unfair, very nasty (it isn't). Oh, and the death threats and the anti-Semitic insults hurled at Ioffe by his fans? Eh, he can't be bothered to think about those. Trump explained to Wolf Blitzer why he and Melania are the real victims here, in a CNN interview bite Wednesday.

There wasn't anything particularly nasty in the GQ piece, although it did reveal that Melania has a half-brother whom her family has never acknowledged; even worse, it suggested that her caviar-based skincare products were less than a huge success. That was enough for Melania to condemn the article, and to unleash the Trump supporter Online Flying Monkey Brigade, which bombarded Ioffe with death threats and amusing photoshop jobs of her as an Auschwitz inmate. All in good fun! So here's what Trump had to say about all that:

Blitzer specifically asked Trump to comment on the anti-Semitic attacks and death threats sent to Ioffe: "These people get so angry. What's your message to these people when something like that happens?"

Trump, of course, pretended he hadn't even heard the question. What question? Instead, he explained that the article was very inaccurate and nasty, although he hadn't read it.

I'm married to a woman who is a very fine woman. She doesn't need this, believe me. She is very, very successful, she did tremendously well as a top model, she made a lot of money, and she's a nice person... This is a very high-quality woman who loves people and has a big heart. She doesn't need to have bad things said about her.

It's such classic Trump. Your fans sent a journalist death threats and a cartoon of someone shooting a Jew through the back of the head. What do you have to say to that? Oh, yes, your wife is a hot model, very successful. Journalists should be more responsible. Also, while he was at it, he went back to his gripe that Ted Cruz (or "they") used those old pictures of Melania before the primary. How very unclassy. "They shouldn’t be doing that with wives."

Blitzer, to his credit, made a game attempt to get Trump to address the actual question: "But the anti-Semitic death threats that have followed --"

Blitzer: But your message to these --

Trump: You mean fans of mine?

Blitzer: Supposed fans of yours, posting these very angry --

Trump: I know nothing about -- you'll have to talk to them.

Blitzer: But your message to these fans is?

Trump: I don’t have a message to the fans. A woman wrote an article that was inaccurate. Now I'm used to it. I get such bad articles. I get such -- The press is so dishonest, Wolf, I can't even tell you. So dishonest. There's nothing more dishonest than the media.

Death threats? Pfft. Why would he want to condemn anti-Semitic death threats? He's a busy man. He didn't send any death threats, Melania never photoshopped a yellow star onto Ioffe, and so that's where it ends. This is an interview about Donald Trump and how he's been victimized, after all. Who gives a shit about some stupid Jew journalist who's getting death threats? Isn't the media terrible and dishonest? Also, Donald Trump doesn't know anything about white supremacists, exactly. Who are they? Maybe you could put together a list and he'll see if they're bad.

But you know who's really sacrificed? Donald Trump has sacrificed for his country, as he explained elsewhere in the interview:

“I’ve given up a tremendous amount to run for president,” Trump told Blitzer. “I gave up two more seasons of Celebrity Apprentice.”

It's almost as if people don't appreciate everything Donald Trump has had to put up with for Making America Great Again.