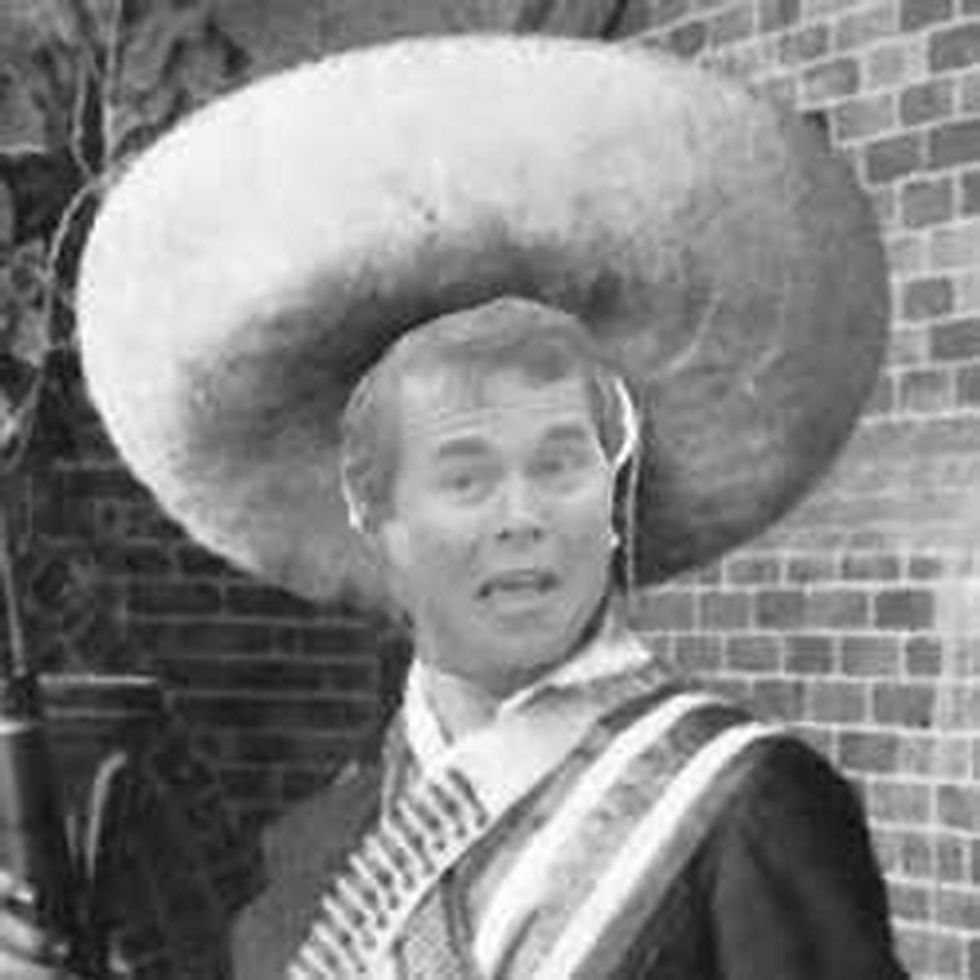 Louche stool Donald Trump gave an exclusive interview to Dead Breitbart's Home for Terrified White People on Wednesday, and revealed that not only is he certain he'll be elected president in 2016, but he's pretty sure he'll win re-election in 2020 and will be the second coming of Ronald Reagan. And how will he manage that feat? By saying shit like this:

“I like Jeb,” Trump said. “He’s a nice man. But he should really set the example by speaking English while in the United States.”

Oooh, good one! Guess Trump won't have to worry about shaking hands and making up with Bush anytime soon. Not that he would, of course, because of the germs. Breitbart horcrux Matthew Boyle provided helpful context with an actual example of Jeb! Bush el-speako-ing la Spanish-o:

“El hombre no es conservador,” Bush said in Spanish of Trump in Miami, according to the Tampa Bay Times. That means, according to that newspaper, that Bush is saying of Trump: “The man is not conservative.”

We like that careful attribution, making it clear that nobody on the Breitbart staff would lean far enough into the gutter to translate those gangster sounds that came out of Bush's mouth.

“Besides, he tries to personalize everything. If you’re not totally in agreement with him you’re an idiot, or stupid, or don’t have energy, or blah blah blah,” Bush continued in English, according to the Times.

Boyle did not attempt to provide a translation of "blah blah blah" into Spanish, because this is America, goddamnit, and if you're running for president of America, you speak English, for godssake. If any of the Founding Fathers had ever spoken languages other than English, we certainly would have heard about it by now, and they did not, because they made America great, and a great America is an English-speaking America.

Trump had little patience for the notion that he's not a conservative, telling the internet's primary home for frothing rightwing freaks that it all depends on how you define "conservative."

Look, if Donald Trump says he's a conservative, then conservatism is what Donald Trump does, not some weird adherence to a bunch of ideological "principles." What conservatism really means in 2015, after all, is telling the Mexicans to go back where they came from, and to take their stinking Latin language with them, too. Here's a scary thought: What if all the contenders in the 2044 Republican primaries try to present themselves as the true inheritor of the Trump legacy?

Trump also took issue with Marco Rubio -- and seriously, when he's in America, shouldn't he call himself Mark Blond? -- for having the nerve to question the perfection of Trump's campaign slogan. In Nevada this week, Rubio suggested that America already is great, a notion that Trump found laughable, since, as we all know, America sucks right now, it simply does. It is such a pit, just the worst pit ever, this country, because of people who won't speak English or vote for Donald Trump:

You have to say "again," you really do, and you have to say it in English. This is so obvious that Donald Trump has a hard time not vomiting when people don't say "again," or say "again" in some other language, which the newspapers say is something like "de nuevo," but we wouldn't know because we're Americans and that is not something you would say in America if you want to be a great American leader who will make America great AGAIN. Donald Trump doesn't think you need to press anything to hear English, and Yr Wonkette can confirm that no number combination we've tried has proven capable of rendering the man's words into our language.