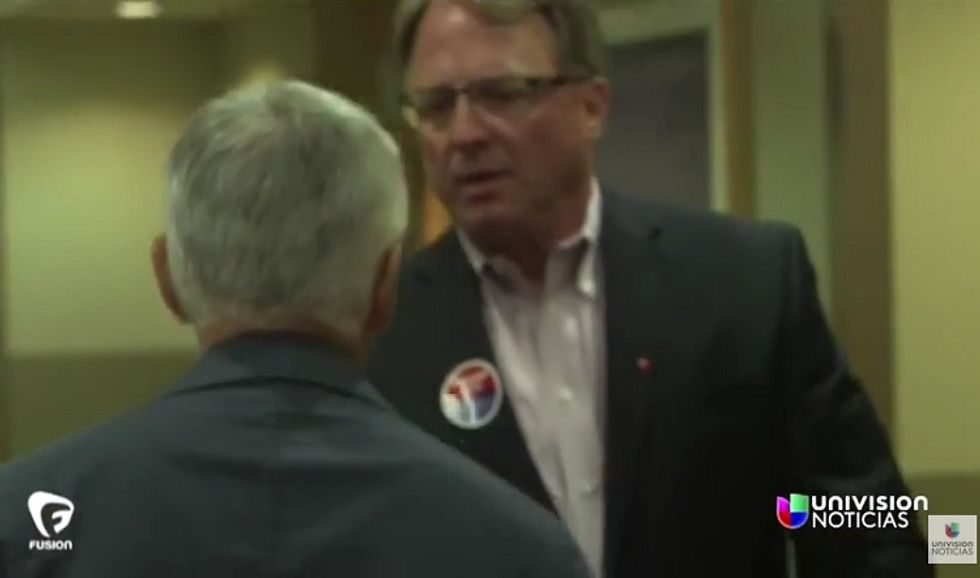 So here's a charming addendum to Tuesday night's Donald Trump presser in Dubuque, Iowa, when the Human Flannel Moth deported Univision news anchor Jorge Ramos for being out of line. Once Ramos was out in the hallway, an as-yet unidentified Trump wannabee decided that it was time to give the veteran newsman a good talking-to. Not that the guy knew Ramos was a veteran newsman; all he could see was an uppity foreigner who needed to "go back to Univision."

“You are very rude, it’s not about you,” the man said to Ramos, pointing a finger in his face. “Get out of my country.”

“Well, whatever, no,” the man shot back, waving his hands. “Univision, no.”

Honestly, can you blame the guy? He was just continuing Trump's mission and telling a damn foreign to go back to Univisia or whatever third-world hellhole Ramos snuck in from. Miami? See!

Hope Hicks, the chirpy Trump staffer later seen in the Univision video inviting Ramos back to the press conference -- just as long as he waits to be called on, does he understand that? -- told the International Business Times that the shouty guy was not with the Trump campaign:

“He is not affiliated with the campaign,” Hicks said over the phone. “We have 11 staffers in Iowa and this gentleman is not one of them.“

ThinkProgress notes that Trump's refreshing rejection of Political Correctness has left some of his supporters feeling free to say things that apparently they've been suppressing under the tyranny of the Obama administration (apart from every time they've written a comment on a website, ever). After Trump's big give-the-white-people-boners speech in Mobile, Alabama, over the weekend, landscaping worker Jim Sherota shared with the New York Times a terrific, huge, classy idea that he thought up all by himself, and that he thinks would be really cool for Trump to adopt:

Hopefully, he’s going to sit there and say, "When I become elected president, what we’re going to do is we’re going to make the border a vacation spot, it’s going to cost you $25 for a permit, and then you get $50 for every confirmed kill ... That’d be one nice thing."

Sounds like he has a whole list of terrific ideas! We hope he'll send that along to Trump, who might be so grateful that he'd appoint Sherota Secretary of Beaner-Shooting.

And then there were the two brothers in Boston who last week beat up a homeless Latino man with a metal pole and then urinated on him -- bet they made a hilarious joke about how now he really had a "wet back!" Those gents explained to police that they were merely Protecting America: “Donald Trump was right, all these illegals need to be deported.” Trump initially replied to a reporter's question about the incident by saying he hadn't heard anything about it, but he didn't seem too worried about it, either:

After giving it a little thought, Trump decided that perhaps beating people with metal poles and pissing on them isn't a great thing. Or at least something he should say isn't such a good idea:

As for the shouty guy in Dubuque, neither Trump nor his campaign appears to have condemned the guy. Why would he? He's just passionate, and not violent at all.

If you want a vision of the Donald Trump future, imagine an angry white asshole shaking his finger in a minority's face and telling them to go back where they came from -- forever.