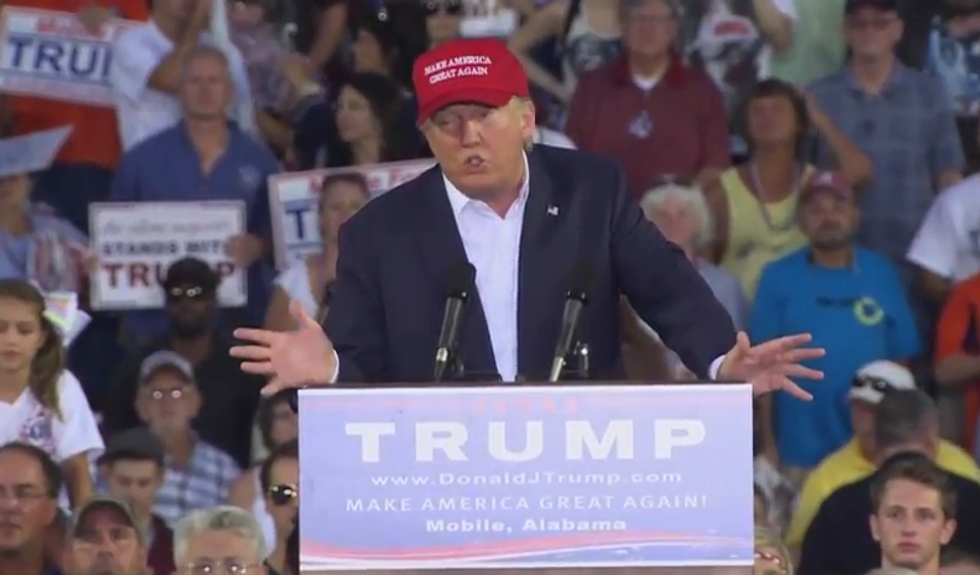 You know you want it

Donald Trump held a rally in Alabama on Friday, a real classy event, the biggest one yet, with tens of thousands of people in attendance, all of them terrific -- even the one dude at the rally who shouted "White power!" Because if there's one place in U.S. America where you should be able to proudly express yourself, even if your self is a white supremacist dickbag in Mobile, Alabama, it's definitely at a campaign event for the presidential candidate who claims in every speech, "It turned out I was right" to accuse Mexico of importing rapists and murderers to America, all the time, every day, because someone is doing the raping, and, Trump has insisted, it's not him.

Asked about the "White power!" incident, as well as an incident last week in Boston when two Trump supporters beat up a homeless Hispanic man because they think Trump is right about how "illegals" are destroying America, Trump campaign manager Corey Lewandowski explained on CNN, "Nobody's condoning violence. Mr. Trump would never condone violence." While Lewandoski said he didn't know about the one white supremacist guy in the Friday night crowd, he insisted that "we should not be ashamed to be Americans. We should be proud of our country, proud of our heritage, and continue to be the greatest country in the world."

Feel free to read between those lines all you want.

Trump's speech to the folks of Alabama on Friday was what we've come to expect from him on the campaign trail. He called out Jeb Bush by name, insisting that he's too "low energy" to be president. In case you're wondering if that's a slightly classier way of saying Jeb is a weak pussy loser man-child, yes, yes that's exactly what it is.

"I just hate gutless people," Trump said during his speech, dismissing the entire Republican field and probably everyone else in America who is not Donald J. Trump, if we're being honest.

The crowd loved it. Every word from Trump's mouth -- that Americans are a bunch of "dummies," ill-equipped to outsmart the wily Mexicans and Chinese, who are far better at life than we are; that Trump is kicking so much ass in all the polls, he wishes we could make like other countries and hold an "expedited election" so he could be president RIGHT NOW; that he is "tired of nice people" -- the sweet home Alabamans cheered and hooted and swooned and loved every single line of it. Well, almost every single line:

Trump's recently added spiel to his stump speech about how much he loves women, and how Jeb Bush is such A Idiot for wanting to defund women's healthcare, and how Trump will be SO TERRIFIC on "women's health issues" -- that was greeted with stone cold silence and, no doubt, a lot of slack-jawed disbelief. You can turn on a crowd of 30,000 Trump fans by promising to get rid of all the Mexicans, but promising to fund women's healthcare? Yeah, not so much. Which is sort of a shame:

But other than the chick stuff, the crowd was mad crazy wild for Trump, self-professed lover of free trade, who promised to bring Oreos production back to America by taxing the sheeeyit out of Nabisco's trucks coming in from Mexico. How does that even make sense? Don't worry about it, he's going to Make America Great Again! That's all you need to know.

On "CBS Sunday," Trump further elaborated on his immigration plan and the BEAUTIFUL wall he's going to build. Not only is his wall going to be beautiful, he said, and not only will he force Mexico to pay for it, but, he added, it's going to have a special door in it:

This will be a wall with a big, very beautiful door because we want the legals to come back into the country.

Now, a thinking person might wonder if that means Trump is suggesting all immigrants, or people who even just look like immigrants if you know what we mean, and we know that you do, should be rounded up and sent back to wherever, and then President Trump's administration will figure out which ones had a legal right to be here. Those lucky deported folks will then be allowed to pass through the Beautiful Trump Door of the Beautiful Trump Wall. Not that Trump's base are thinking people, mind you; they're just really turned on by a guy who is so very proud to be such a jerk, who isn't afraid to tell The Truth, as they understand it from watching Fox News and listening to Donald Trump:

Cheryl Burns, 60, was on a road trip from California when she heard that Trump would be in Alabama. She turned her car around and got in line, warning people of what happened to states when liberals took them over.

“There is no more California,” Burns said. “It’s now international, lawless territory. Everything is up for grabs. Illegal aliens are murdering people there. People are being raped. Trump isn’t lying about anything — the rest of the country just hasn’t found out yet.”

Burns is absolutely right, of course. We are blogging this report to you from the lawless bowels of a once great state, our windows blacked out, covering our ears to muffle the constant sounds of raping and murdering taking place all around us. Unless that's just a neighbor blasting some 90s-era U2 while having a backyard BBQ. So hard to tell the difference.

It is probably too late for us, here in former California, but not for the rest of you, America. Run, don't walk, to your nearest Expedited Elections Office, to demand that Trump is elected president right now, this very second, before it's too late.