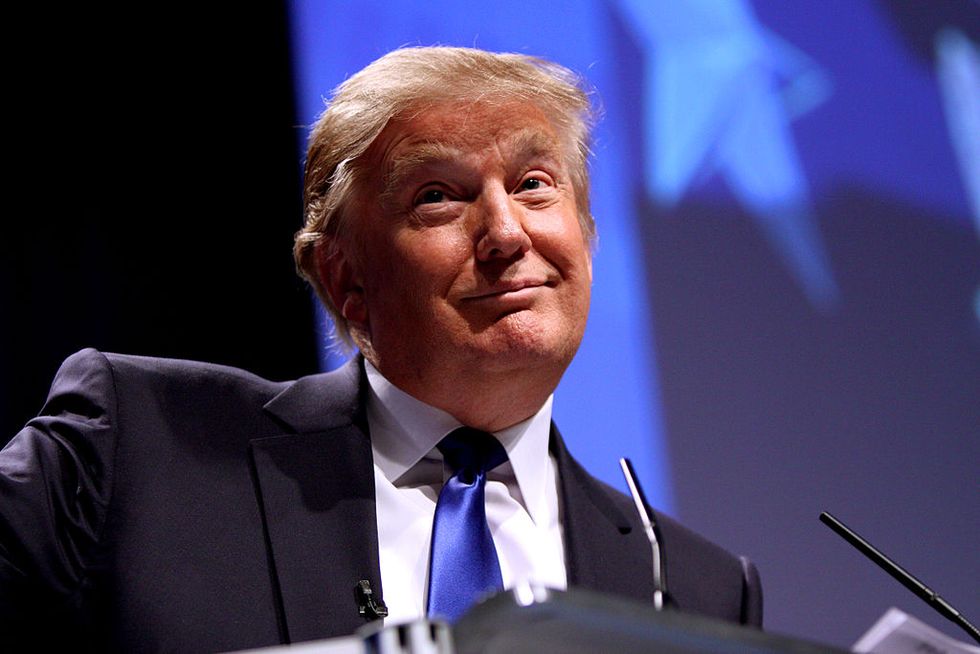 Who’s the soulless puffy prick who will primary those other dicks in 2016? Trump! You’re damn right. (But probably not.)

According to Donald Trump, Donald Trump is looking to get back in the presidential campaign game. And this time he’s totally, 100%, cross-his-heart-hope-to-die-but-still-have-his-epidermis-cryogenically-frozen serious about it.

“Everybody feels I’m doing this just to have fun or because it’s good for the brand,” Trump said in an interview with The Washington Post. “Well, it’s not fun. I’m not doing this for enjoyment. I’m doing this because the country is in serious trouble.”

With a soaring stock market, shrinking deficit, and low unemployment, one can understand the serious trouble Trump refers to. And Donald T. is just the right man to save us from this danger. A man with the expertise of investing his inheritance into projects that made him insanely rich before inevitably filing for bankruptcy. Boom, bust, bail out, repeat. Just like the Founders intended. Isn’t it time the country moved on from the worn, Obama? I Guess He's Pretty ReliableTM brand in favor a bolder, Chapter 11 PlatinumTM brand?

Trump, who was totally serious and also leading some polls during the last election cycle (because only the best for Republicans), is just as totally serious this time. To make it happen, he's hiring former staff from only the best and brightest campaigns: McCain '08, Santorum '12, et cetera. He'll also consider not hosting his important reality television show and getting a PAC together, even though he doesn't need the money (but he'll take it if it makes you feel better).

What Trump won't do is punt on questions about whether he thinks Obama loves America (will always love Kenya first), believes in evolution (well some of his pageant winners do), believes Obama is a Christian (he'll see your "I don't know" and raise you a "Secret Muslim"), or believes in global warming (LOLZ! There's still a Winter, dummies ). This is his time.

“I am more serious about this than I’ve ever been before,” Trump said in the interview.

“People around the world are laughing at us,” he said. “Look at China, they’re killing us, taking our jobs.”

“Now let me show you my new Trump Campaign Wear Collection. It's made in China for dirt cheap," he probably chuckled to himself but didn't say out loud because he's now such a SERIOUS and disciplined candidate. Good luck, Donald. See you on the trail! (And by "trail" I mean "television when we're stuck in some airport bar and can't change the channel.")