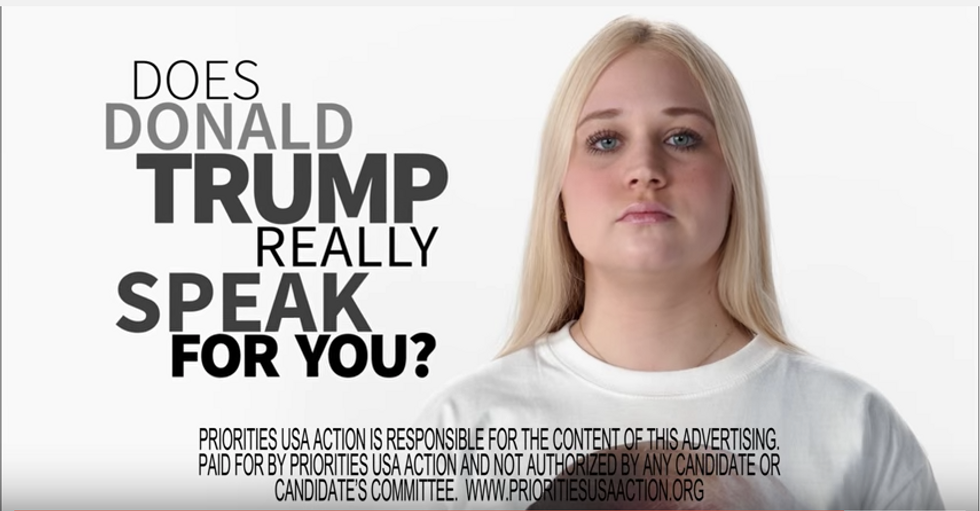 Another day, another way the world is being "very nasty" to poor ol' Donald Trump! What is it this time? Is it a New York Times exposé looking at how gross Trump has been to women he's known throughout his life? No, silly, that was Sunday! Today he is mad about an attack ad made about him by Priorities USA, a pro-Clinton PAC, which features a bunch of women lip-synching to things he has said, with his very own voice.

CAN YOU EVEN BELIEVE IT? Where did they even get these "recordings" of Donald Trump "saying things" anyway? Obviously if they were honest and not nasty, they would only use the nice, non-offensive things he has said in their attack ads. Like the time he said "Pass the salt" or something. OR, they could politely ask him what he thinks would be fair to criticize him for, or what quotes of his he would prefer they use.

Even better, they could take him at his word that "Nobody respects women more than Donald Trump" and stop trying to prove that he doesn't by directly quoting him saying gross things about women. Many of which occurred while he was an "entertainer" and merely graciously giving the people what they wanted, which was to hear Donald Trump say rude things about women. Duh.

All Trump is asking is that they PLAY BY THE RULES. The rules where Donald Trump is allowed to say anything he wants about anyone, like how maybe some lady has a big ass or a face no one would vote for, or how President Obama isn't really a citizen of the United States, or how he'd totally bang his daughter if she were not his daughter, and no one is allowed to say anything bad about him, ever. I believe he made that very clear when he said that one of the first things he would do as president would be to "open up libel laws" so that he can sue journalists who write negative things about him and "win lots of money."

The part Donald objects to in this particular ad is that when he said, "You can tell them to go F*ck themselves" he was speaking of CHINA not of women.

NOW SURE. I suppose one could say that literally nothing in the ad directly says "Here are a bunch of things Donald Trump has said about women." You know, because it is basically just a collection of rude things Donald Trump has said, followed by the question "Does Donald Trump really speak for you?," and a large amount of the rude things he has said happen to have been about women. Is that his fault? Not entirely! He has also said rude things about Mexicans, Muslims, black people, and basically every other type of human on earth that is not Donald Trump, so it is not as if he is not diversifying his mouth garbage.