Donald Trump Is Losing Because, At Heart, He's The Class Clown 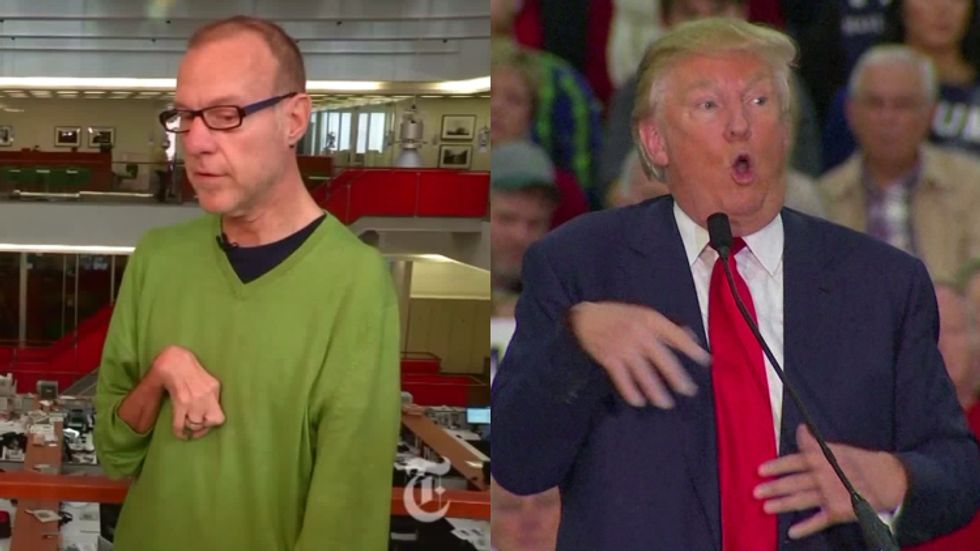 Earlier this week I had the unpleasant realization that I have something in common with Donald Trump. I was at work, and I cracked a joke that I shouldn't have.

I do this a lot, and every time, I tell myself: next time I'm going to hold my tongue. But then I see an opening to make a great (terrible) gag, and I go for it instinctively, like a hungry orca to an injured seal.

You see, I have a compulsive need to be entertaining... just like Donald Trump.

This compulsion is a keystone of Donald Trump's personality, yet as far as I can tell, none of the far, far too many "pieces" on Trump's mental makeup have specifically focused on this as a major reason for the beshitted state of his campaign.

Most long-range analysis of Donald Trump's peculiar character focuses on three prominent traits: his shameless, constant lying; his Jovian ego (which likely conceals deep insecurity); and his desire for legitimacy and validation in the eyes of his betters.

These are all supposed to be impediments to his political success, but Nixon was a bipedal dozen dump trucks of these traits and they didn't keep him from getting elected and then re-elected.

But Nixon wasn't the class clown. Trump is. That's a key difference.

He can just be a joker, a yarn spinner, an instinctive entertainer.

When Trump said Megyn Kelly had "blood coming out of her wherever," he was going for the laugh. When he said "I know words. I have the best words," he was setting up a gag.

The thing with the baby recently really drives this home. That whole shitshow was simply Trump trying to be entertaining! You can tell from his delivery that he's making it into a joke. I might have done something similar up there, if it occurred to me. The only difference is that I'd probably realize the next morning in the shower that I made that woman feel extremely awkward and should probably apologize.

But the real question is: Why can't he help himself? Why isn't he able to rein in this habit that's clearly damaging his campaign? I'm obviously not in a position to know for sure, but I can tell you why I can't help myself in similar situations.

Mainly, it's because being entertaining is, on the whole, a good thing that helps a person make friends. It's a survival strategy for people who aren't especially strong or good-looking, and survival strategies tend to operate as reflexes rather than conscious choices. For all my ill-considered stabs at humor, I'm still connecting at a good rate. It's a net positive, so I go on. Over the years I've developed a rudimentary ability to self-censor. Sometimes. A bit. Enough to keep a job.

Trump's not as funny as I am, and he's a lot richer than I am. These factors make him much more prone to bombing when trying to be funny. People laugh at rich people's jokes because they want rich people to like them, which has given Trump a warped idea of what's actually funny. So Trump probably makes bad jokes more often than I do, yet suffers fewer consequences thanks to his status. People pretend they weren't hurt by the joke. Or if they protest, Trump can write them off because he doesn't need them.

At least he could, before he ran for president. Now it's a little different. Now his bad jokes have consequences. Now he can't play exclusively to his audience of coddled, cloistered white males because they're not the only ones in the room.

I don't know if Donald Trump is constitutionally capable of censoring himself. I suspect he isn't. But even if he is, he can't do it now. His entertaining personality is a huge part of his appeal. It's why he's gotten this far. Take that away, and what's left? Instead of losing by 10, he'd lose by 30. They'd say the Establishment got to him.

No, Trump's going to go down as Trump: The Carlos Mencia of Fifth Avenue.