Donald Trump Makes Healthcare Words, But All The Words Are 'Garp?' 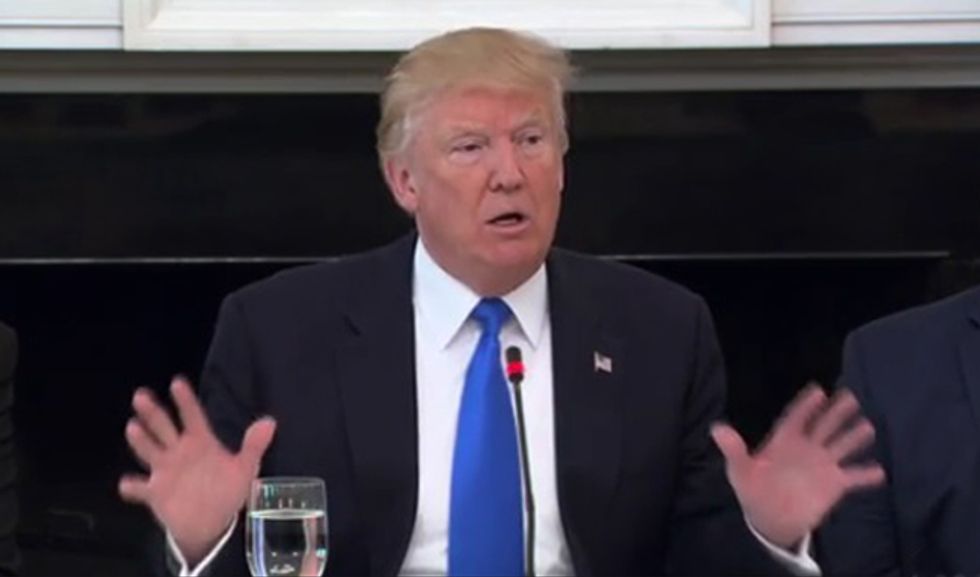 Take a look at these hands...

Donald Trump held his great big Cut HealthcarePalooza lunch with Republicans Wednesday, and nobody noticed so much because he then went on to talk crazy to the New York Times -- so much crazy we needed two articles for it all. But it's worth taking a quick look at some of the hellmadness of that lunch with the senators, which simply underlines what a mess Donald Trump is when it comes to "leadership."

For starters, let's note that Trump was, as usual, fairly unspecific about what he wanted Senate Republicans to do: While he said he wanted them to repeal and replace the Affordable Care Act, he made it clear he'd be OK with a straight repeal, too. As for what should be in that replacement, hey, that's not his job, is it?

"We are in this room to deliver on our promise," Trump said. "We have no choice, we have to repeal and replace Obamacare. We can repeal it but the best is repeal and replace and let's get going. I intend to keep my promise and I know you will, too."

He added: "People are hurting. Inaction is not an option and frankly, I don't think we should leave town unless we have a health insurance plan, unless we can give our people great health care because we are close, we are very close."

Close to what? Close to something great. It was yet another tack from Trump, who clearly has no idea what was in either of the Senate drafts of the "Better Care Reconciliation Act," but knows that he really, really wants a win. And ideally, a far-right win, since he threatened to encourage primary challenges to any senator who wouldn't vote for whatever foul thing might be out there. And while Trump still seemed to think some Republicans might still be working on a third draft of the BCRA, Senate Majority Leader Mitch McConnell was only interested in next week's planned vote to repeal the ACA altogether, with a two-year window for Republicans to write a replacement before repeal kicks in.

Say, would that be bad, maybe? The Congressional Budget Office certainly thought so:

A repeal-only approach, which also lacks the votes to pass, would increase the number of people without health coverage by 17 million next year and by 32 million at the end of a decade, according to a fresh analysis released Wednesday by the Congressional Budget Office.

The forecast by the nonpartisan CBO is nearly identical to estimates the office made in January based on a similar bill that passed the House and Senate in late 2015 — and that was vetoed by President Barack Obama.

Today, the CBO issued a partial report on one version of the second draft of the BCRA; like the earlier version, it would leave 22 more million Americans uninsured after ten years. The analysis did not include the amendment by Ted Cruz that would have encouraged insurers to sell stripped-down policies without essential health benefits or protections for those with preexisting conditions. That plan would have shunted anyone in the individual market wanting real coverage into the equivalent of a high-risk pool, and was opposed by the insurance industry as unworkable. We'd really like to see that CBO score.

McConnell said, "I think we all agree it’s better to both repeal and replace. But we could have a vote on either." However, it's pretty clear the only option that McConnell plans to put forward for a vote is simple repeal, so there can be a record of all the Republicans who voted to kill the ACA outright and the ones who wouldn't, so the latter group can be primaried from the right. Trump seemed pretty jazzed by that prospect, saying, "Any senator who votes against starting debate is really telling America that you’re fine with Obamacare."

As a case study, Trump threatened Nevada Senator Dean Heller, who's up for reelection next year: