Donald Trump Not Prepping For Debates, Will Just Be Himself. Clinton Campaign OK With That 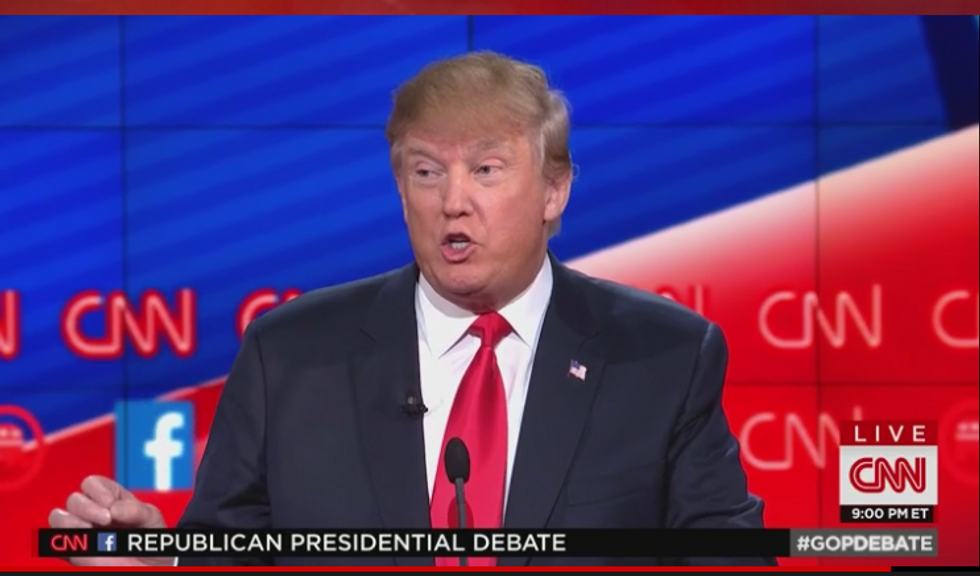 Who needs facts when you've got charm?

Donald Trump is not worried about debating Hillary Clinton this fall, not the least little bit, because he's great at debating. Didn't you see him cream all those stiffs in the primaries? In fact, he hasn't even started preparing for debates, because debate prep would be work might make him all stiff and un-Trumpy. But he'll be right on top of all the facts when he needs to be, he told conservative radio host Hugh Hewitt in an interview Thursday. Or at least all the fact-like statements that he's ever used in a debate.

Trump will be meeting Clinton for the first of three debates on September 26, which is plenty of time to prepare, he told Hewitt. Hewitt asked Trump if he was in "full practice mode" with mock debates yet, and Trump reassured him that, no matter what the other guys do, he's decided to Let Trump Be Trump:

I have not. No, I have not. And I must tell you, I think you and I have a little different mode. I watched [Mitt] Romney went into a log cabin or something and he came out and he wouldn’t talk to anybody for weeks, you know, and all of that, and then he got to the debate and he wasn’t able to speak so well. I’ve seen that, and to a certain extent, you have to be yourself. I do know the issues, I actually know the issues much better than people understand that I know the issues. But I want to, obviously I will be practicing. But I don’t want to put so much practice in that all of a sudden you’re not who you are. Does that make sense to you?

Heavens, we certainly wouldn't want to see Trump be anything less than Full Trump in the debates. For one thing, we'll have all that popcorn handy.

Not surprisingly, Trump also had to bring the topic around to how popular he is. Rather than talk about his debate prep process, he really brightened up when he told Hewitt "they're saying the debate's gonna be the biggest show ever on television, in terms of ratings." Don't you ever change, you special man, you.

Hewitt noted that chances were pretty good Clinton might bring up some of the less than comprehensive knowledge of the world and of governing that Trump showed off during the primary debates, like his not knowing what the nuclear triad is, confusing Hamas with Hezbollah, not knowing how many aircraft carriers the Navy has, and not being clear on the military chain of command. Trump said he'll be ready for whatever Clinton comes up with, because as we all know, he is a very smart man, very smart:

“I know the chain of command, and I will have a lot of things mastered. You know, as I’ve told you, I’ve been a very successful businessman, I’ve never done this," Trump said. "When they asked about NATO as an example, I was asked by Wolf Blitzer, you know, just off the cuff, you know, tell me about NATO on live television."

That really was pretty out of left field, asking someone who wants to be president about NATO. Are they even in the real estate business? But Trump improvised, and that turned out just fine, he says:

After he gave his answer about how other NATO countries are not paying their fair share, "everybody laughed," Trump recalled, "and then three days later, they started saying, you know Trump is 100 percent right.”

Well, actually, almost all of "them" -- at least the ones who know foreign policy -- said that threatening to pull out of NATO was a deeply terrible idea, especially when Russia is trying to gobble up chunks of former Soviet republics in eastern Europe. But yes, everyone Donald Trump listened to -- Donald Trump and his toadies -- all think he's 100 percent right. He also noted he'd said in the primaries that NATO was obsolete because it didn't deal with terrorism, and just last week the Wall Street Journal had a story about NATO finally starting an anti-terror center. "I got no credit for that...If I didn't say that, it never would have happened." Not that he's a narcissist.

Hewitt also warned Trump that Hillary is "gonna try and gotcha. That’s what she’s going to do." Again, not a problem, because whatever Donald Trump doesn't know, doesn't matter. Besides, said Trump, “I have plenty of gotcha for her, too, if she plays that card."

Donald Trump gave a speech about Hillary Clinton, and thanks to the miracle of Twitter, it was fact-checked to pieces while in progress.

Besides promising to come to the debates with as much knowledge as he can make up on the spot, Trump also took a moment to bask in the glory of his boring teleprompter speech Wednesday, and to complain how unfair it is that he even has to have an opponent in the general election, because did you know Hillary Clinton did email stuff that she should already be in jail for? The gentleman who's running for president while facing three civil lawsuits and an IRS audit complained that it's "very unfair that she's even allowed participate in this election" while the FBI is investigating Clinton's email server:

Or maybe he'll spend some time on Twitter. Or reading up on his poll numbers. Or googling "Donald Trump." Or perhaps just staring in the mirror one more time at his own magnificence. Then the Sunday before the debates, he'll watch the shows, and he'll be ready to go.