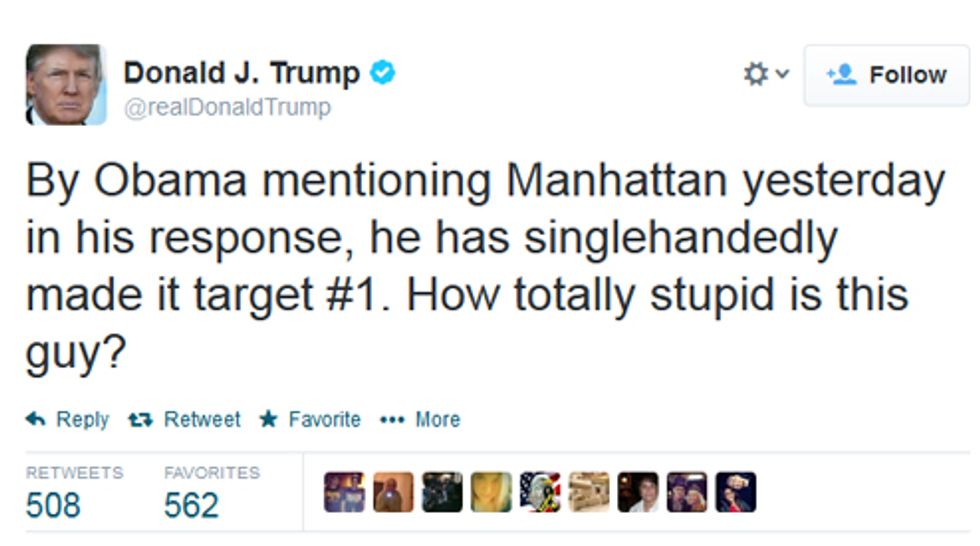 So here is your nontroversy of the afternoon: Donald Trump isfurious that Barack Obama has mentioned the possibility of a terrorist nuclear attack on Manhattan, because, as he told Fox News's Greta Van Susteren today, the President "just put a big target on Manhattan." Damn you, Obama! If only you had kept Manhattan a secret, no terrorist ever would have thought to attack it, and the city would remain safe from terrorist attacks, just like it was during George W. Bush's blemish-free reign.

For the sake of context, as if that mattered, Obama was speaking while attending a conference on reducing terrorists' access to nuclear materials and technology, which is kind of an appropriate place to talk about terrorist nuclear threats. And while maybe the threat was exaggerated after 9/11, it is an actual security concern, and a good reason to, you know, reduce the amount of unsecured fissile materials out there.

Still, Trump is shocked that Barack Obama would give terrorists the idea of nuking Manhattan, which proves that the President is utterly unfit for office:

"I don’t know if this man knows what’s doing at all anymore," Trump said. "He was tired. He looked just exhausted. He’s not natural leader. It’s very hard for him to lead. He had never done it before in his life.

"But when he starts talking about nuclear weapons going off in Manhattan, saying this is a target, do it here…it’s so incredible that a president should make that statement."

If only Obama had not mentioned Manhattan, terrorists almost certainly would have never given the city another thought, and would have wandered off to nuke Poughkeepsie or someplace else.

Next thing you know, Obama's going to do something equally irresponsible like pointing out to Russia that our major cities and military bases might potentially be targeted by intercontinental missiles.

Oh shit, what have we done?