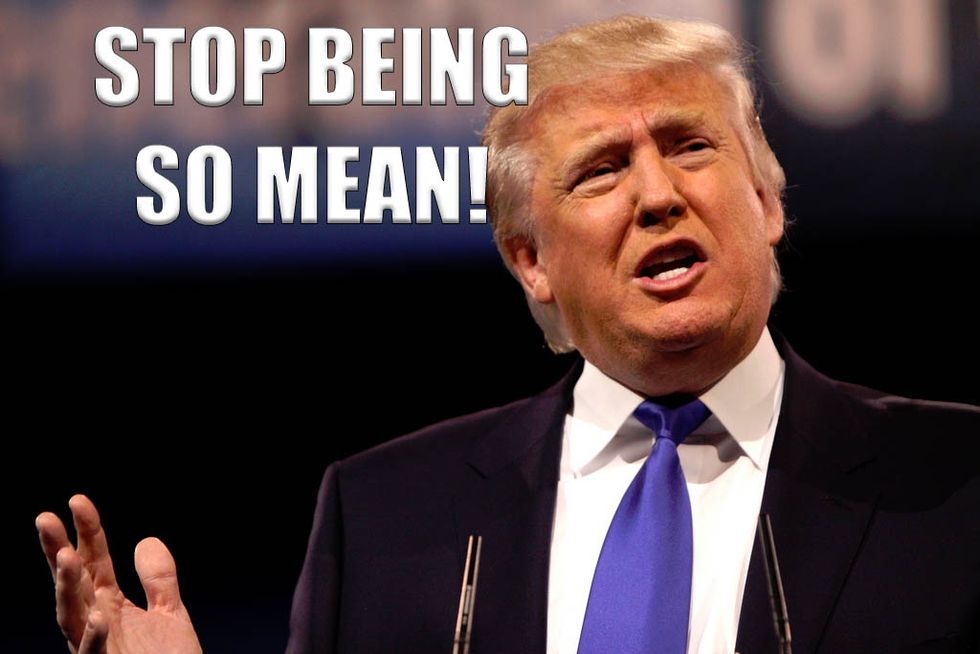 Poor Trump. Poor, pitiful Donald Trump, who accidentally got hired by a minority of Americans via an affirmative action policy known as the Electoral College, for a job he's unqualified to do. And mean black president is being mean to him, meanly:

Oh, the ennui! He's probably having that recurring dream about being in high school on exam day and suddenly realizing HE HASN'T ATTENDED CLASS IN MONTHS AND WILL NOT GRADUATE.

As Bloomberg points out, Trump is probably feeling #triggered right now for a couple of other reasons:

Last week, Obama ordered his United Nations ambassador to abstain from a vote on a resolution declaring Israeli settlements in the West Bank illegal, allowing the measure to pass. Obama also said in an interview published by CNN on Monday that he would have beaten Trump, had he run for a third term. He then cautioned against "tribalism" and "the urge to demonize those who are different" in a speech at Pearl Harbor on Tuesday.

MEAN! Especially the part at Pearl Harbor where Barry Bamz subtweeted Trump by telling him to control his pathetic tribalistic "urges." And, HAHAHA, we agree Trump is probably still Having A Upset because he knows Obama's prediction that he could have won the 2016 election in a walk, and looked sexxxy doing it, is so very true.

Anyway, screw Trump, maybe instead of being inaugurated on January 20, he should just sit in the corner and sob for the rest of his natural life, because he sucks.