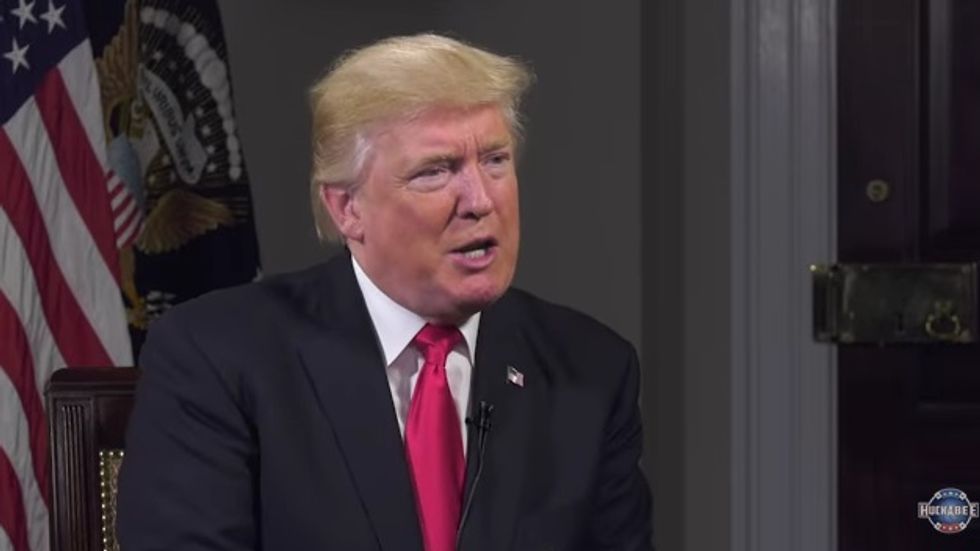 In a Saturday interview with Mike Huckabee on religious cable, Donald Trump explained that everyone in Puerto Rico loves the fantastic job he's done of hurricane relief, said he tossed the very best paper towels in the world to the simple islanders, and while he was at it, took credit for inventing the word "fake," because that's just the innovative kind of guy he is. We'd embed the video, but sometime Sunday it appears to have been pulled (or glitched -- "The uploader has not made this video available") by the Trinity Broadcast Network, where Mike Huckabee is collecting Wingnut Welfare these days. Happily, it was up long enough for folks to get some brilliant pull quotes, like the bit where Huck told Trump he'd seen the video of Trump's visit to Puerto Rico, where "You were a rock star," because of all the cheering and carrying-on:

They were the very best paper towels. Trump always has the best people, the best words, the best paper towels. It was all he could do not to just stand there and Mr. Whipple those towels for hours. But he was having fun and the people loved him, loved him so very much. Why doesn't the media let the president have any fun after a deadly hurricane?

Trump also explained that, out of the entire island's population of 3.4 million people, the only person on the entire island who was critical of him was San Juan's mayor, Carmen Yulîn Cruz, who was a Democratic plant, obviously, even though she's "not a capable person":

"We have the Mayor of San Juan, Puerto Rico, who didn't attend meetings, who didn't work with FEMA, who really did not do a very good job. In fact, did a very poor job," Trump said. "And she was the lone voice that we saw — and of course that's the only voice the media wanted to talk to. And she's running for governor, big surprise."

You know how it is. The media always finds the one troublemaker. But the islanders are actually very happy, simple people. They sing. They dance. They have the occasional paper-towel rumble with the Jets.

Trump was also justifiably proud of having invented the word "fake," which he has deployed to such great effect since it first came forth from his mighty mind:

The media is really, the word, one of the greatest of all terms I've come up with, is "fake." I guess other people have used it, perhaps, over the years, but I’ve never noticed it. And it's a shame. And they really hurt the country. Because they take away the spirit of the country.

OK, so maybe other people may have used the word fake, before -- he's willing to concede the possibility -- but Trump never noticed, because they never put it together with "news." That's a demonstrable fact, as long as you ignore Norm McDonald saying "Here's the fake news" on SNL every weekend in the mid 1990s, or every article about hoaxes and disinformation in the 2016 election. Trump may have been referring to his own special use of the term, meaning "real news I don't like," which he first used, as far as we can tell, when he refused to take a question from CNN's Jim Acosta on January 11 of this year:

"No, I'm not going to give you a question," Trump tells reporter. "You are fake news." https://t.co/gVp2PQ1ucIpic.twitter.com/o2JwpwqBRp