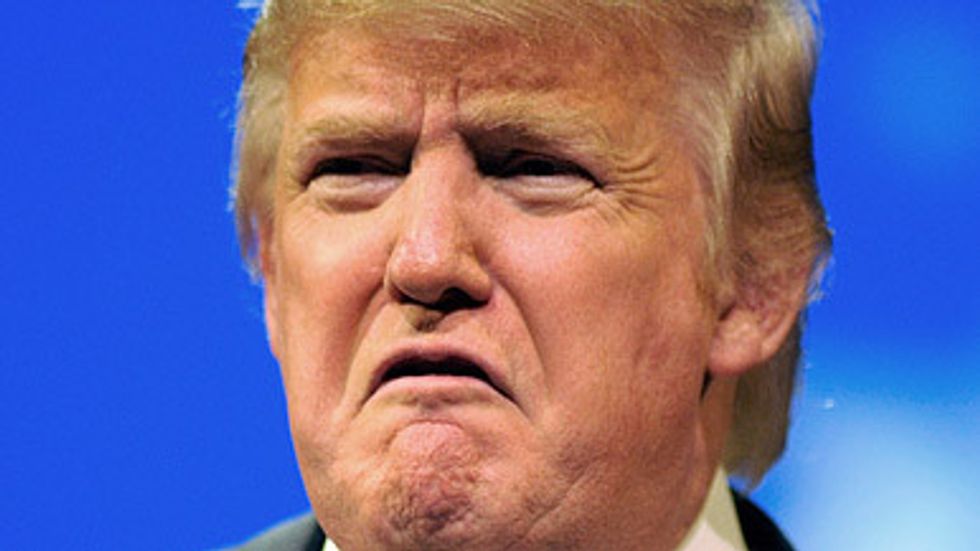 UH OH the Fox News Republican debate scheduled for Thursday night is RUINT, and it's all because of that terrible harpy lady Megyn Kelly and her insistence on bleeding from her wherever like a common menstrual-doer whenever Donald J. Trump is in the room. Trump spent Tuesday threatening to spurn his former lover Fox News if it insisted on letting Kelly be a moderator, and now he's made it official. He QUITS!

“Let’s see how much money Fox is going to make on the debate without me,” Mr. Trump said at a news conference ... where he continued to attack Megyn Kelly and the crew at Fox News, with whom he sparred at an earlier debate.

“It’s time that somebody plays grown-up,” he said.

Just after Mr. Trump started speaking, his campaign manager, Corey Lewandowski, confirmed that he would skip Thursday’s event, saying, “He will not be participating in the Fox News debate on Thursday” and that “it’s not under negotiation.”

[contextly_sidebar id="gD9QHcfH99VvjlDHjWIYR8pJD1s7pi7o"]Sarah Palin's been on his campaign for a week and he's already quitting shit. On the bright side, though: Jeb Bush, this is your chance to be on TV without somebody giving you a bunch of wedgies! Haha J/K, Jeb will manage to give himself a bunch of wedgies, we just know it.

Of course, the Trump campaign has released a statement to prove that it, and not Megyn Kelly and the Fox News TV network, is the real adult in the room. Surprise, it's a whole lot of name-calling and Trump sucking his own dick:

In case you can't read that on your Obamaphone, here you go:

I, Donald J. Trump, am YOOOGE. I wrote the Art Of The Deal, which is more terrific than the Bible. Barack Obama is stupid, and Roger Ailes and Fox News are stupid. Donald Trump is the winner of all the debates, and you are weak. Make America Great Again!

JUST FOOLING, THAT IS NOT A REAL QUOTE. But it's basically what he said.

Fox, to its credit, is telling Trump to fuck off. An excerpt from its statement:

Capitulating to politicians’ ultimatums about a debate moderator violates all journalistic standards, as do threats, including the one leveled by Trump’s campaign manager Corey Lewandowski toward Megyn Kelly. In a call on Saturday with a Fox News executive, Lewandowski stated that Megyn had a ‘rough couple of days after that last debate’ and he ‘would hate to have her go through that again.’ Lewandowski was warned not to level any more threats, but he continued to do so. We can’t give in to terrorizations toward any of our employees.

Oh how surprising -- a Trump surrogate seems to be threatening Megyn Kelly. Really, no, stop the presses.

[contextly_sidebar id="QtWvge7QjvGNolMOZj92URlF1sijauV3"]This feud has been so goddamned stupid. Megyn Kelly asked a legitimate question in the August Fox News debate about what a fucking misogynistic pig Trump is (“You’ve called women you don’t like fat pigs, dogs, slobs, and disgusting animals…”), and Trump has been temper tantrum-ing ever since that she had the audacity to quote him verbatim, instead of choosing to Make America Great Again by giving him a million rimjobs.

[contextly_sidebar id="8nkDT8j9EK7xQk4xI9DI3c4r9g7mighs"]Recently, when Vanity Fair put Megyn on the cover and she told the magazine a story about how Trump used to send her creeper press clippings of herself, which he had helpfully autographed for her, he lashed out again about how totally unfuckable she is. Know who Trump thinks IS super-fuckable? His daughter Ivanka.

And now here we are. Grown-up Donald Trump is riling up his cousin-fucking horde of supporters by showing those lamestream liberal haters at the Fox News who's boss. Will he ultimately reverse course and show up like a little pussy? Who even knows.

Or will he stay out of the debate, finally giving Canadian Ted Cruz his chance to winned some of those coveted Trump fans to his side? Cruz sure seems to think so, as he has challenged Trump to his own private debate, no gross girls like Megyn Kelly allowed.

[contextly_sidebar id="chnsE5EoQ1XQINS3xeRQjaPIv6j8ni1D"]But it'll probably be fine for Trump. As he correctly explained this weekend, his followers are so sociopathic and dumb they'd follow him right into hell even if he murdered somebody in the middle of 5th Avenue. So ... well played Donald Trump, we guess?