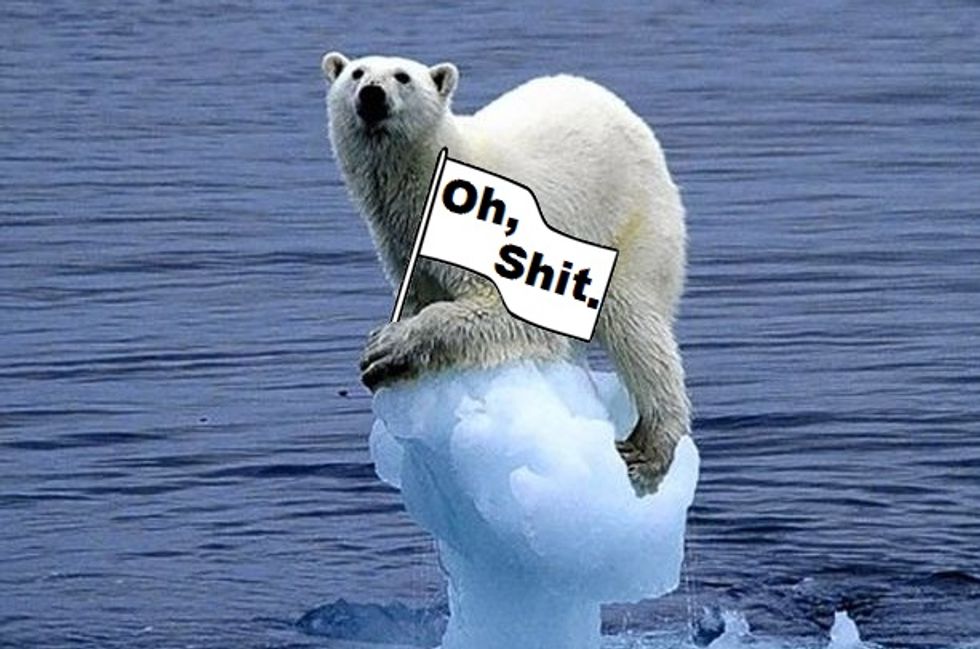 Do we really need an 'environment' anyway?

Donald Trump is reportedly all set to announce the USA's withdrawal from the 2015 Paris climate agreement, fulfilling a campaign promise to put science and the environment where they belong: well behind the interests of the fossil fuels industry because small increases in some corporate bottom lines are far more important than having a planet suitable for large mammals to live on. Mr Trump, informed he is himself a large mammal, objected that such claims were fake news.

The details of exactly how the president intends to tell the planet to fuck off are still being worked out, according to the New York Times:

A senior White House official cautioned that the specific language of the president’s expected announcement was still in flux Wednesday morning. The official said the withdrawal might be accompanied by legal caveats that will shape the impact of Mr. Trump’s decision.

And Mr. Trump has proved himself willing to shift direction up until the moment of a public announcement. He is set to meet Wednesday afternoon with Secretary of State Rex Tillerson, who has advocated that the United States remain a part of the Paris accords and could continue to lobby the president to change his mind.

Nonetheless, Trump announced on Twitter that he'd soon be making America great again, at least those parts that have no coastlines, agriculture, forests, migratory birds, animal habitats, or human populations:

In what seems like a serious case of whistling in the extreme heat caused by the concentration of greenhouse gases, made worse by the planet's disappearing albedo, The Times suggests it's still possible Trump may not take the nation into that good coal mining night. Citing Trump's previous reversals on his expected abandonment of NAFTA and his decision not to explicitly endorse Article 5 of the NATO treaty, the Times says hopefully, "Advisers pressing him to remain in the accord could still make their case to the boss. In the past, such appeals have worked." And that's true -- maybe we could get Chinese President Xi Jinping to explain what greenhouse gases are, how they trap heat in the atmosphere, and even point out that China is ahead of schedule in meeting its own goals under the Paris agreement. Haha, nah, this time there's oil and coal money involved. For his part, Xi has confirmed China will go ahead with its carbon reduction goals, just because the Chinese are sneaky like that, and because he and French President Emmanuel Macron agreed their two countries would have to take the lead in protecting the Paris agreement.

Despite Trump's campaign claims, he can't actually undo the entire Paris agreement; other signatories would still be committed to reducing their carbon output. And even with federal policies realigned to be more friendly to industry, clean and renewable energy has already become a significant, entrenched part of the energy market, and many state and local governments remain committed to reducing carbon output. We wouldn't discount the possibility that Trump supporters will take it upon themselves to begin dismantling wind turbines and solar power systems on their own.

Without American leadership on climate, of course, developing nations that love cheap dirty energy will have a fine excuse to follow America into the carbon sink:

“The actions of the United States are bound to have a ripple effect in other emerging economies that are just getting serious about climate change, such as India, the Philippines, Malaysia and Indonesia,” said Michael Oppenheimer, a professor of geosciences and international affairs at Princeton, and a member of the Intergovernmental Panel on Climate Change, a United Nations group that produces scientific reports designed to inform global policy makers.

Once the fallout settles, he added, “it is now far more likely that we will breach the danger limit of 3.6 degrees.” That is the average atmospheric temperature increase above which a future of extreme conditions is considered irrevocable.

The aim of the Paris agreement was to lower planet-warming emissions enough to avoid that threshold.

“We will see more extreme heat, damaging storms, coastal flooding and risks to food security,” Professor Oppenheimer said. “And that’s not the kind of world we want to live in.”

Oh, but just think of all the jobs we'll have, mining coal and building underground shelters! Not to mention all the jobs to be created in growing palm trees in Kansas and leading guided scuba tours of downtown Miami. But those things haven't happened yet, so they never will. America's going to be so great!

For what it's worth, recent polling shows majorities in all 50 states -- including coal states like West Virginia and Kentucky -- support staying in the Paris agreement. Majority opinion isn't persuasive to Trump, of course, since polls are all rigged, and the people who voted for him -- the only ones who matter -- all agree global warming is a hoax anyway.

Yr Wonkette is supported by reader donations. Please click the "Donate" linky and we'll keep yelling about real science. Also, please consider greening up your own energy use with a wind or solar power plan from our partners at Arcadia Energy.