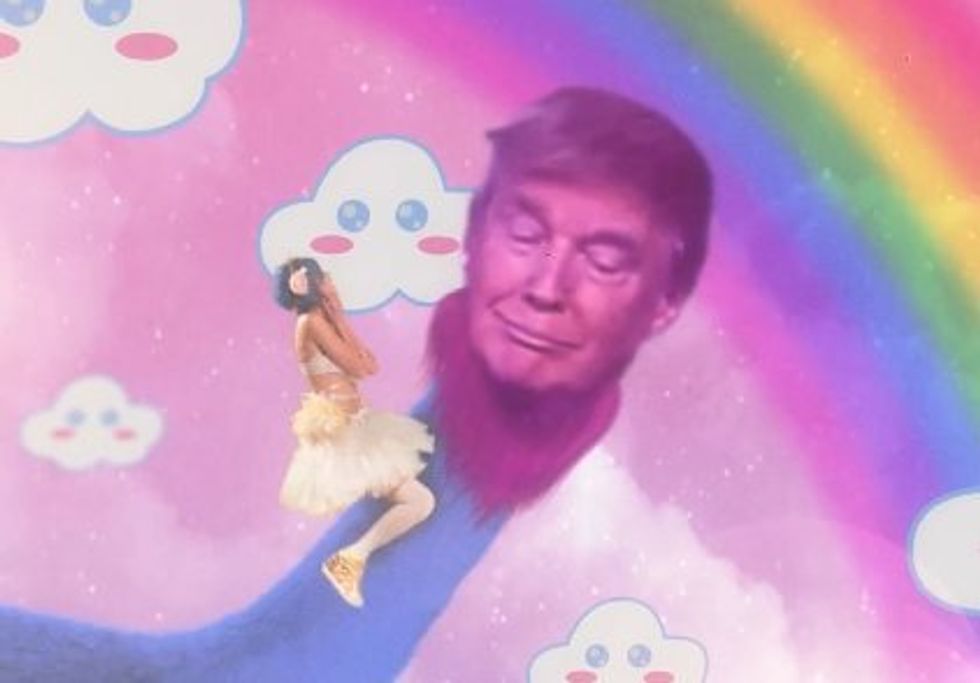 Some big news you might have missed out over the shop-til-you-shoot-someone vacation: President-elect Trump is far too busy to bother with "daily" intelligence briefings, having received only two between the election and Thanksgiving, according to the Washington Post, which says this frequency is "notably lower — at least so far — than that of his predecessors, current and former U.S. officials said." Yeah, but how about all the swamp he's drained? It would appear that, once again, Trump is Goofus, and somebody else is Gallant, in this case, Vice President-elect Mike Pence: While Trump's briefing team has been sitting around on standby waiting for the Haired One to get off Twitter, Pence has made time for intelligence briefings virtually every day since the election.

It's a good thing Mike Pence isn't a power-hungry jerk. At least we hope he isn't because if Donald Trump wins in November, Pence will run things while Trump golfs.

This only makes sense, since Pence is going to be the one who's really in charge of foreign and domestic policy, anyway. It also seems in keeping with Trump's well-known distrust of American intelligence agencies, which never seem to cover half the cool stuff you read about on InfoWars and AboveTopSecret.com. Hell, did the CIA have even word ONE to say about Hillary Clinton's sex-trafficking ring? Probably not, although we don't have a high enough security clearance or blood alcohol level to say for sure.

Still, not to worry! Team Trump assures us there's nothing to worry about in the president-elect's seeming lack of interest in even the special briefings the CIA has prepared for him using colorful charts and small words:

Officials involved in the Trump transition team cautioned against assigning any significance to the briefing schedule that the president-elect has set so far, noting that he has been immersed in the work of forming his administration, and has made filling key national security posts his top priority.

He's a very busy man. For one thing, he still wants Rudy Giuliani to fill virtually every cabinet position, but has the CIA even gotten back to him on his request for a quick-grown squad of Giuliani clones? Not at all, even though Trump saw on the internet they can churn those suckers out at phenomenal speed. You'd think the intelligence agencies would show a little more respect for a man whose candidacy was endorsed by the Pope. Despite the assurances that Trump will eventually start listening to the security briefers once he absolutely has to -- like when he needs a reminder whether it's Iraq or Iran we don't like, or which Korea is bad -- some unnamed enemies of America seem to think he should be paying attention already, before he's even picked out a suit for the inauguration or gone over the seating chart for the inaugural balls, if you can believe that:

A senior U.S. official who receives the same briefing delivered to President Obama each day said that devoting time to such sessions would help Trump get up to speed on world events.

“Trump has a lot of catching up to do,” the official said.

Yeah, well maybe some people think they have to study for exams, too. Besides, says Republican congresscritter Devin Nunes of California, a member of Trump's transition team and chair of the House Intelligence Committee, Trump's getting national security information all the time while he's putting his national security team together:

“National security is Donald Trump’s No. 1 priority and I think he’s taking it very seriously,” Nunes said in an interview. “Look how many leaders he’s met with, how many phone calls he’s done, positions he’s filled. People who are being critical need to get a life.”

Spoken like a true intelligence professional, and the chair of a body which once counted Michele Bachmann among its highly professional members.

Not surprisingly, the failing Washington Post, which no one takes seriously anymore, says Trump's predecessor in office was always eager to attend intelligence briefings:

After his election in 2008, President Obama took part not only in regular intelligence briefings but also scheduled “deep dives” on key subjects including Iran’s nuclear program and covert CIA operations, including the accelerating campaign of drone strikes in Pakistan.

“During the transition, President Obama was an avid consumer of intelligence,” said retired Lt. Gen. Michael V. Hayden, who was CIA director when Obama was elected.

God, the little suck-up probably took an apple with him for the briefers, too, and read stuff, even. Weak. Which is why you never saw Obama get to the really interesting stuff about how things really work in America, like with those millions of illegals voting. Bet the CIA doesn't even think that's real.

Security experts close to Yr. Wonkette inform us they are hopeful President Trump will begin to pay closer attention to the briefings after he's been in office a few weeks and the novelty of making his office chair go up and down begins to wear off.