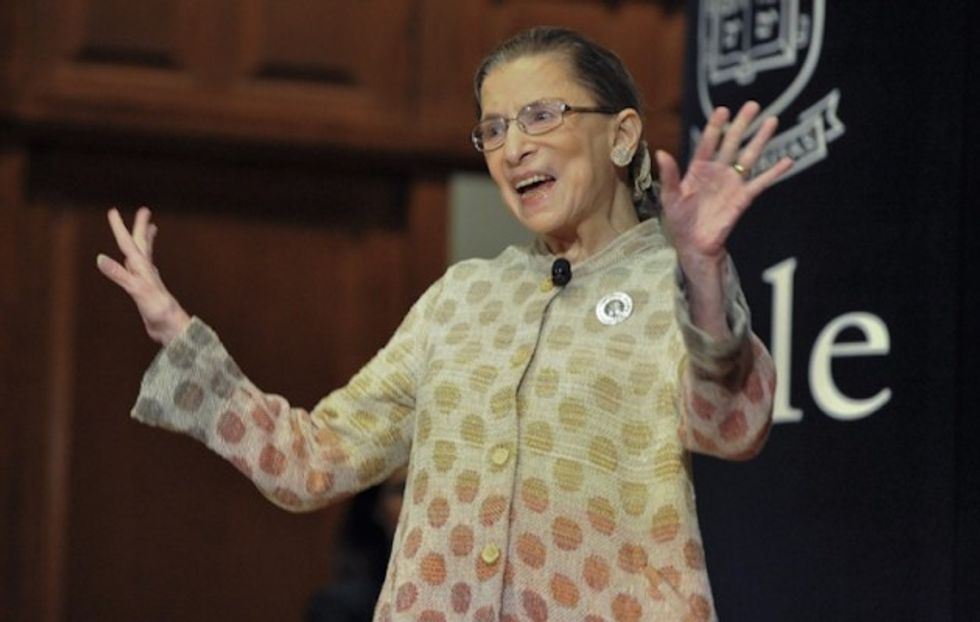 This is Ruth's 'Terrified of Donald Trump' pose.

Remember yesterday when we reported that the beautiful and talented Ruth Bader Ginsburg was not at all into the idea of President Trump, and would consider moving to New Zealand were this to occur?

WHELL, that hurt Donald Trump right in his feelings! So he told The New York Times that it was very inappropriate, and that she should leave the court and never come back!

“I think it’s highly inappropriate that a United States Supreme Court judge gets involved in a political campaign, frankly,” Mr. Trump said. “I think it’s a disgrace to the court and I think she should apologize to the court. I couldn’t believe it when I saw it.”

He continued: “That she should be saying that? It’s so beneath the court for her to be making statements like that. It only energizes my base even more. And I would hope that she would get off the court as soon as possible.”

HM. Maybe RBG should have gone with something more appropriate. Like suggesting that perhaps Donald Trump was a bimbo, or that he was bleeding out of his wherever, or that he maybe killed President John F. Kennedy, or say that it is gross that he goes to the bathroom sometimes, or that she expected him to have a really nice rack someday. You know, something more becoming of a United States official. Something a little classier.

Unless the rule is that Donald Trump can speak his mind and insult anyone he pleases in any way that he pleases, but no one is allowed to say bad stuff about him ever? That could be a thing! In fact, given how delicate he is about people insulting his hands, it probably is a thing. Maybe he is actually just bitter because if he got Ruth Bader Ginsburg nail art, like I had one time, no one would even be able to tell because he has such tiny hands that are definitely smaller than my hands?

Despite Donald's pleas for RBG to not say mean stuff about him, she is not backing down. She continued slamming him in an interview with CNN today:

"He is a faker," she said of the presumptive Republican presidential nominee, going point by point, as if presenting a legal brief. "He has no consistency about him. He says whatever comes into his head at the moment. He really has an ego. ... How has he gotten away with not turning over his tax returns? The press seems to be very gentle with him on that."

And that is why Ruth Bader Ginsburg actually cannot move to New Zealand in the event of a Trump presidency, as we need her to protect us.