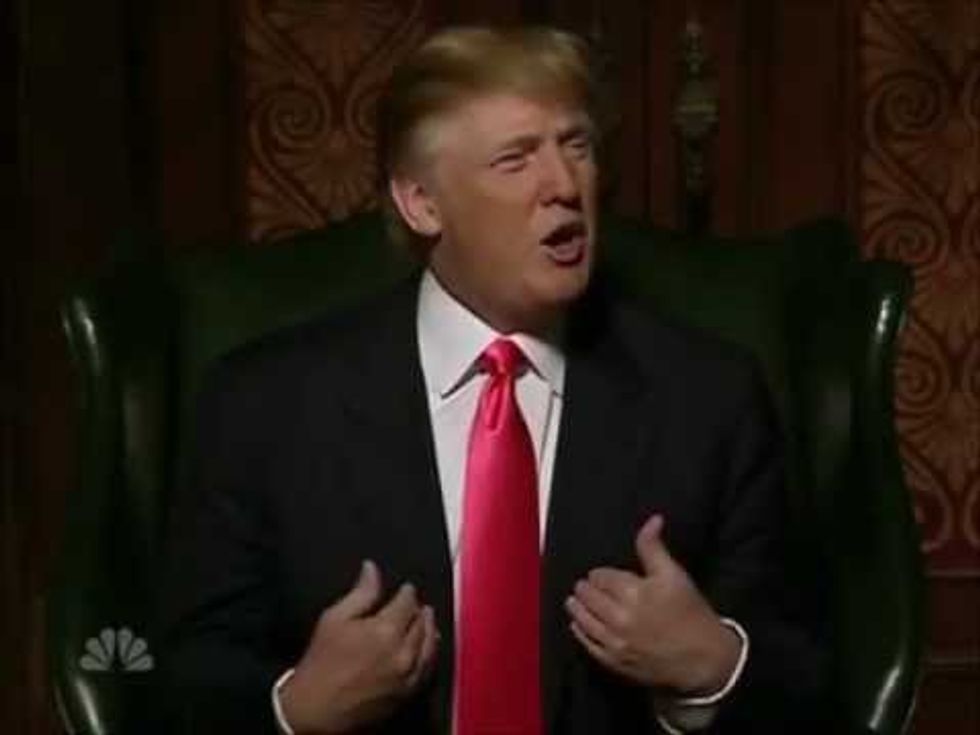 IT'S HIS HOBBY SHUT UP.

Donald Trump's coming presidency is shaping up to be like a seven-year-old boy's vision of what HE would do if he was president. He will be a spaceman and a cowboy and the president, and also he will be Hitler, because the seven-year-old boy in this story needs some serious therapy. And! He will still be in the reality TV business, because the New York Times is reporting that, in 2017, NBC is running a new season of "The New Celebrity Apprentice," hosted by Arnold Schwarzenegger, and President Trump will still be listed as an executive producer! How will he have time to fit that in between playing on Twitter and going to an intelligence briefing once a week while Mike Pence runs the country? HAHA DUNNO, HE'S MAGIC.

MGM, Mr. Burnett’s studio, declined to comment on what the president­-elect would be paid for his participation in the new season ... But in the past, Mr. Trump has held as much as a 50 percent stake in “The Apprentice,” and received payments from the show’s international editions and a short­lived version that starred Martha Stewart.

“Mr. Trump has a big stake in the show and conceived of it with Mark Burnett,” Hope Hicks, the president­elect’s spokeswoman, said on Thursday. Ms. Hicks confirmed that she was referring to a financial stake.

At what point will Hope Hicks wake up and decide she's tired of lying and making excuses for FuckFace? She's a young woman, she COULD actually have a respectable career and save herself from going to hell when she dies. But we are digressing.

[wonkbar]<a href="http://wonkette.com/608930/donald-trump-will-totally-abandon-his-business-empire-ayup-you-betcha-sounds-legit-to-us"></a>[/wonkbar]This reality TV news comes on top of all the other hilarious "I DO WHAT I WANT, YOU'RE NOT MY REAL DAD, MY REAL DAD'S A DEAD RACIST!" things we've been learning lately about Trump's various financial interests and what he plans to do with them. He's still holding that big press conference next week to tell us about how he's "separating" himself from his beautiful, gold-plated businesses (but not necessarily actually divesting himself of all his financial interests) and just giving them to the "Twilight" extras he calls his oldest sons. (Or whatever he has to do to give the "appearance" that he's separating himself. He actually said it was about the visuals, not the substance.) We're now hearing that Ivanka Trump, our new first lady, may ALSO be moving to Washington with her sexxx husband Jared and "separating" from the Trump Organization, and also her own Ivanka brands, which sell scarves or lighter fluid or something, honestly we don't care.

The Wall Street Journal has a fascinating look this week into the complex web of Trump's financial holdings and interests, how he owns an LLC that owns an LLC that owns a holding company that owns a skyscraper or an airplane or what-have-you, and the feeling we get is that for Trump to actually fully divest himself from all his various interests would be a bundle o' tasks bigger than his tiny hands have ever been asked to hold. Then again, so is the presidency.

Josh Marshall ties some of this together in a theory, of why Trump might be staying on to get a paycheck from "The New Celebrity Apprentice," why he might have allegedly sold all his stock in June, and why maybe, just maybe, this all points to how Trump actually can't, from a financial perspective, fully divest, because maybe he actually needs the money! Remember how Trump's always been sensitive about people saying he's not as rich as he says he is? Maybe it's because, both on paper and in his actual checking account at First Dubai Trust, he really isn't:

... [P]lausibly, and consistent with Trump's history over the last couple decades, Trump's business is dependent on an ever expanding number of deals not just to grow but to stay afloat at all. It is certainly plausible that if Trump simply sold off his company in toto, he'd be in debt. Maybe there wouldn't be anything left to put in a blind trust.

This is all necessarily speculative because Trump has kept the details of his business empire hidden from the public. But behavior, circumstantial evidence and lots of evidence of tight reliance on cash flow to service debts of various sorts suggest that Trump may not be able to divest or separate himself from his business. Why doesn't he? Why does he court all this controversy? Because he can't.

HMMMM WOULD BE INTERESTING TO SEE THE TAX RETURNS, YOU THINK?

If Marshall is right, then maybe Trump has to stay on the reality TV payroll (even if he's not actually working any hours for the program because he and his team are too busy trying to find the inter-dimensional portal to the secret Hillary Sex Ring basement at Comet Ping Pong), because how else is he going to buy orange spray tan sauce to keep his face looking pretty? Maybe if he actually sells off his business, he won't be able to buy the exotic wombat doo-doo pomade that gives his hair That Special Something.

Or maybe we are wrong about all this, and should just listen to Kellyanne Conway (PFFFFT FUCK THAT), who says doing reality TV is just Trump's "hobby," just like President Obama likes to play golf, and why shouldn't Trump get to do hobbies like all the other presidents, UNFAIR, DOUBLE STANDARD! Fuck off, Conway.

We don't know, we are just asking questions, and we are pointing out, yet again, that THIS SHIT IS NOT NORMAL.