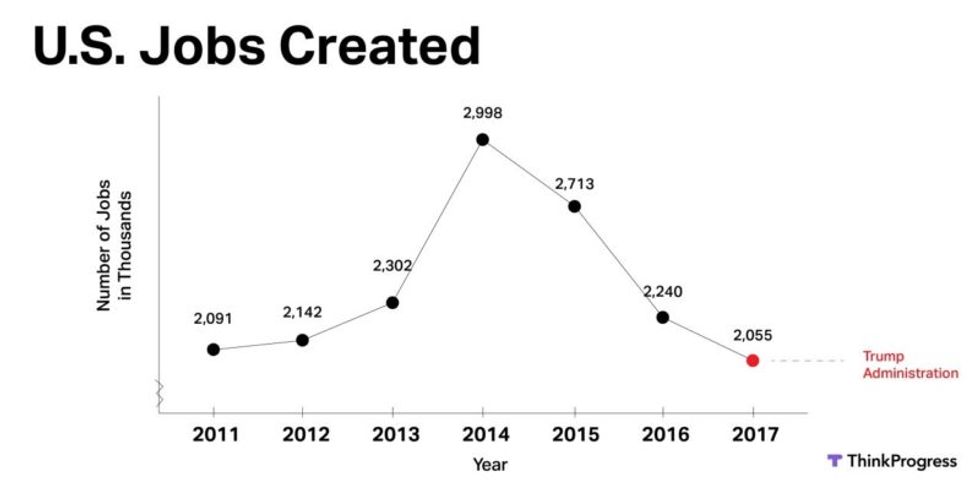 The stock market is up! Shut up about jobs!

Hi, Donald Trump! Just thought we'd show you a chart that illustrates the explosive job growth during your term. It's incredible -- turns out in your first year in office, you've presided over the lowest number of new jobs since 2011. Yes, yes, jobs are indeed still growing, but the rate of that growth has slowed considerably since the Obama years -- SAD! But wait! That chart was put together by the notorious liberal site ThinkProgress, so it must be lies -- where did they get their numbers? Oh. The federal Bureau of Labor Statistics? But that can't possibly be true, since as Donald Trump keeps tweeting, more and more Americans have jobs now, don't they? Yes. Even if the number of new jobs is slacking off, the total does keep increasing. But that also means that the recovery from the Great Recession is starting to cool, as we get closer to what counts (statistically) as full-ish employment.

Still, that chart has to be full of lies, since it appears to show jobs growing faster under Barack Obama than under Donald Trump, which is UNPOSSIBLE. Let's see how a more reliable news source reports that BLS information, with an average of monthly job growth instead of annual totals:

Hmmm. Now that's a lot better, since it shows how crappy the job growth was in 2010, when we were just starting to claw our way out of the recession. And now... oh, crap, the current monthly numbers are still the lowest rate of job growth since 2011. Let's see how that sucker looks as a graph, Dominic!

Oh. It's the same data trend, only with months. And that spike from 2010 to 2011 makes Obama's growth look even more vigorous! Dammit.

You just keep talking up the stock market, Donnie! It's doing GREAT!

And all of you kids can have a nice nerdy talk about infographics -- or about anything else, since now it's your OPEN THREAD!