Donald Trump Unpopular At Beauty Pageant Not Owned By Him 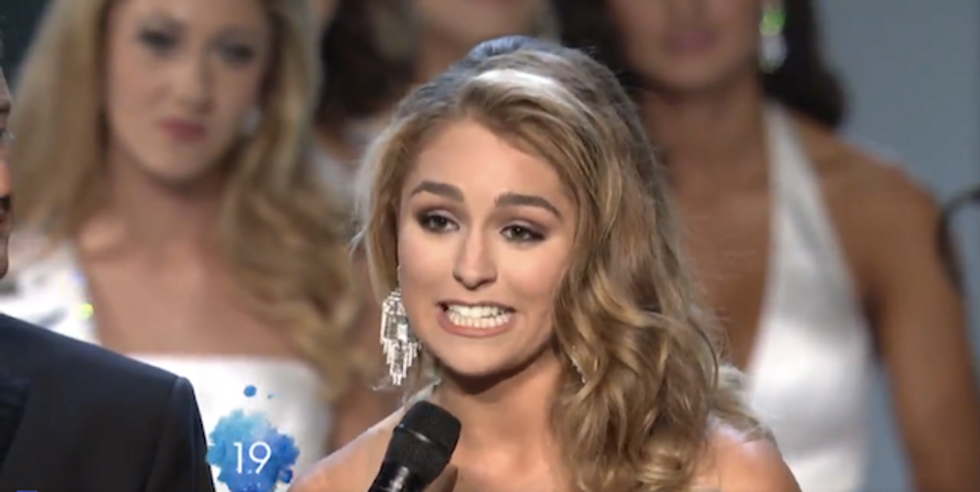 Last night was the Miss America Pageant. I did not know that in advance, because who even watches pageants anymore? Unless it's a Toddlers and Tiaras rerun or something. Is there still baton twirling involved? No one knows! It is a mystery!

These days, they're trying to make it less of a gross unfeministy thing (so we don't have to go there and burn our bras or anything, which is very nice of them because bras are EXPENSIVE), so they are now giving the contestants serious political questions. This occurs several days after the swimsuit contest.

So, you know -- not quite there yet, but close.

Trump reportedly used his power to leer at women of legal age at the Miss USA pageant too.

During the question and answer segment, several of the contestants were asked questions directly pertaining to former Miss USA beauty pageant owner Donald Trump, and what a terrible president he is. Their answers -- far from the "World peace is like, really good and stuff" answers of yore -- are likely to make Trump even more mad than the fact that being President does not allow him to walk around their dressing rooms while they changing.

Getting the most attention this morning is the response from Miss Texas, Margana Wood, to a question about the events in Charlottesville:

Question 2, from judge Jess Cagle: “Last month, a demonstration of neo-Nazis, white supremacists and the KKK in Charlottesville, Va., turned violent and a counterprotester was killed. The president said there was shared blame with ‘very fine people’ on both sides. Were there? Tell me yes or no, and explain.”

Miss Texas, Margana Wood: “I think that the white supremacist issue, it was very obvious that it was a terrorist attack. And I think that President Donald Trump should have made a statement earlier addressing the fact, and making sure all American feel safe in this country, that is the No. 1 issue right now.”

Miss Texas was not fucking around. She only had 20 seconds to answer that question, and threw down just about as hard as anyone could in that amount of time. She certainly did better than Donald Trump did.

Take a moment and appreciate the fact, though, that we now live in a country where calling out white supremacists is A) impressive and ballsy, and B) a thing Miss Texas is better at than the President of the United States.

The eventual winner of Miss America, Miss North Dakota Cara Mund, did not much care for Trump's decision to pull out of the Paris agreement. Because she, unlike Donald Trump, understands that climate change exists:

Question 3, from judge Maria Menounos: “One hundred ninety-five countries signed the Paris agreement, in which each country sets nonbinding goals to reduce man-made climate change. The U.S. is withdrawing from the agreement, citing negligible environmental effects and negative economic impact. Good decision? Bad decision? Which is it and why?”

Miss North Dakota, Cara Mund: “I do believe it’s a bad decision. Once we reject that, we take ourselves out of the negotiation table. And that’s something that we really need to keep in mind. There is evidence that climate change is existing, so whether you believe it or not, we need to be at that table. And I think it’s just a bad decision on behalf of the United States.”

Is there some way that we can make the position of Miss America more official in some capacity? Because I am 100% here for President Miss America and Vice President Miss Texas, both of whom are vastly more qualified to lead our country than Donald Trump or anyone in his administration.