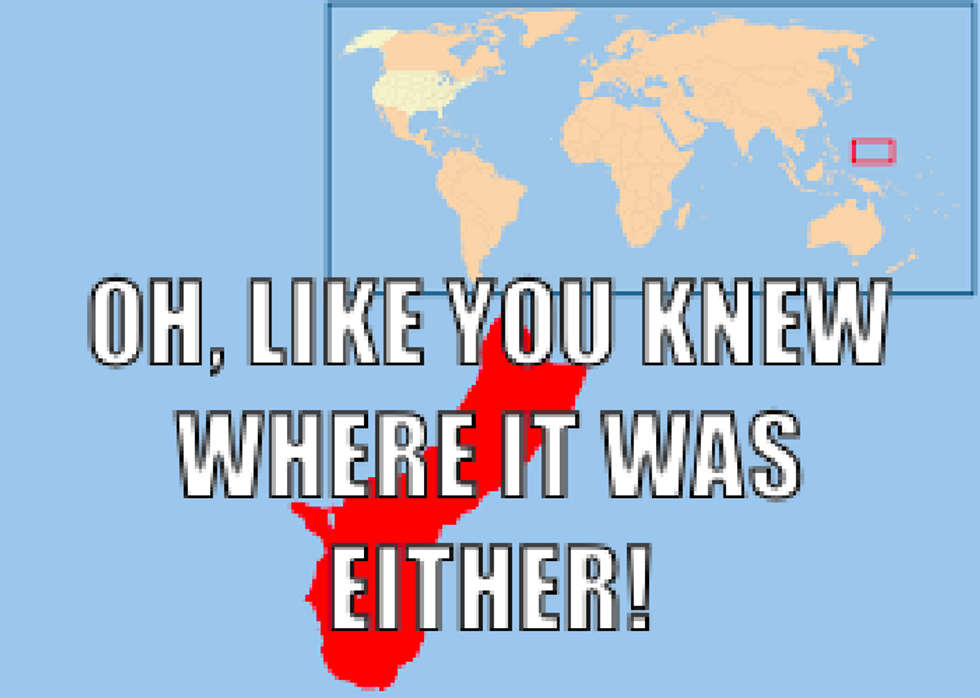 Eddie, I have to tell you, you’ve become extremely famous. All over the world, they’re talking about Guam, and they’re talking about you, and I think — tourism, I can say this, your tourism, you’re going to go up like tenfold with the expenditure of no money, so I congratulate you. … It just looks like a beautiful place.

Yes, because nothing says romantic getaway like a tiny island in the middle of the Pacific that just happens to have North Korean missiles trained on it!

“They should have had me eight years ago, or at least somebody with my thought process,” Trump said.

The official White House readout of the call left out all the batshit crazy stuff.

President Donald J. Trump spoke yesterday with Guam Governor Eddie Calvo. President Trump reassured Governor Calvo and our fellow Americans on Guam that United States forces stand ready to ensure the safety and security of the people of Guam, along with the rest of America. White House Chief of Staff John Kelly spoke separately to Governor Calvo earlier in the day.

Luckily Eddie Calvo posted a video of the whole bonkers call to his own Facebook page.

Mr. President, as the governor of Guam, representing the people of Guam, and as an American citizen, I have never felt more safe or so confident, with you at the helm. So with all the criticism going on over there, from a guy that’s being targeted, we need a president like you, so I’m just so thankful, and I’m glad you’re holding the helm, sir.

Thanks, Eddie! We're going to assume that you're trying to mollify the crazy orange man with his finger on the button rather than speaking for your actual constituents.

Americans discovered Guam this week after President Wingin' It ad libbed some nonsense about raining fire and fury down on North Korea if Kim Jong Un doesn't stop making threats against the United States.

North Korea hit back by announcing their plan to drop bombs in the waters surrounding Guam. Per The Guardian,

The general outlined a plan to carry out a demonstration launch of four intermediate-range missiles that would fly over Japan and then land in the sea around Guam, “enveloping” the island.

“The Hwasong-12 rockets to be launched by the KPA [Korean People’s Army] will cross the sky above Shimani, Hiroshima and Koichi prefectures of Japan,” the statement said. “They will fly for 3,356.7 km for 1,065 seconds and hit the waters 30 to 40km away from Guam.”

To which Donald Trump responded, "What the hell do we care if they bomb Guam?" PROBABLY.

It's a common mistake.

Does anyone believe Donald Trump could find Guam on a map? Most of us would just point somewhere west of Hawaii, right? Although most of us aren't provoking a controversy with a nuclear armed pariah state who could kill all 163,000 American citizens of Guam and 7,000 troops stationed at Anderson Air Force Base there, so there's that.

Where's America on this map? Well, it didn't fit, because Guam is 4,000 miles WEST of Hawaii and 5,000 miles from California.

But please, tell us more about how Americans will be whipping out their credit cards to buy tickets for the 12 hour flight from California to Guam! The Japanese will be so pleased to have those Korean missiles whizzing over their heads, they'll book a vacation out of sheer gratitude!

Guam being only 210 square miles, this map is NOT TO SCALE.

In fact, Guam is only 2,400 miles from Pyongyang in North Korea. If it weren't for the sanctions of the American war dogs, Kim Jong Un would be sunbathing in his Speedo on the beautiful beach at Tumon right now. Sexxxxy!

Okay, probably not. But if we had a real North Korea policy, Kim Jong Un might have stuck to threatening DC, which he can't hit. Now he's threatening to bomb the waters off Guam, and he definitely does have the range to shoot rockets there. Although North Korean missiles are notoriously inaccurate, so there's a real chance North Korea could hit Guam by accident. Ooopsie!

For the record, we are highly skeptical that North Korea will drop a bomb anywhere near Guam. BUT ... we are now relying on Possible Lunatic Kim Jong Un to think strategically, because we know that Definite Lunatic Donald Trump can't do it.

Which probably means he'll tweet out orders to bomb North Korea next week after Bannon whispers some shit in his ear about Lil' Kim making fun of his tiny hands. Hooray!!!

And that's one to grow on! Now show us some love!