Donald Trump Wonders Why He'd Want To 'Get Out The Vote.' Is That Even A Thing? 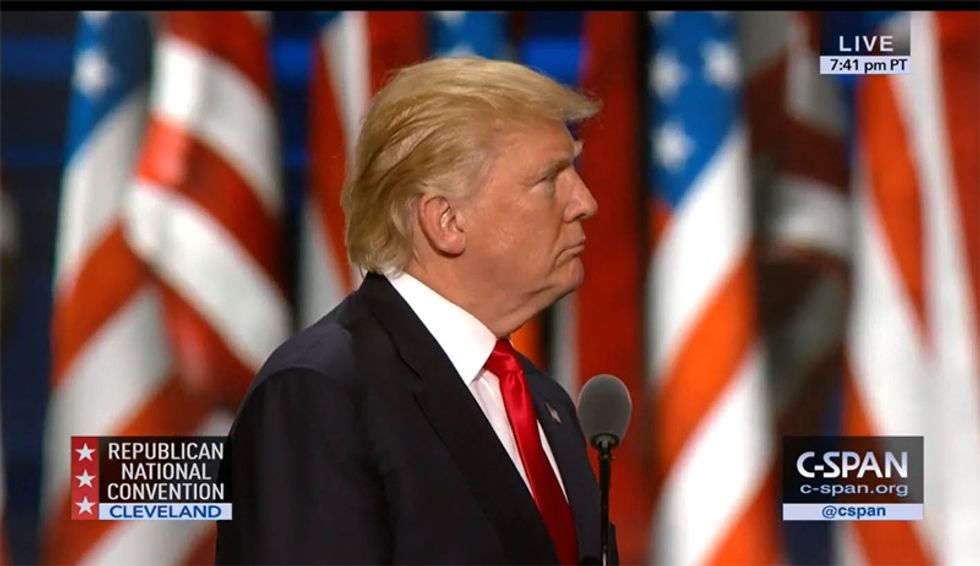 Really? That's something people do? That's not what I hear.

Donald Trump sure is a mavericky maverick, all right. He doesn't bother with all sorts of conventional wisdom stuff, from the idea that a presidential campaign should buy TV ads -- he hasn't -- to the old-fashioned notion that you shouldn't call for your opponent to be assassinated. He doesn't need a bunch of dumb campaign offices in "every state" or even "Florida," and he sure as hell doesn't need to "prepare" for debates. If he even bothers showing up. So it shouldn't be any surprise Trump questions the wisdom of "Get out the vote" efforts, too. In an interview on Fox's "The O'Reilly Factor" Thursday, Trump told guest host Eric Bolling he wasn't worried by the possibility the GOP might withdraw its support from him. No biggie, he said (relevant section starts around 7:50 in):

If anything, the RNC better hope Trump doesn't withdraw his support from them, because he's raising all their money right now and they better hope he doesn't wish them into the cornfield for being mean to him. Bolling pointed out that the official party has all sorts of neat campaign infrastructure and resources that might be useful to Trump, like email lists, phone numbers of registered white voters, and lots of photos of Ronald Reagan, not to mention snazzy elephant fur suits to attract the furry vote. Isn't Trump worried about getting people out to vote for him?

I don’t know. I will let you know on the ninth, on November ninth, meaning the eighth is your election and the ninth is when we find out...I think we're gonna have tremendous voter turnout.

Yr Wonkette is actually fairly certain we'll know the night of the eighth, really. Like early. Not to be complacent or anything. Still, huge voter turnout, no need to worry about resources:

We're going to have tremendous turnout from the evangelicals, from the miners, from the people that make our steel, from people that are getting killed by trade deals, from unemployed people that have been just decimated, from the military who are with Trump 100 percent, from our vets, because I'm gonna take care of the vets [...]

[strange chime noise is on the video, not your computer. Do not panic -- Dok Z]

Seriously, why is everyone acting like Trump has no idea what he's doing? The American people love him, and unlike other campaigns, he won't have to worry about people showing up to vote. He might just take the last four weeks of the campaign off and go check out his golf courses in Scotland, that's how well he's going to do.