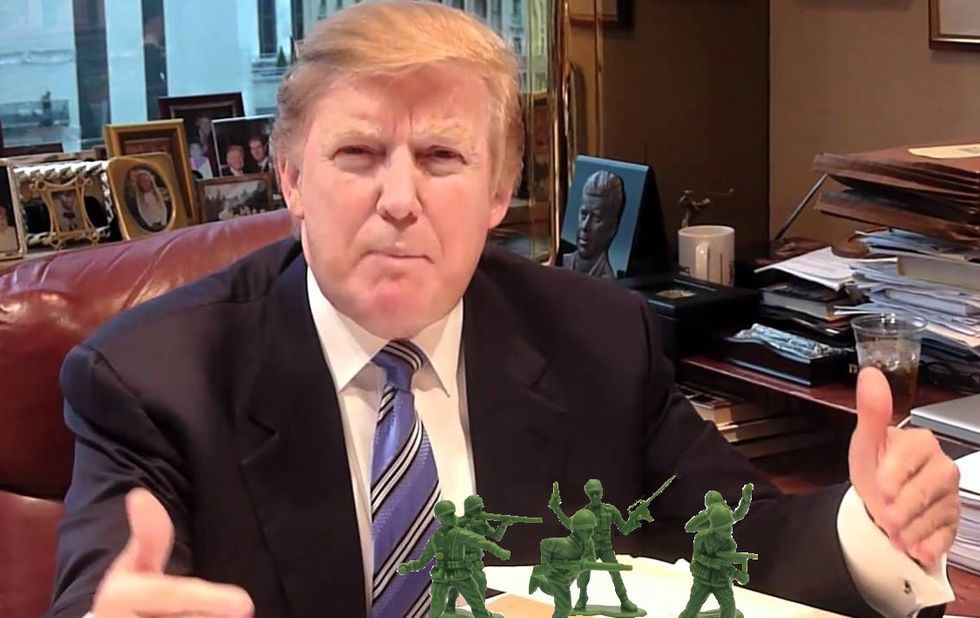 You know what the problem is with this whole Edward Snowden/NSA leaks thing? Not nearly enough action! Donald Trump has a solution, though! We need some executions, just like we needed in the Central Park Five case! On Monday's Fox & Friends (or as RawStory calls it, the "Republican morning talk show “Fox & Friends”), Trump bemoaned how "weak" U.S. America has become, as demonstrated by the fact that Edward Snowden is still drawing breath:

“You know, spies in the old days used to be executed,” Trump said. “This guy is becoming a hero in some circles. Now, I will say, with the passage of time, even people that were sort of liking him and were trying to go on his side are maybe dropping out… We have to get him back and we have to get him back fast. It could take months or it could take years, and that would be pathetic.”

You know, like how we shot Daniel Ellsberg at dawn, right?

Trump went on, because going on and on is what Donald Trump does:

“This guy’s a bad guy and, you know, there’s still a thing called execution,” he went on. “You really have to take a strong… You have thousands of people with access to material like this. We’re not gong to have a country any longer.”

Trump did not explain just how exactly leaking some details of a domestic surveillance program threatens the existence of the entire nation, or even how our international standing would be improved by sending an assassination or kidnapping team to attack the International Stateless Hero/Traitor Lounge at the Moscow airport. His train of thought was instead derailed by Archdouche Brian Kilmeade, who noted that instead of focusing on one single thing (Benghazi), President Obama was giving a speech Tuesday on global warming, which is not even a real thing. This did, however, give Donald Trump a chance to disprove global warming because of something he thinks he knows:

“You know, in the 1920s, magazine covers had a very scary phenomenon called global cooling,” he said. “The planet was severely cooling and everyone was worried about global cooling. Now it’s global warming. No, we have bigger problems. Believe me, we do.”

Global warming can't be a real problem, because there's nobody to execute, right?

As for Barack Obama, he is once again failing to take Donald Trump's advice, saying that since extraditing Snowden is a law enforcement matter, he "shouldn't have to" make a direct appeal to Vladimir Putin. In a disturbing display of non-freak-outedness, Obama also said "No, I am not going to be scrambling jets to get a 29-year-old hacker."

Come on, Barry, where's the panicky overreaction? Isn't that what makes America strong?