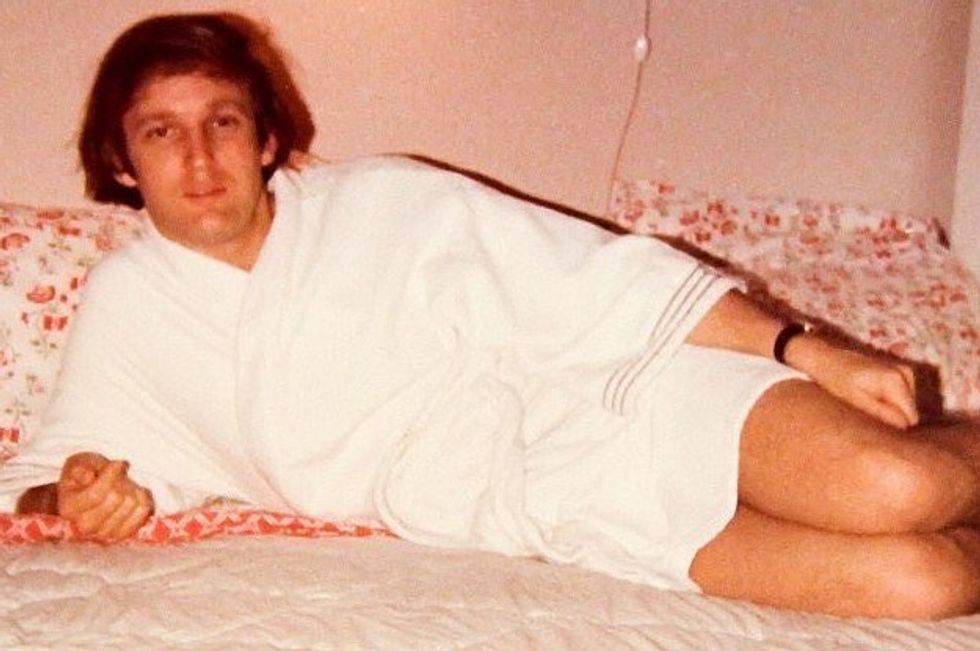 Time for your daily update on Donald Trump and his gross, wandering wiener! Since Stormy Daniels's "60 Minutes" interview, there's been a cease and desist letter, a new legal filing, leaks about Trump's reaction, and a non-denial denial at the White House daily press briefing. So glove up kids -- don't be like Donald Trump -- we're going in!

How dare you say Michael Cohen threatened you! Take that back or he'll ruin your life!

Sunday night, Daniels described being threatened in 2011 after telling "In Touch" magazine about that time in 2006 when she bumped bits with Donald Trump.

I was in a parking lot, going to a fitness class with my infant daughter. Taking, you know, the seats facing backwards in the backseat, diaper bag, you know, gettin' all the stuff out. And a guy walked up on me and said to me, "Leave Trump alone. Forget the story." And then he leaned around and looked at my daughter and said, "That's a beautiful little girl. It'd be a shame if something happened to her mom." And then he was gone.

Cohen's lawyer Brent Blakely immediately fired back with a letter demanding that Daniels apologize to Cohen and retract her "defamatory statements" alleging that he sent a "thug" to threaten her. Which is all well and good, except she never made any such allegation.

Later in the interview Daniels did claim that she signed the agreement because she believed Cohen would "make [her] life a living hell." But if Michael Cohen didn't want people to call him a bully, he shouldn't have called up so many reporters and said, "What I'm going to do to you is going to be fucking disgusting."

Want to know what Michael Cohen is capable of when working on Donald Trump's behalf? Read this article that details his thuggish tactics in detail. https://t.co/Zr2if2mAKV. His legally baseless claim that there is "no such thing as spousal rape" was also a nice touch. #basta

This reminds us of our favorite Politico story about Avenatti.

“It is very rare that I draw an opponent who is not at the very top of the legal profession,” he said. “I would prefer to litigate against high-quality lawyers as opposed to low-quality lawyers.”

Asked if Cohen is a low-quality lawyer, the line fell silent. Ten seconds ticked by. Fifteen.

Simmer down, pervs! We mean the Amended Complaint he filed yesterday adding a charge of defamation against Michael Cohen personally. (Or do we?) On February 13, 2018, Cohen explained how he came to pay Daniels to keep quiet about an affair that he claims never happened.

Just because something isn’t true doesn’t mean that it can’t cause you harm or damage. I will always protect Mr. Trump.

Was Cohen defaming Daniels, or was he voiding the NDA by talking about it? Well, if you believe Avenatti, it was both!

The complaint also adds some interesting new grounds to void the contract, including that adultery was illegal in Trump's home state of New York in 2006, and you can't enforce a contract to cover up evidence of a crime. We believe the legal term for this is epic fucking trolling. We all know that Trump and Daniels knocked boots in California, where adultery was legal. But is Trump's lawyer really going to get up in court and say, "Your Honor, my client never had sexual relations with this woman. Also, they only did it in California!" LOL, go for it!

"False charges are settled out of court all the time. This is nothing outside the ordinary," Deputy Press Secretary Raj Shah says of Stormy Daniels settlement. https://t.co/99h54FWzgy pic.twitter.com/AcPRgTI9af

False charges are settled out of court all the time. This is nothing out of the ordinary. You have to ask Michael Cohen about the specifics.

Wonder how long it will take Avenatti to sue for defamation and claim that the president has voided the agreement by talking about it? Probably not too long!

According to the Washington Post, Donald Trump has been wandering around Mar-a-Lago asking random rich people if they believe Daniels's story.

But privately, the president has lobbed sharp attacks at Daniels and her media tour, calling her allegations a "hoax" and asking confidants if the episode is hurting his poll numbers. The president even has griped to several people that Daniels is not the type of woman he finds attractive.

Whatever, dude. Save it for the deposition! Also, you better hope there's really nothing on this disc.

If “a picture is worth a thousand words,” how many words is this worth?????#60minutes #pleasedenyit #basta pic.twitter.com/eCkU0JBZaR

Looks like we're gonna run out of popcorn before we even get to hear a description of the president's nasty orange junk. Which is probably just as well, because ... HUUUUUUURL!

Please click here to fund us, or else the dick pics win!