Donald Trump's Finnish Press Conference Could Have Been Worse. And Then It Was! 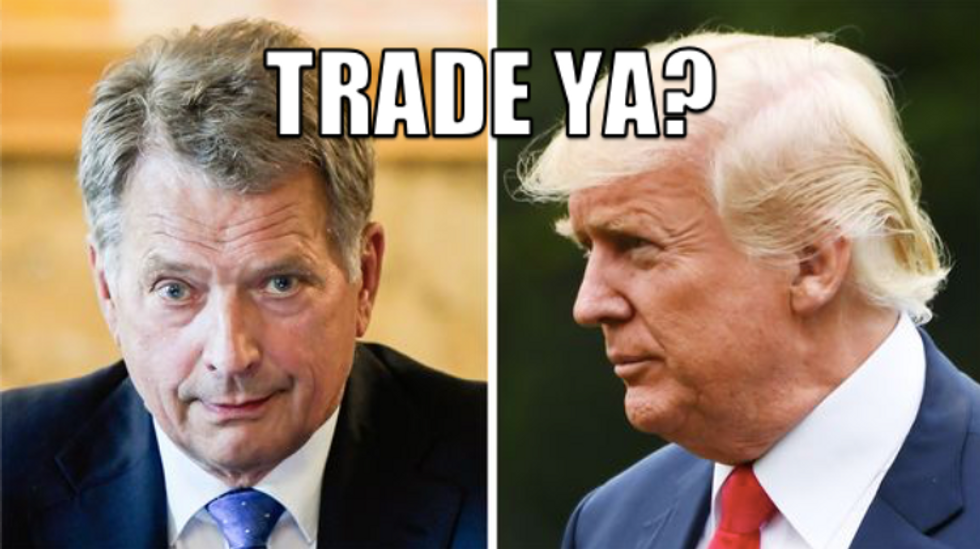 Yesterday, our Presiderp held a joint press conference with Finnish President Sauli Niinistö. Finnish culture places a high premium on gravitas and abhors bragging. So Donald Trump welcomed his guest by blathering for 20 minutes about Joe Arpaio's patriotic service to his country and bragging about the size of the crowds at his campaign rally.

Was it humiliating? IT WAS!

Donald Trump just about made it through his prepared remarks without shaming the country. Everything was FANTASTIC!

From the hurricane clean-up --

We're working directly with Texas Governor Greg Abbott who by the way is doing a fantastic job.

To Finnish cybersecurity -- although we're catching up! --

You do do a fantastic job with cybersecurity and I congratulate you. And, uh, I think in a very short period of time we're going to be right there with you, believe me.

On behalf of all Americans I congratulate you and the Finnish people on the 100th anniversary of Finland's independence. One hundred years! It's fantastic!

John Roberts: In the middle of Hurricane Harvey hitting on Friday night, you chose to pardon Sheriff Joe Arpaio. I wonder if you could tell us what was behind your thinking for issuing a pardon for the sheriff. And as well, what do you say to your critics, even some in your own party, who say it was the wrong thing to do?

Trump: Well, a lot of people think it was the right thing to do, Jim. And actually, in the middle of a hurricane, even though it was a Friday evening, I assumed the ratings would be far higher than they would be normally.

He had to do it Friday! DUH! It was sweeps week!

Trump on pardoning Arpaio during Harvey: "I assumed the ratings would be far higher than they would be normally." https://t.co/4tMNoDKN4E

(In case you were holding out hope that this little nugget was lost in translation, forget it. President Niinistö speaks better English than you do.)

Then Trump whipped out a list of people pardoned by Obama and Bill Clinton. Because Marc Rich got off in 2001, so Trump is entitled to his own corrupt pardon. It's just basic math, people!

Putin definitely has those pee tapes! There is no other explanation!

Finnish Reporter: Mr. Trump, would you consider Russia as a security threat?

Trump: Well, I consider many countries as a security threat, unfortunately when you look at what's going on in the world today.

We're going to go out on a limb and guess that Donald Trump knows nolla about Finno-Russian relations. Does he get that we're hauling our ships up to the Baltic Sea for joint naval exercises with the Finns because of Russia?

As a follow-up, the nice Finnish reporter wondered if the US would defend Finland from a Russian attack.

Well, as I said before, our relationship with Finland is a very close one. And we're always ready to help Finland.

I think Finland's really a respected country militarily. It's got a large armed forces for its size as a country. Really, proportionally probably one of the biggest in the world, if you think of it. But they're very respected militarily. And they're respected beyond militarily. So, hopefully, it'll never come to that.

So, no. He got pee in his hair, and now the Finns are on their own. ALLEGEDLY.

We are very protective of that region. That's all I can say. We have very, very great friends there. We have great relationships there. We are extremely protective.

President Niinistö gripped the podium as his eyes bugged out. Which is probably how the Finns show that they approve and feel totally reassured.

And then Trump hit the 20 minute mark, so it descended into lunatic argle bargle. Within thirty seconds, he went from ranting about Americans drowning under a tide of Mexican drugs,

Tremendous drugs are pouring into the United States. At levels that nobody's ever seen before.

To bragging about how he and his chief of staff are seizing all the drugs at the border.

Poppy, what have we told you about dipping into the stash?

Niin monet blondit! So many blondes!

Then Trump accused President Niinistö of calling on the same reporter twice.

“Again?” said Trump, mistaking the woman for another female reporter who had asked a question earlier in the news conference. “You’re gonna give her — the same one?”

“No, she is not the same lady,” Niinistö replied. “They are sitting side by side.”

“We have a lot of blond women in Finland,” the reporter interjected.

THIS. The Finnish journalists @potus had trouble telling apart. They are def. 2 diff. people. So glad I met @maria_annala + @vilenpaula. pic.twitter.com/gthZWwiiJa

Mitään muuta? Anything else?

Well, The Dealmaker in Chief said he was going to pretend to cancel NAFTA as a bargaining chip. But it's cool, because he'll negotiate a better NAFTA, and all the jobs will come roaring back.

I've always said. I've talked about NAFTA, and you've heard me many times. And I've always said, we will either terminate it or renegotiate it. We're in the process of renegotiating right now, renegotiating the deal. I believe that you will at least have to start to the termination process before a fair deal can be arrived at. Because it's been a one-sided deal. And this includes Canada by the way -- great respect for Canada, great love for Canada. But it's been a one-sided deal for Canada and for Mexico. And the United States workers, all of these incredible people who have lost their jobs because of NAFTA, they're not going to be suffering any longer. It's been unfair for too long.

At which point, President Niinistö silently thanked Jesus that he's got Putin in his back yard, instead of The Orange Idiot.

We watched that whole, idiotic press briefing! If ever we deserved a tip, today's the day!