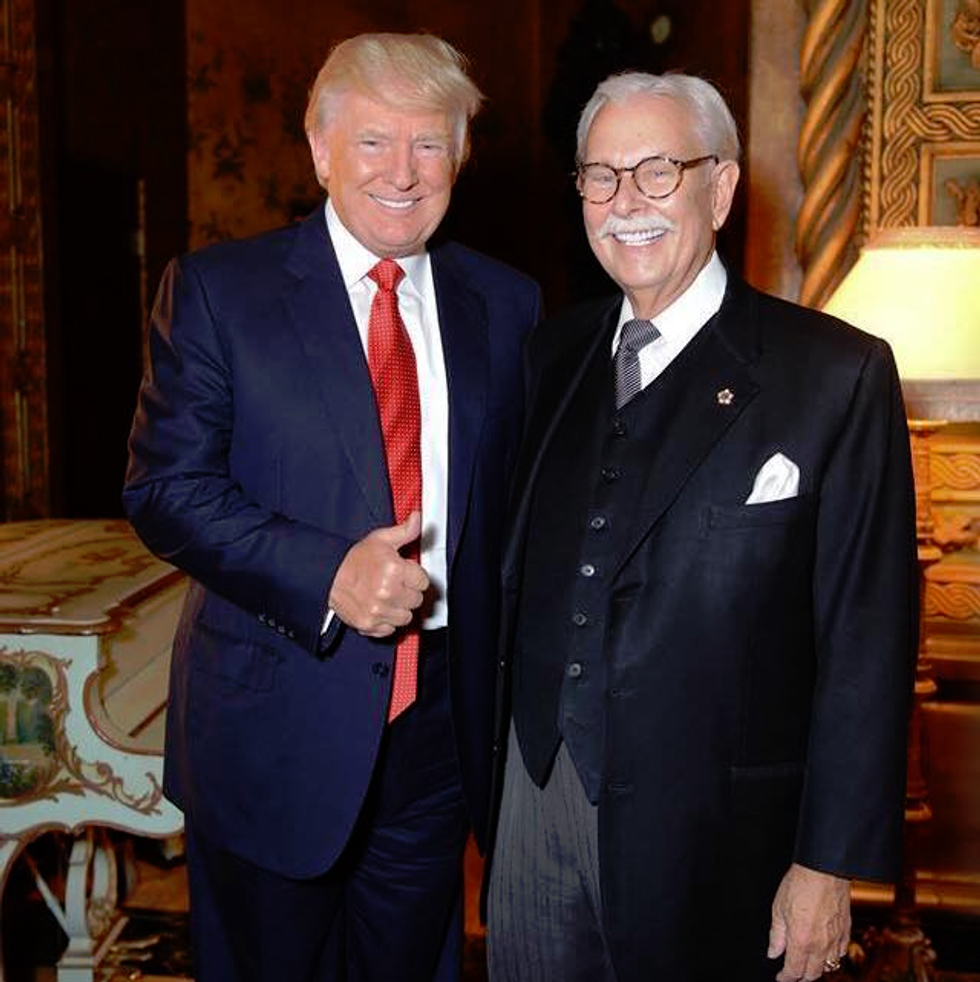 Stop the presses, everyone, because Mr. Donald J. Trump's faithful man-servant has been calling for the death of our fearless leader Barry-Bams, Hillary Clinton, and pretty much all "negroes."

Anthony Senecal was the Alfred to Trump's Bruce Wayne from the early 1990s until 2009. When Senecal attempted to spend his remaining years sipping Mai Tais and smoking cigars, Trump told him, "to retire is to expire," and kept him on as the unofficial historian to lead tours around Trump's luxury death-camp for retirees, Mar-A-Lago, because the 84-year-old wingnut had worked there since Eisenhower.

Now the living embodiment of the Monopoly guy, Senile Senecal -- GET IT? IT IS A SUPER COOL NICKNAME WE MADE, JUST LIKE TRUMP, or maybe Andrea Peyser :( -- regularly screams at the top of his Facebook lungs. Like so!

To all my friends on FB, just a short note to you on our pus headed "president" !!!! This character who I refer to as zero (0) should have been taken out by our military and shot as an enemy agent in his first term !!!!! Instead he still remains in office doing every thing he can to gut the America we all know and love !!!!! Now comes Donald J Trump to put an end to the corruption in government !!!!

Most of his recent posts have now been privatized (read: "CENSORED by liberal media!!!"), but there are still some choice posts that praise Anne Coulter, call for Hillary Clinton's death by murder, and call Obama a "filthy muzzie."

I don't know what a Muzzie is, but back in my day, Muzzy taught me to speak french.

Senile Senecal refuses to acknowledge Barry-Bamz as anything but "zero (0)", while his friends make all sorts of racist death threats that range from the First Lady, to George Soros and Hillary Clinton. And, yes, in case you were wondering, there's even enough N-bombs to put a tear in the eyes of David Duke. And yet, he is delicate to disemvowel himself when he calls Hillary Clinton a cunt!

Senile Senecal also knows all types of risque details about the presumptive Fuhrer in Chief. According to Senecal, Trump doesn't like jet noise, rarely appears in bathing trunks (because he doesn't like swimming), and Trump also likes to walk around and give the Hispanics -- whom he loves! -- hundred dollar bills as they trim the trees. He also loves it when Senecal tells him a 225-yard golf drive is 275 yards. Which might be part of the reason he thinks he has large hands.

It's beginning to seem as if The New York Times's profile of Senecal -- the greatest scoop in which was that Trump likes his steaks well-done -- might have somehow been incomplete.