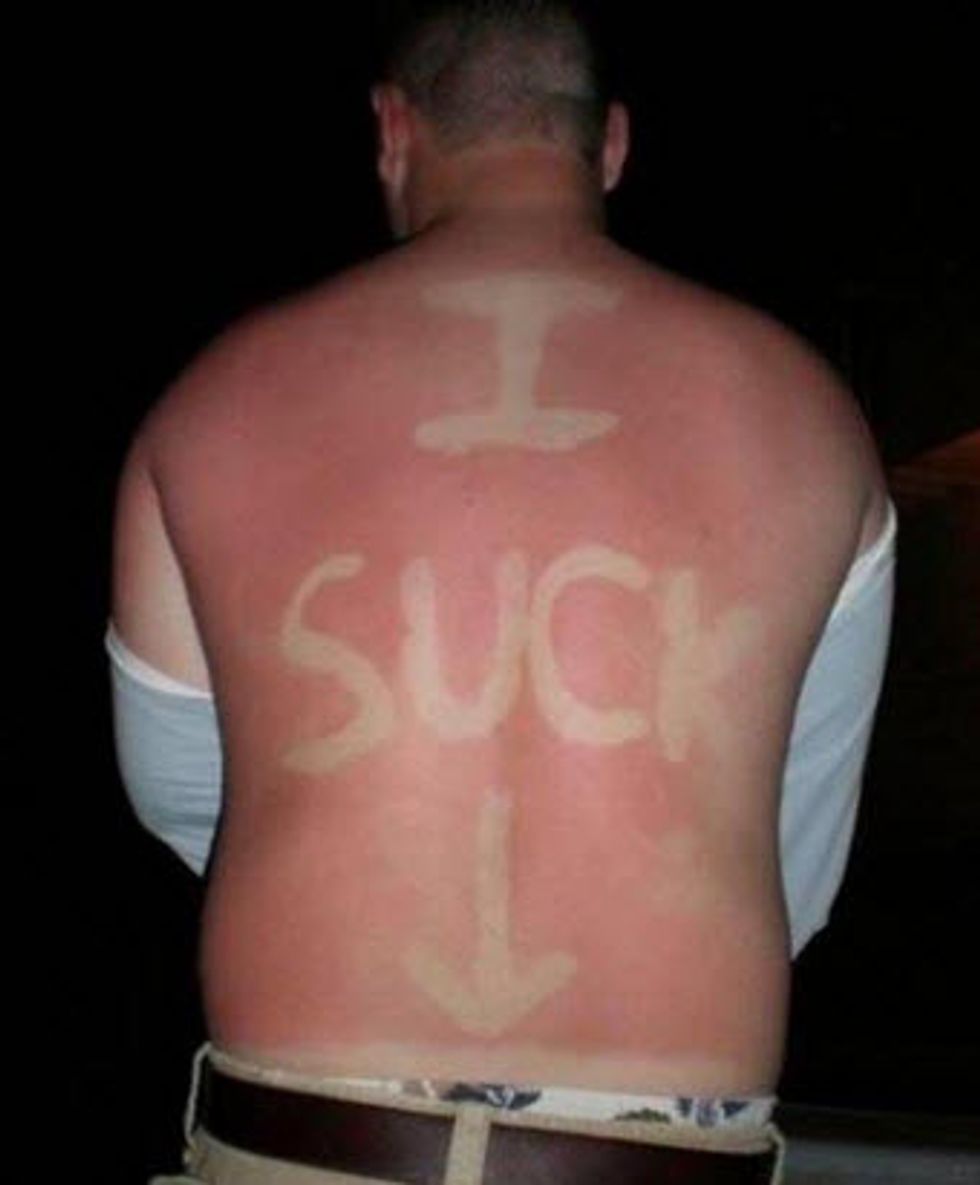 Salutations once more, dear readers! We here at your friendly neighborhood Snake Oil Bulletin took a short sabbatical to recollect our chakras and get the fuzz off our heels for a while (it's like a honest businessman can't even sell a magical miracle elixir no more without some busybody shoutin' "Fraud!" or "This smells like drain cleaner" or "Why does it have to be taken rectally?"). But now we're back, and we're rarin' to go with a heapin' helpin' of brand new tales of woo to satisfy any appetite. Let's waste no more time and get right to it!

Man who poisons babies pretty sure sunscreen is toxic

You know what we haven't had in some time? CELEBRITY NEWS! Today's Page 7 pinhead is a returning favorite, Pete Evans, an Australian paleo chef with a penchant for chronic foot-in-mouth disease, including claims that a paleo diet can fix autism.

The Snake Oil Bulletin: Can The Paleo Diet Cure Autism? Why No! No It Cannot!

This past week, Pete decided to host a Facebook Q&A, which is always a good idea for a man with no qualifications or knowledge or basic smart stuffs. Thank goodness he's handsome! When asked by a fan what sunscreen he uses to not die of horrible melanoma death in his native Australia, Pete decided to smash our sunscreen worshiping hegemony and dropped some dumb bombs.

After telling the first fan he didn't wear 'poisonous' chemical sunscreen, Evans launched in to a tirade against sun-seekers, according to The Sunday Telegraph. 'People put on normal sunscreen then lay out in the sun for hours on end and think they are safe because they have covered themselves in poisonous chemicals, which is a recipe for disaster as we are witnessing today,' he said.

Evans is quite the expert on poisonous chemicals after all, seeing as his gut-churning paleo baby food book Bubba Yum Yum was immediately canceled because it included a liver and bone broth recipe that would poison babies with a lethal amount of vitamin A. Nearly murdering a few million babies apparently wasn't enough to get Evans removed from teevee, so his media platform continues to this day.

After Evans made the poisonous sunscreen comments, Terry Slevin, director of education of Australia's Cancer Council immediately pointed out that he's a big Bubba Dum Dum:

Australia experiences some of the highest rates of skin cancer in the world and we have strong evidence sunscreen reduces the risk of cancer. It's surprising and disappointing that someone who has a public following would advise to the contrary. It's dangerous for the people who follow his advice...

My observation has been over 20 years is the loudest voices from people who make claims about the adverse effects are those who have a commercial interest in the other type of sunscreen.

And wouldn't you know it? In that very same Q&A, Evans told his fans that while he doesn't normally wear sunscreen because he keeps an all-year tan (spoiler: skin cancer doesn't care how bronze you are), he does use a zinc oxide product called Surf Mud, an unregulated jar of nonsense that claims to prevent burns with added woo nonsense.

Our search through Pete's website and affiliates did NOT turn up any financial connection Pete might have to the Surf Mud creators, which seems like a missed opportunity for Evans, frankly. The Food Babe is disappointed in your poor vertical integration, Pete. The game plan is that you invent a made-up malady (in this case, "toxins" in sunscreen), then after getting your slathering fans into a frothing rage, you present them with a "safe, all natural" alternative that doesn't actually work, and then just ban anybody who points out you're full of 100% grass-fed bullshit. How else are you going to score those sweet, sweet woo merchandising dollars if you don't make these network connections? Get on that, Pete. Your riches depend on it.

Republicans and anti-vaxxers starting to sleep over, braid each other's hair

Thanks to the efforts of the YOOGE Deal Maker himself, Republicans are increasingly comfortable denying basic medical science in addition to their previous denials of basic climate science, biology, geology, cosmology, physics, and probably some herpatology too. Make America Dumb Again!

A recent Daily Beast poll found that Republicans were much more likely than Democrats to forego their next vaccinations, and when asked which celebrities shared their opinion, they overwhelmingly named Trump as their man.

SUNY-Albany marketing professor Ioannis Kareklas and Washington State University Ph.D. candidate T.J. Weber analyzed the data. They found that 25 percent of respondents affiliated with the Republican Party said it was more likely they would not vaccinate themselves and their families than that they would. Meanwhile, 15 percent of respondents who identified with the Democratic Party gave the same answer.

And Trump’s supporters were substantially more likely to have a negative view of vaccines than Hillary Clinton’s. Of the respondents who said they would vote Trump, 23 percent said they were unlikely to get vaccinated. Of the pro-Clinton respondents, 13.5 percent felt the same way.

While ten percent is not a mind-numbing difference between the parties (what the hell is with the 13.5% of Clintonites who don't vaccinate? "Vaccines work" has been a staple of Hillary's platform for some time now), it's a significant margin from previous polls. While Daily Beast writer Betsy Woodruff is quick to point out that this new poll is an outlier compared to previous polls, she does emphasize that even if there is not a significant partisan difference, Trump's influence on those skeptical of vaccines is significant.

When respondents were asked if they were going to vaccinate themselves and their families, they were also asked a follow-up question if they could name a public figure who supported their stance on the issue. While the pro-vaccine respondents gave any number of answers such as Barry Soetoro, Hilldawg Clinton, Ted Cruz (hey, even young earth creationists believe in medicine), or literally anyone else in the public sphere who isn't a complete ingrate, respondents who did not plan to vaccinate gave one answer more than any other: Donald Trump.

Of the respondents who were negative about vaccines, Trump’s name got mentioned the most; 12 percent of vaccine skeptics said they thought he shared their views. No other anti-vaxx celebrity got named as often as Trump.

Jenny McCarthy must be so jealous that she's been knocked from her perfectly botoxed yet somehow chemical-free throne.

Once again, 12 percent is not a fuck-off-humongous number, and even we will admit that the Beast's study leaves much to be desired in terms of methodology and relevance to previous polls. When Five Thirty Eight conducted a poll on the question of vaccinating all children, the poll showed that while Democrats are 11% more likely to support the mandatory vaccination, the poll conductors downplayed the difference between the parties because it was one of the few issues on which Democrats, Independents, and Republicans largely agreed.

So while the Beast's poll doesn't say that Republicans are going to give their wee ones polio, it does indicate that anti-vaccine sentiment has taken root among the Drumpfheads and it isn't going away. But what's the worst that could happen? It's not like a couple of private-prison-funded border patrol workers could cause the largest measles outbreak in recent history any time soon or anything.

Webcomic explains homeopathy as an empty bag of dicks

Our final story is less a story and more the best thing a friend of the bulletin ever sent us. Comic writer Ruy Platt decided to explain the ridiculousness of homeopathy to the masses using a Wonkette-favorite metaphor of a big ole bag of dicks, and lest we Buzzfeed ourselves, it's pretty perfect. Sources could not confirm if the dicks were of the rat variety or if they'd been lightly salted with poison.

Read the comic in its original source and check out more of Platt's work at the NSFW Dodgy Comics link.