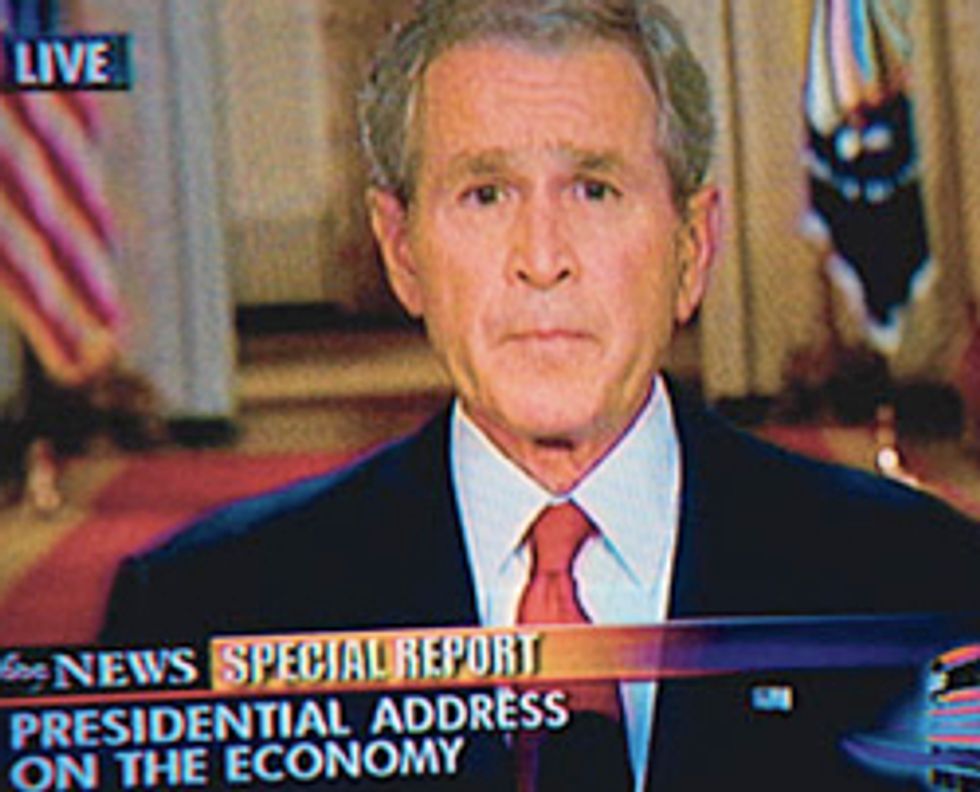 You may have seen on the Internets this morning various excerpts from what appears to be GQ's answer toVanity Fair's Levi Johnston article, in terms of the great "which major New York magazine can publish the weirdest and least fact-checkable 10-page fart of targeted-readership porn" journalism wars. "Matt Latimer," a late-term speechwriter for George W. Bush, has written a snippy sack of anecdotes from his time in/near the White House during the 2008 presidential race, the Wall Street collapse, etc etc. It could have been an interesting read, but here's the problem: it's not. It is one of the shittiest pieces of writing, ever, or at least since Uncle Tom's Cabin. Did you know that not a single person in the White House knew anything about anything except for smug mid-level stenographer "Matt Latimer," according to Matt Latimer?

If you would like to find the well-marketed blockquotes about Bush's thoughts on Sarah Palin and John McCain's campaign, you should be able to find them on like any blog. But we just want to focus on making fun of this Matt Latimer, the notable douche.

Maybe he should tell us about himself early on, because what we all care about is Matt Latimer! In one notably artless splash of cliches, we get the bildungsroman of a young shitsack:

As a young political geek growing up in Flint, Michigan, I’d always dreamed of heading to Washington to work for a conservative president and help usher in another Reagan Revolution. As soon as I was able, and with the support of my baffled liberal parents, I packed up my old maroon Dodge Dynasty and said good-bye to my sleepy hometown.

My youthful exuberance cooled as I moved up the rungs of power. On Capitol Hill, I worked for a congressman who “misremembered” basic facts, such as the “Eisenhower assassination.” I worked for a senator who hid from his own staff. I was assigned to coach Republican senators on how to reach out to the media and entertainment world. (You try explaining The View to a group of 65-year-old white Republican men.) At the Pentagon, as chief speechwriter to Donald Rumsfeld, I battled an entrenched civil-service system and an inept communications team.

In 2007 I finally made it to the Bush White House as a presidential speechwriter. But it was not at all what I envisioned. It was less like Aaron Sorkin’s The West Wing and more like The Office. After watching Karl Rove’s bizarre farewell to White House staffers and hearing the president dismiss the conservative movement I believed in (“I know it sounds arrogant to say,” he told me, “but I redefined the Republican Party”), I thought I could muddle through till the end. Washington might not have been the city I had dreamed of, but I figured things couldn’t get much worse.

Oh my god, die. Look at the sadness and despair you brought to America's single most promising young human being, you inept cock-slaps in Washington! Of which Matt Latimer is still not a creature!

In the first months I worked at the White House, I wrote any number of speeches praising America’s economic prosperity. There’d been month after month of uninterrupted job growth, after-tax income was increasing, exports were rising, inflation was down. “The fundamentals of our economy are strong,” we’d write. Because that’s what we’d been told.

'Twas a betrayal of the highest degree, to us, the word-writers! These things we'd been told: falsehoods. LIES, MY GOOD MAN, ECONOMIC LIES OF WASHINGTON!

Paulson was supposed to be a nonideological, pragmatic, sensible type. He was bald with glasses and had a scratchy voice that sounded like he had a thousand-dollar bill caught in his throat.

Editor Juli translates: "Paulson loved eating money. This is why the economy became so bad, because he ate all the money, we'd write. Because that's what we were told."

To look like we were doing more, we announced various initiatives, such as assembling an alliance to encourage lenders to renegotiate loans. For a while, the communications guys—Ed Gillespie and Kevin Sullivan—wanted the president to give a toll-free number for Americans to call for assistance with their mortgages. I thought that was embarrassing, as if George W. Bush were Jerry Lewis.

Oh, ha ha ha, ha ha, "ha," indeed, do you see what I just did there, hmm? I turned a remarkable phrase, with trenchant wit. This is what I do, because I am Matt Latimer. Those cretins Ed Gillespie and Kevin Sullivan produced what, in their own little minds, seemed like a bon idee -- helping humans with their house payments, or "mort-gages," a word I invented because I am smart -- but how very drab and tacky this potentially useful help line would have been. Telephone hotlines! In these corridors!

Of course, this threw the proverbial monkey wrench into our plans—and at the eleventh hour.

That's an actual sentence that GQ magazine published, in whatever context. We're done.

But maybe you'll have a different reaction.

ME TALK PRESIDENTIAL ONE DAY [GQ]