Dr. Ben Carson Explains The Science Of Gay, And It Is Prison Sex 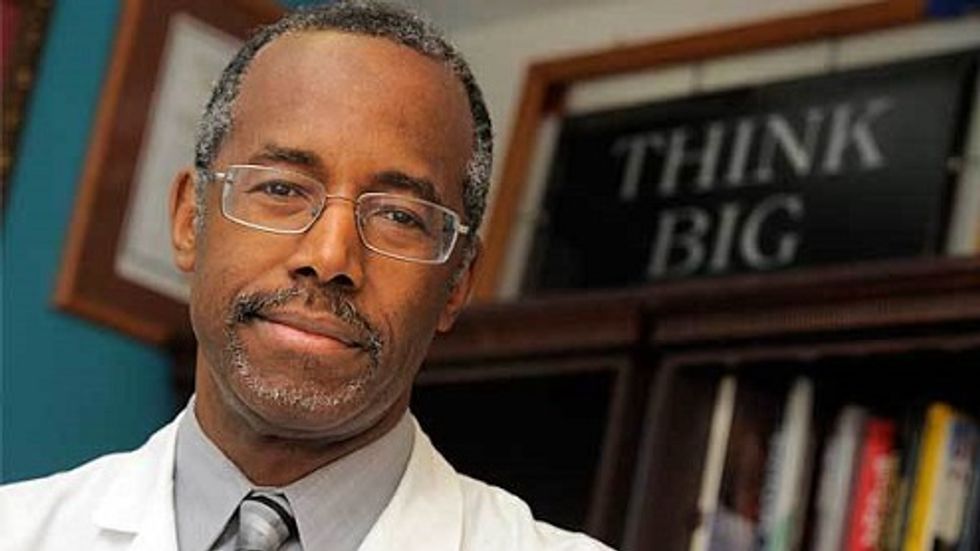 Brain doctor and conservative heartthrob hero Ben Carson has some real neat ideas on The Gay and how that works (it is all explained by "prison sex"), and you have to take his word for it because he is an actual doctor and A Expert on science stuff. (And prison sex.)

In a conversation with CNN's Chris Cuomo that is so brain-numbing even the good doctor himself would not be able to cure it, Carson explains why The Gay should not have equal rights when it comes to marriage:

Then Cuomo, who is not a doctor and therefore has no idea what he's talking about, reminds Carson that sometimes it is the job of Big Government to protect the rights of the minority from the bigoted discriminating will of the majority, "like what happened very often with slavery." But ha! That is completely different. Tell us why, Dr. Carson!

"Because people have no control over their race, for instance."

"You think they have control over their sexuality?" Cuomo asks.

"You think being gay is a choice?"

Yes, we've heard the "being gay is a choice" line many times for many years, and we have rolled our eyes every single time we hear it, but Dr. Carson has some hard-science proof that it is true.

Because a lot of people who go into prison go into prison straight, and when they come out, they’re gay. So did something happen while they were in there? Ask yourself that question.

Be right back, asking ourselves that question and then smacking ourselves in the face and saying, "Wow, that is a terrible question, why would you even ask that?" Because even if it were true that Hetero-Americans go into prison and choose to become The Gay while they are there, they actually usually bone chicks again once they have an opportunity. It is like "situational" gayness or something, we don't know, we are not a brain doctor either.

Tell us what the real point of all of this is, would you, Dr. Carson?

Here’s what’s important. Why do gay people want to get married? Because they want to have various rights. Property rights. Visitation rights.

Yes, that makes sense. Now tell us why you’re against that.

Why can’t any two human beings -- I don’t care what their sexual orientation is -- why can’t they have the legal right to do those things?

Damn, Dr. Carson, good question! You almost sound like some kind of gay-loving gay-lover. But wait, didn’t you start out saying that the constitutional concept of equal protection shouldn’t apply? We have a confuse here. So does Cuomo.

“That’s what they’re fighting for,” Cuomo points out.

“OK,” Dr. Carson says, “that does not require changing the definition of marriage.”

Aw, crap, now we are super confused. The Gay should have those rights, but they should just find some other way to have those rights that doesn't involve marriage? Cuomo, try to make sense of that for us please, even though you are not a brain doctor.

“But it would require covering that union as you do others, which is called marriage in our society.”

Hmm, you might want to double-check your science and your Constitution, Dr. Carson, because we think you might just maybe be wrong about that.