Dr. Rand Paul Just Looking Out For Hillary's Health Because She's SOOOOOO OLD Is All 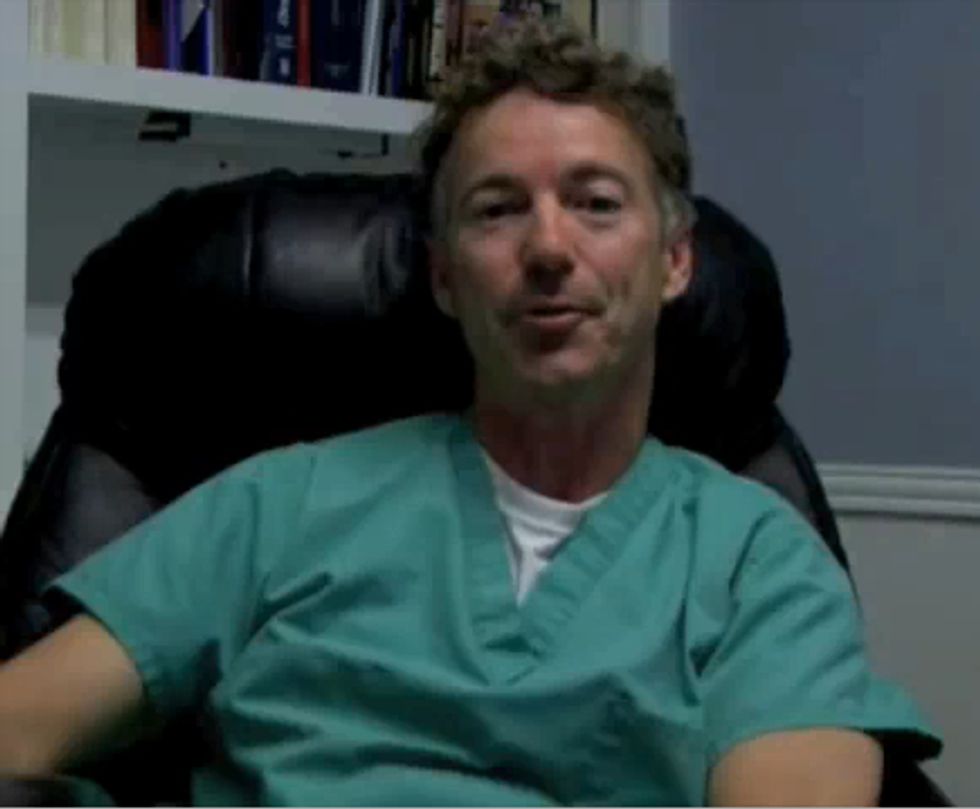 Not content to fight with his fellow Republican senators like Ted Cruz and Marco Rubio who would also like to be president (spoiler alert again: they also are not going to be president), Paul has already begun waging war against Hillary Clinton, just in case she decides she's bored and feels like beating the crap out of a Republican so she can live in the White House again, for kicks.

Paul's latest concern for Clinton is based purely on his medical expertise as a medical expert, and it has nothing whatsoever to do with him trying to trash her in every way his bad-permed brain can imagine:

“I think all the polls show if she does run, she’ll win the Democrat nomination,” he said. “But I don’t think it’s for certain. It’s a very taxing undertaking to go through. It’s a rigorous physical ordeal, I think, to be able to campaign for the presidency.”

Are you not overcome with the sincerity of the doctor's concern? What with being so old, and so a woman, and so a grandma, shouldn't Hillary Clinton be thinking about her own welfare and maybe skip the campaign and go straight to bingo night at the retirement home? For her own best interests?

Should we bother to point out that Ronald Reagan was 69 when he was sworn into office? Nah, that would be absurd. While we are unaware of any Republican ever suggesting Reagan was too old to be president, or too anything but absolutely perfect, we know that it would be an entirely different story if Hillary Clinton were sworn into office at the exact same age because ... well, because. Long live St. Ronnie!

It's probably also not worth mentioning that if Rand's daddy, Dr. Ron, had actually won his bid for president in 2012 (stop laughing, it could have happened!), he would have been in his late 70s when he was sworn into office, and according to our calculations, that's even older than Clinton and Reagan. Maybe we slept through all those interviews Rand gave in 2012, warning the country that his daddy was just too old to be campaigning, let alone presidenting. Or maybe it never happened because of how it never happened. Who knows? We report, you decide.

Of course we take Rand's concern for Hillary Clinton's health and well-being with all the seriousness he clearly intends. Why, it wasn't so long ago that he was expressing concern, for her naturally, about how awfully mean and cruel he would have to be, should she run, by reminding the country about that one time her husband got a blowjob from a lady who was not her, and how it was Bill Clinton who started the "War on Women," even though Hillary is definitely not also responsible because guilt by association, wink wink. (Please note guilt by association does not apply to the sons of former congressmen who send out whackadoodle racist emails. Totally different.)

Well, you know, I mean the Democrats one of their big issues is they have concocted and says Republicans are committing a war on women. One of the workplace laws and rules that I think are good is that bosses shouldn’t prey on young interns in their office, and I think really the media seems to have given President Clinton a pass on this.

He took advantage of a girl that was twenty years old and an intern in his office. There is no excuse for that, and that is predatory behavior, and should be something we shouldn’t want to associate with people who would take advantage of a young girl in his office. This isn’t having an affair. I mean this isn’t me saying he’s had an affair we shouldn’t talk to him. Someone who takes advantage of a young girl in their office. I mean really? And then they have the gall to stand up and say Republicans are having a war on women.

So yes, I think it’s a factor. Now it’s not Hillary’s fault, but it is a factor in judging Bill Clinton in history.

Again, please note that Rand Paul is merely pointing out the facts that must be addressed if Hillary Clinton has the audacity to not focus full-time on being a grandma. And yes, yes, we know the entire Republican Party is very concerned with Clinton's Traumatic Brain Injury! and how it may have caused her to do Benghazi to America, ergo, we must assume Clinton is not fit for office.

However, given that Rand is already started to show signs of exhaustion from his not-yet-declared run for president, struggling to balance the "doctor" and "libertarian" parts of his "brain," perhaps the spry young upstart should be more concerned with his own health first. Hillary Clinton beat the crap out of a blood clot. We're pretty sure she'll be just fine, even at her ripe old Reaganesque age.