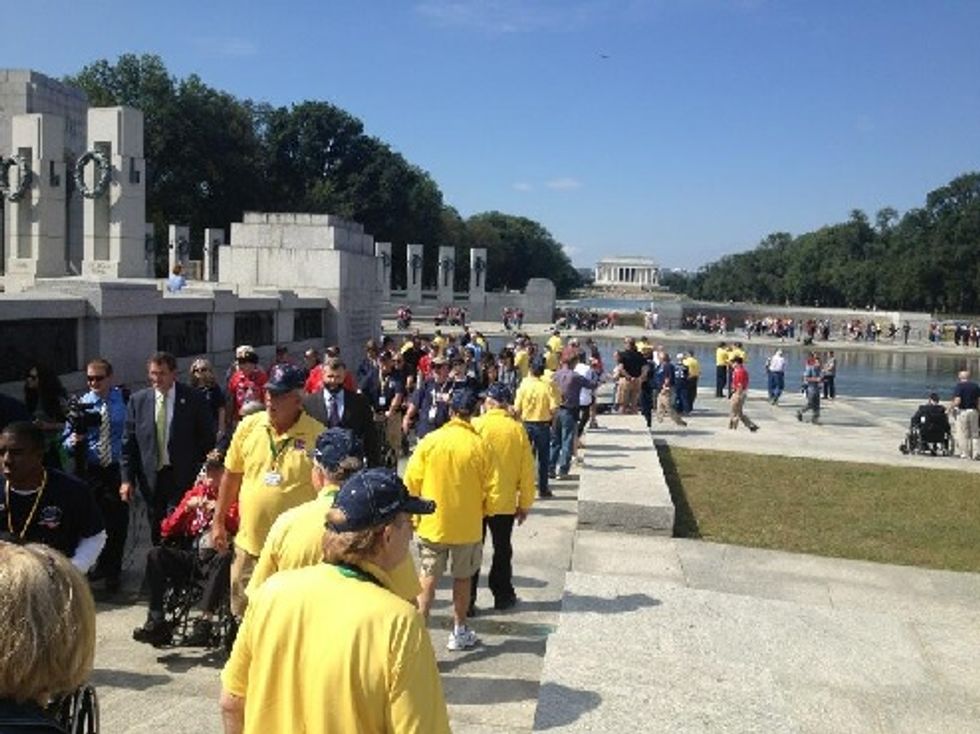 The good folks at Michelle Malkin's Home for Aggrieved Aggregators have made a shocking discovery! House Republicans did not shut down the park service, and in particular did not shut down theWorld War II Memorial on the National Mall. Turns out the orders to shut out WWII vets came directly from Barack Obama himself! And they have statements from a Park Service spokeslady, even:

Kathleen McKinley @KatMcKinley: There it is. The White House Office of Management & Budget ordered the closing of the WWII Memorial. Disgusting.

Yep, there it is. Harry Reid can point his grotesque fingers at the GOP all he wants, but the order to close the World War II Memorial reportedly came straight from the executive branch.

We would like to congratulate the Twitchers for their sleuthing. Never mind that it's Congress's job to ensure that government is funded -- once the money was no longer authorized, it was indeed the Office of Management and Budget (which manages federal facilities) that told the Park Service to shut down parks and monuments in DC, doubtless because Barack Obama Hates America's Troops.

Basically, the whole article is a collection of tweets from different people repeating that monuments in DC were ordered closed by the OMB, with ominous explanations like this:

The OMB, or Office of Management and Budget is part of the executive branch and reports directly to President Obama

Confirmed: Those barricades are Barry-cades.

Ah, but that's not all! Since there was suddenly a large crowd, accompanied by members of the Congressional Tea Party Caucus, showing up at the World War II Memorial, the OMB authorized Park Police to be on hand (you know, rather than just walk away from the situation altogether, the way things should work in a modern civilization). That brought us this insight:

Not only did the order to keep World War II veterans away from their memorial come from the top, but Park Service employees have been “excepted” from the furlough to make it happen.

Happily, Michele Bachmann was on hand to be photographed with all the WWII vets, and she made a solemn vow:

"President Obama and Harry Reid wanted the government to shut down, so they could say ‘Look at those evil Republicans, they want this to happen.’ ... [but we] aren’t going to let these World War II veterans be used as political pawns."

For the moment, the circus at the WW II Memorial may be cooled somewhat by a bit of administrative legerdemain that some unidentified smart person came up with:

United States Park Police announced that planned Honor Flight visits to the monument are considered “First Amendment activities,” which are allowed regardless of the government’s operating status.

Stars And Stripes reporter Leo Shane III tweeted earlier today that this distinction has already been put into effect, with Honor Flight veterans being admitted to the Memorial while non-vet tourists trying to go past the barricades were turned away.

So ... is that that then? Not bloody likely! Remember, before today, history's greatest tragedy was the time Barack Nobummer ordered the sequester so he could keep all the white tourists (whom he hates) out of the White House, because of how it is the Black House now, the end.