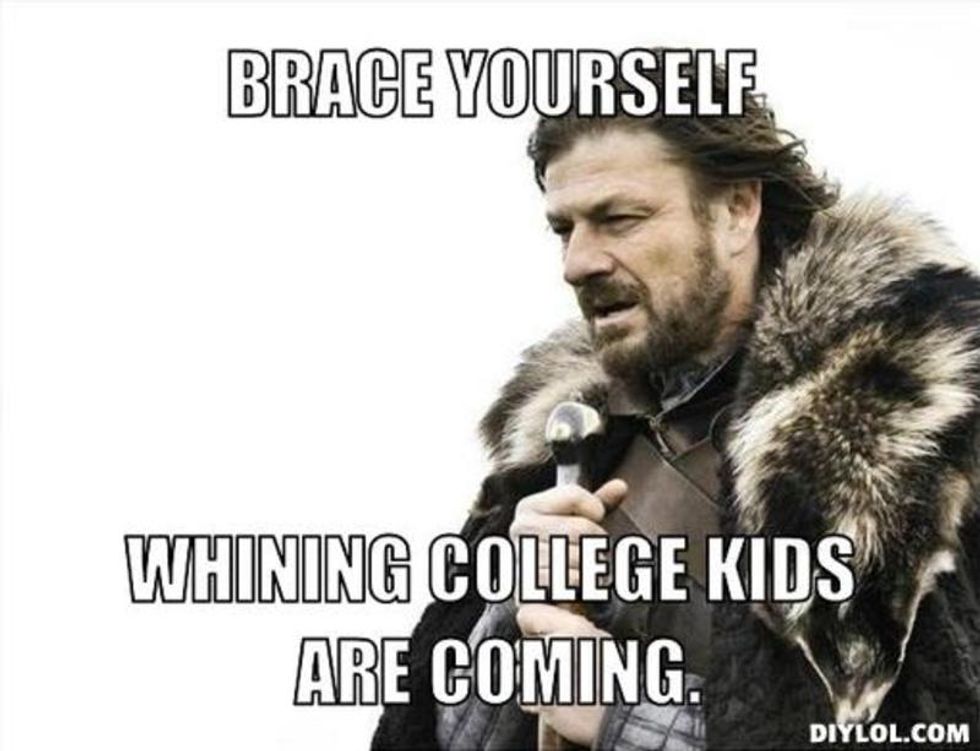 And this time, they brought Jesus.

Hating on millennial snowflakes and conservative Christian whiners at the same time? SIGN US UP! So here is a story from the 8th-ranked-in-the-nation Duke University, where, IN THEORY, idiots aren't allowed to study. Every year, Duke picks a book for all the new kiddies to read, as part of the Duke Common Experience Program, which "is designed to give incoming students a shared intellectual experience with other members of their class." Because "I just finished puberty and I'm really good at beer pong!" is apparently not "intellectual" enough for these snobs, we guess. This year, they chose Fun Home by Alison Bechdel, which Duke describes like so:

Published in 2006, this bestselling graphic book follows Bechdel’s relationship with her father, an English teacher and director of a funeral home, which she and her family call the “Fun Home.” Later, when Alison comes out as lesbian, she discovers her father was also gay, leaving Alison with a “legacy of mystery” to solve.

“'Fun Home’ is a book like no other. The author uses the unique graphic medium to tell a story that sheds a lot of light on important and weighted issues like mental health, interpersonal relationships and human rights, all critical issues that students will become acquainted with in college,” said Ibanca Anand, a student member of the Duke Common Experience selection committee.

Sounds interesting, and it has pictures in it! But unfortunately, some of those pictures are of lesbians lesbianing it up with each other lesbionically, and some of the kids say Jesus and their moms said they're not allowed to look at dirty stuff like that:

“Obviously, the purpose of Fun Home is literary and not pornographic in nature,” freshman Brian Grasso told the Daily Beast. “However, I still hold that personally, it would be dishonoring to God for me to read it and to view it.”

Jesus cries when you look at pictures of boobies. At least young Brian understands that the mere depiction of a breast does not constitute "pornography." However, one of his fellow frosh babies seems to be a little John Ashcroft-in-training, and probably should have gone to a fundamentalist safety school like Liberty or Bob Jones:

Freshman Jeffrey Wubbenhorst told the Duke Chronicle in an email that “the nature of Fun Home means that content that I might have consented to read in print now violates my conscience due to its pornographic nature.”

We'll toss the ball back to Grasso, who needs to reassure everyone that it's not because of the lesbian stuff, it's just that he's scared Jesus will see his boner if he reads it:

Now, you might be thinking, "Isn't college a place where you go to broaden your horizons and get exposed to things that challenge your worldview and way of thinking?" And you would be correct, but don't tell that to half the liberals on Twitter and most of the fundamentalist Christian community.

So maybe these bitching kids are the ones who need to read the book the most?

Of course, this isn't the first time this has happened with this book. College Of Charleston had a mighty row over how this lezzie coming-of-age story was "pornographic," and the assholes in the South Carolina House actually "voted to defund College of Charleston’s freshmen reading program to the tune of $52,000 because of the Fun Home selection." Because heaven forfend those kids hear about the existence of breasts or lesbians before their heterosexual wedding nights, as God intended.

Message to millennial college students, whether you're the liberal kind or the conservative kind: Grow up, you whiny ass titty babies. The world does not exist to cater to your personal feelings.