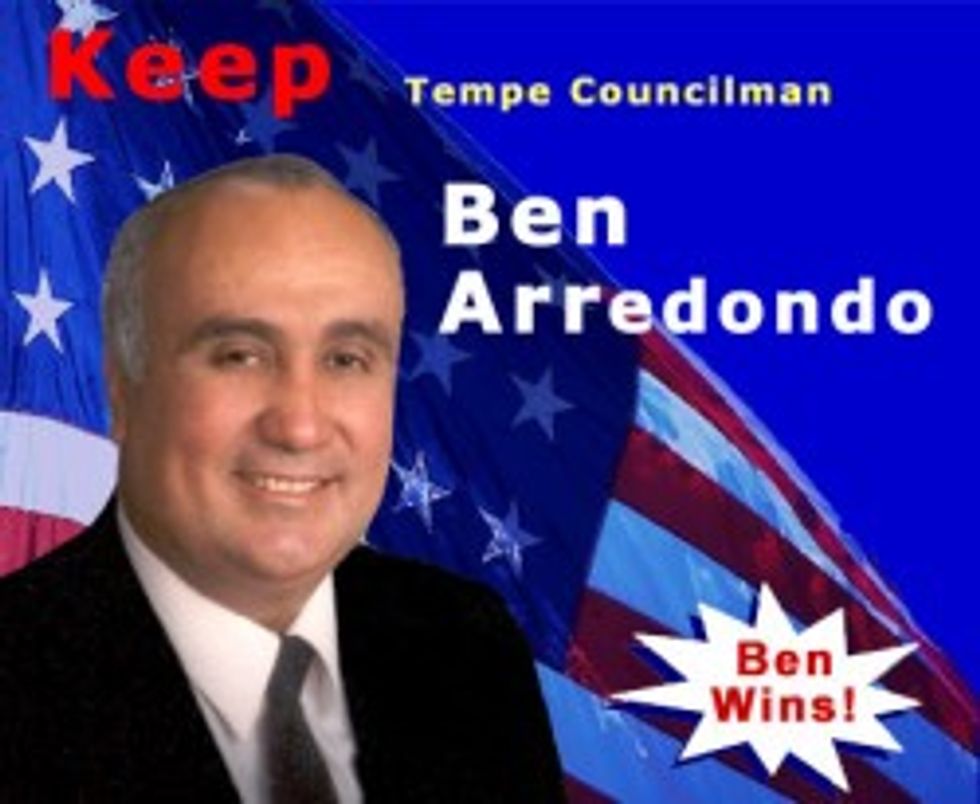 It is time for another Arizona politics bedtime story! Undercover FBI agents running a fake real estate company bought former Tempe City Councilman and current state Representative Ben Arredondo a few thousand dollars' worth of tickets to baseball and football games. He loved this gesture so very much that in return, "Arredondo brokered meetings between the undercover agents and other public officials, divulged information regarding the city of Tempe's bidding process, and attempted to persuade other city officials to approve the purported development project," allegedly, according to the indictment. If it's this cheap to buy off corrupt Arizona politicians, shouldn't the local underfunded public school science clubs hold a few dozen bake sales and take the proceeds over to the nearest elected official and get, say, a particle collider to put behind the gymnasium?

This started in 2009, according to the indictment, when Arredondo had the agents buy tables at charity events a couple of times, and then Arredondo would choose who got to sit at those tables.

Then Arredondo hit up an Arizona Cardinals game, courtesy of the "company"/FBI, followed by four tickets to see the New York Yankees in a playoff game in Los Angeles, then 18 Arizona Diamondbacks tickets, and finally, two tickets to a college basketball game between Duke and Michigan State, the indictment says.

The grand total of the charity tables and the tickets: Around $6,000.

Meanwhile, Arredondo was working with city officials to make the deal happen, at one point saying the company would have "continued support" when he transitioned from the council to the House.

"You guys will ask, you guys will have," Arredondo's quoted as saying. "I don't know how else to say it. We'll be just fine because not only [are we] covered at the city, we're covered now at the state."

Clever! And now Arredondo, a Republican turned Democrat, may end up paying a $1 million fine with some prison time, for his sports tickets. [Phoenix New Times]