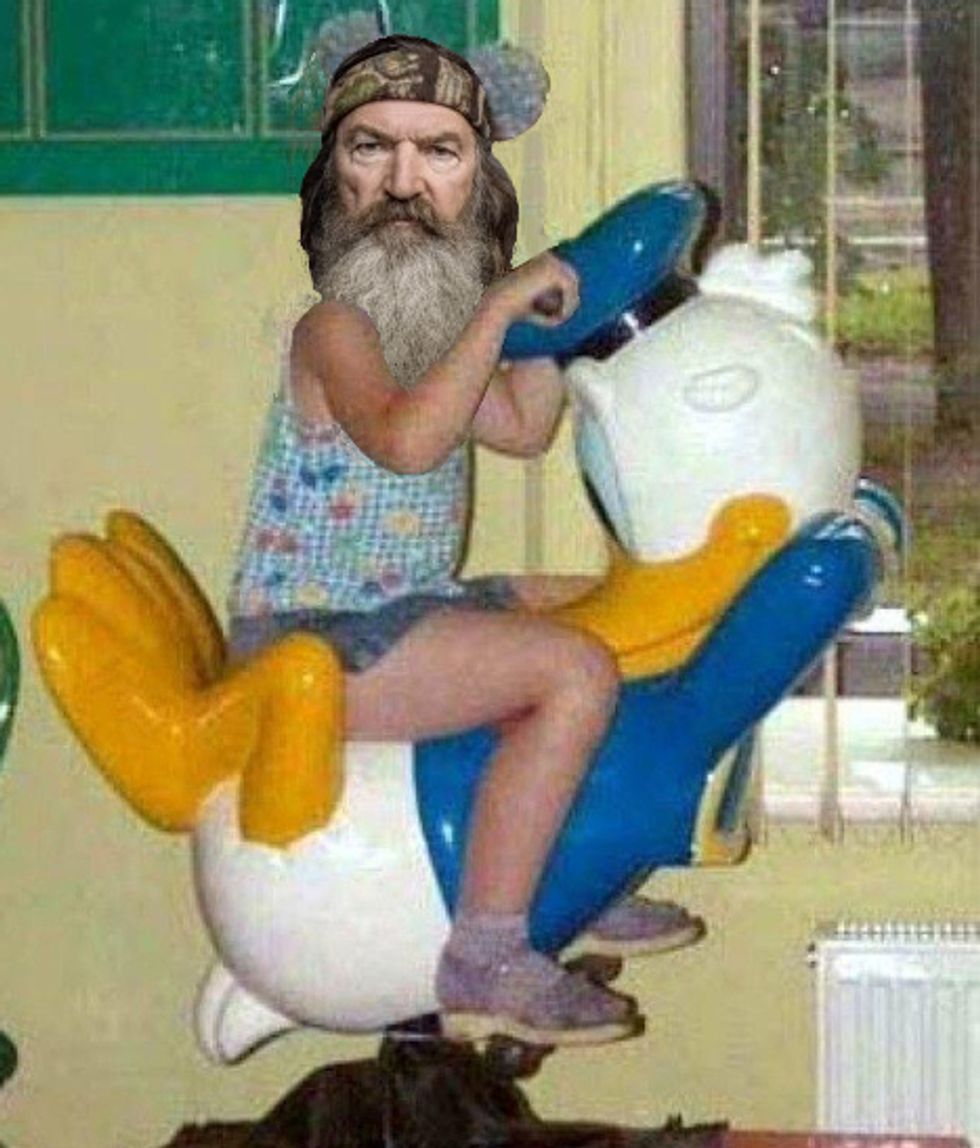 [contextly_sidebar id="3zEoA2dMlCvK59XGNP5BNT9ZZMQXZxTZ"]It's been a while since we've had a legit reason to check in with Phil Robertson, the boy matriarch of the "Duck Dynasty" teevee family (motto: Like the Duggars, but furrier!). And breaking news, but he still hates him some homosexuals. Now, when he took to the stage in Iowa Sunday to encourage everyone to support the most hated Canadian in America, Ted Cruz, he did NOT suggest he would cut anybody's penis off. He only gets that way when he talks about atheists.

But he does want errbody dead, if they are gross and perverted and bad and think gayness is OK:

Don’t you understand that when a fellow like me looks at the landscape and sees the depravity, the perversion — redefining marriage and telling us that marriage is not between a man and a woman? Come on Iowa! It’s nonsense. It is evil. It’s wicked.

It’s sinful. They want us to swallow it, you say. We have to run this bunch out of Washington, D.C. We have to rid the earth of them. Get them out of there. Ted Cruz loves God.

We ask this every single time, but WHY ARE THEY ALWAYS IMAGINING BEING FORCED TO SWALLOW THINGS? It's like Phil Robertson (or Bryan Fischer or Ted Cruz or name any other wingnut) thinks about how gayness is a thing that exists, and the very first thought that comes into their pants is about giant, rock hard penis ramming into their throat parts and taking away their freedom, in the hottest way possible.

[contextly_sidebar id="ggq9PNkDYCrGESfABj7L40IFirPu5Lvd"]So much penis. Phil Robertson cutting them off, Phil Robertson being forced to do mouth love to them, oh and remember that time he stumped against the Houston HERO ordinance by explaining that when ladies are in the potty, "putting on [their] Maybelline," he wouldn't be in the lady potty with them, due to how he'd be using his own duck penis to make man piss in the men's room? It was a reassurance all American women needed at the time.

[contextly_sidebar id="X9Y8vcdV0PBavDNfyLXWiMWjsGMafbrw"]Ted Cruz thought what Phil said was just real sweet and Christlike, because Ted Cruz is a fucking shitbag and a bad Christian:

"How about Phil Robertson. What an extraordinary human being," Cruz said. "I mean listen, God makes every one of us unique, but some are uniquer than others."

"What a voice Phil has to speak out for the love of Jesus," Cruz said. "What a joyful, cheerful, unapologetic voice of truth Phil Robertson is."

Now, the Iowa caucuses don't start for a few more hours, so we can't say this for sure, but if Robertson's endorsement is any indication, Ted Cruz is going to get his poutine-covered taint handed to him tonight. Why? Oh, just because none of the duck-calling redneck family's favorite candidates have winned ANYTHING the past year.

[contextly_sidebar id="fXPgAImXUYvxPydKLQU0sf0wmw0sG62V"]First Bobby Jindal was waving around his OWN hyphenated-American duck penis about how one of the grubby baby Robertson children, Willie Robertson, was his BFF, and look how the election has turned out for him. Then Willie ducksplained how David Vitter should TOO get to be the new Louisiana governor, because hey, who among us has never put on diapers and paid the DC Madam for sex with somebody what is not our wife? And then LOL Vitter lost.

So maybe Daddy Robertson's endorsement will be just as bad, and Ted Cruz will feel bad, because he just lost Iowa, awwwwww. God probably hates Ted Cruz too, so we probably won't even have to pray very hard.