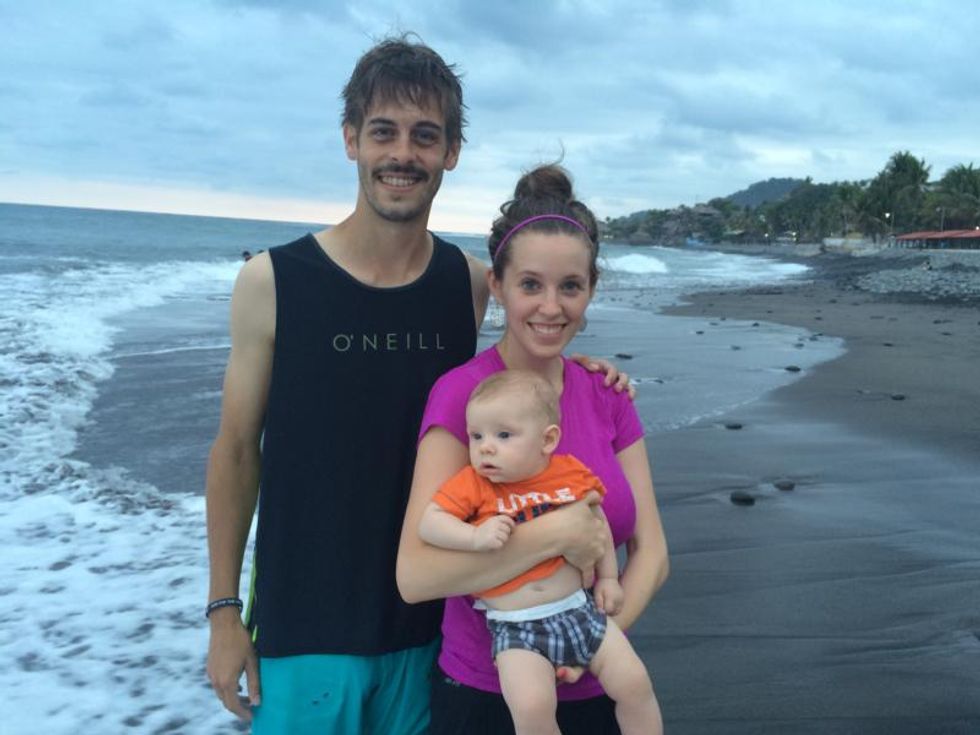 So Jill Duggar Dillard and HER unfortunate but marginally hot husband Derick have been handing out free Bibles to toucans in El Salvador or something, OR HAVE THEY? Maybe they've just been globetrotting around like common Kardashians, but in a sidehuggy no sex kind of way, and that is making their followers very GRRRRR:

Fans are beginning to question whether Jill Duggar and her husband are spending donated money on mission work or for personal expenses.

The 24-year-old former reality TV star and her husband, Derick Dillard, left with their infant son in late June — just weeks after she admitted that eldest brother Josh Duggar had molested her and three other sisters — for a lengthy mission trip to El Salvador.

The couple solicits donations through their Dillard Family Ministries, which an IRS representative confirmed was listed as a 501(c)(3) tax-exempt organization.

But a bunch of their fans are pointing out on Facebook that ever since they went to El Salvador to give the townspeople free Bible verse tramp stamp tattoos, or whatever Duggars do on vacation, they've been back to the United States like three times, they went to their cousin Amy's wedding, Jill went to New York to do a TLC thing, blah blah blah, IS THIS HOW THEY ARE SPENDING THEIR DONATION MONEYS?

“Jill and Derick are back in the states AGAIN !!!!!!!” complained fan Daisy Shay on the couple’s Facebook page. “THEY TRAVEL BACK AND FORTH BUT WANT US TO DONATE AND GIVE THEM MONEY…they entire Duggar cult lives and breathes for media attention now that the gravy train ran dry Jessa jumps n front of every camera in desparation. Narcissist behavior.”

There is not much English in that quote, but there is a lot of RAGE! Another fan said, "You will never get a straight answer, you are just financing their extended vacation,” and that's just the tip of the iceberg.

So really, what are they up to? Well, they SAY they're actually scaring gang members straight, either with Jesus or maybe with pictures of Josh Duggar:

The Dillards, who launched their ministry work in El Salvador last month, have shared that many who've given their lives to Jesus Christ were former gang members partly responsible for the country's increasing violent crime rate.

Right, these Duggar people are on the mean streets convincing violent crimers to Make El Salvador Great Again or whatever. We are skeptical! Let's check their blog:

This last month has been a bit of a whirlwind for us with a quick trip to the U.S. and back here to Central America over the weekend. When we were first invited to our friend, Michaella Bates', wedding we didn't think we were going to be able to make it. But once we realized that we needed to make a trip back to the States to do some filming for the upcoming TLC documentary, we were thrilled that the dates coincided with that of the wedding! We were able to make the stop in Tennessee on our way back here to Central America! We had to increase our class time on the front half of the week to make up for the time we would lose studying in the latter half of the week.

First we went to Michaella's wedding and the Lord was just really IN that place, and then we went to New York City, and the Lord followed us there too, and like such as! Anything about El Salvador?

Verbs! Verbs! ...and more verbs! LOL. This is what Spanish class has looked like for both Derick and I recently.

Also, in this picture, it looks like they're going to maybe be baptizing everybody in the ocean, or maybe they're all about to do a Jim Jones kinda thing, you never really know what cult members get up to when they head south of the border, but maybe this is evidence they are doing the Lord's Work:

Awesome. Yeah, Duggar fans, you're probably being scammed, or maybe you aren't, we don't fucking know. If you're interested in donating to an ACTUAL ministry that DEFINITELY won't scam you, may we suggest The Wonkette Wonkebago Fall 2015 Itinerant Panhandling Tour And Quitterthon? It's just like a normal mission trip, with soul-winning and everything, we pinky swear. You can make a donation right here.