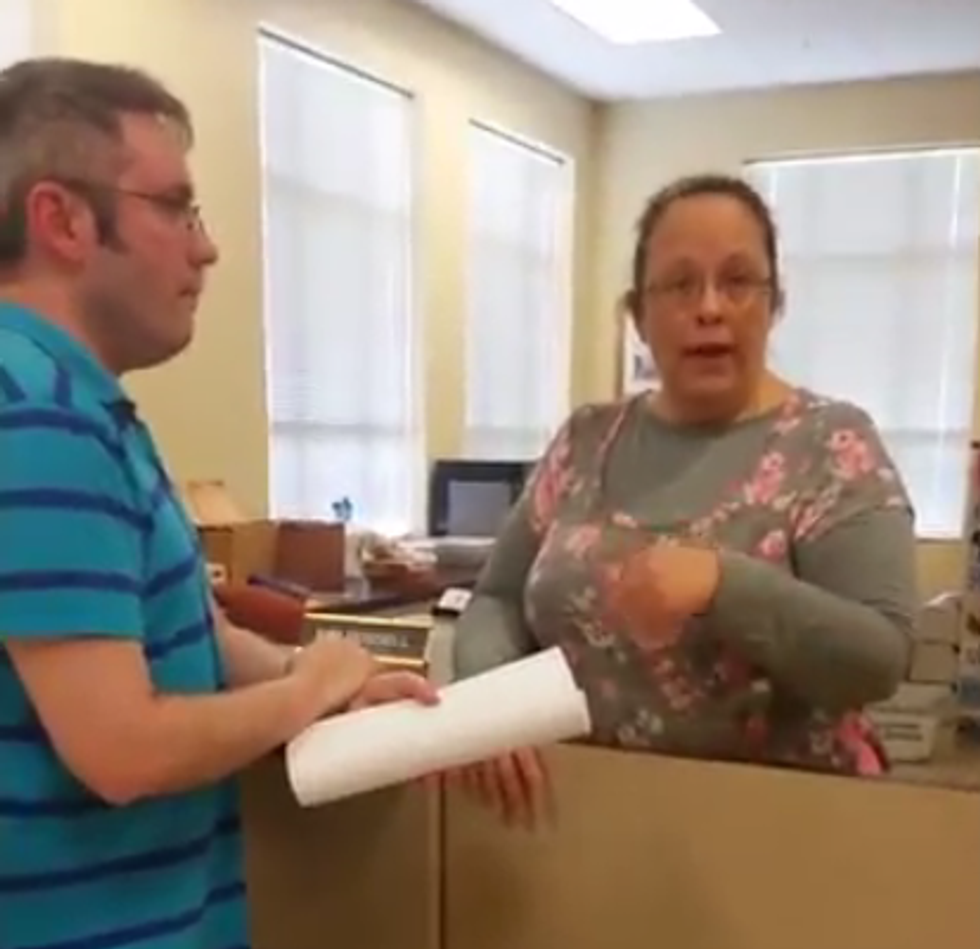 My name is Kim and I'm a total dick, how may I be of no help to you today?

Over the last month or so, most holdout county clerks have at least begun to acquiesce to the idea that yes, there gays in America and yes, those gays can get married now (to each other!), and if you want to have a job as a county clerk who issues marriage licenses, you have to give them to gays, even if you worship a real stupid version of Jesus who says that's bad. If you don't like that, you are free to get another job you're better qualified for, whatever that might be.

But this one dick-faced smegma-waffle lady in Kentucky, Kim Davis, just doesn't get that. You remember Kim Davis. She's the county clerk from the viral video, who acted like a total Grumplestiltskin toward those nice gays who just wanted a marriage license from her mean dumb ass.

Even though the Supreme Court ruled that gays are the best, and Gov. Steve Beshear sent a letter to county clerks telling them they can believe whatever they want, but they still have to follow the law, and even though Davis has been opposite married four times (four!) so she probably shouldn't be preaching to anyone about the sanctity of fuck-all, Davis says this is unfair, and she's suing for the right to not do her job. Of course, she's suing with the help of Liberty Counsel, that wingnut "law firm" known for being wrong and losing all the time:

“In no uncertain terms, Governor Beshear’s policies and directives are intended to suppress religion—even worse, a particular religious belief,” Liberty Counsel’s complaint points out. “Thus, although Attorney General Conway was given a pass for his conscience about marriage without any threats of repercussion, clerks like Davis are being repeatedly told by their Governor to abandon their religiously informed beliefs or resign.”

“Simply put, Governor Beshear is making secularism a litmus test for holding office in Kentucky,” said Mat Staver. “The governor is forcing clerks like Davis to choose between following the precepts of her religion and forfeiting her position, on the one hand, and abandoning one of the precepts of her religion in order to keep her position, on the other,” Staver concluded.

We ALMOST feel sorry for her on one count, which is that she's probably been told by Mat Staver and Liberty Counsel that she has "a case," when those who have been following Staver and his outfit for years (like yr Wonkette) know that he's an ambulance-chasing loser who only chases ambulances what say "God Hates Fags" on the side. Oh and sometimes his group defends "ex-gay" shysters who want to cram "ex-gay" abuse down kids' mouthholes, and they losethose cases too. Oh and, due to how it is a Christian law firm, sometimes their people defend known kidnappers, because Mommy only kidnapped that kid FOR JESUS.

Also, too, Staver thinks we should have "sanctuary cities" for gay-haters and their pet unborneded fetuses. He is, in short, a fucking idiot and a really bad lawyer.

But anyway, we don't really feel sorry for Davis, because she is a dumb asshole who needs to find another line of work, like maybe cross-stitching verses from Leviticus onto sweaters for cats. Alternately, she could, we dunno, just do her fucking job and stop whining, instead of acting like she's Dietrich Bonhoeffer or something.