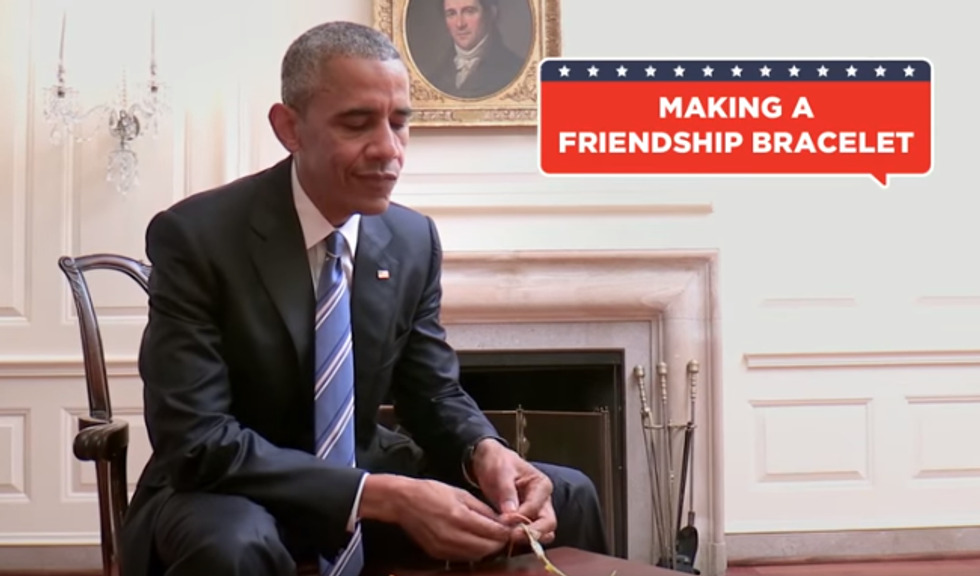 He is so goddamn cute we can't even.

Can you believe that dirty President Obama is out there making videos asking people to register to vote (for Lying Crooked Hillary)? What kind of American would suggest that EVERYBODY should take part in our political process? One who was born in the exotic foreign nation of Hawai'i, obviously.

Just kidding, we are fooling and teasing, like we always do. So, your president Barry The Great went and made a video with those Kids These Days over at Buzzfeed, about how you, yes EVEN YOU, should register to vote, because registering is the easiest! To illustrate just how easy it is, the preznit does FIVE THINGS that are way harder. For instance, as you see above, Barry Bamz can't even make friendship bracelets good. Come on, now, Hussein, didn't they teach you things like this at Secret Muslim summer camp?

As for other things Bamz has trouble doing, besides taking everybody's guns away, he has a real tough time with the board game Operation, just as all patriotic Americans do:

He can't get headphones apart good, because nobody can:

He can't make stacks of Cheerios very good either, which is not what you're supposed to be doing with your breakfast ANYWAY, Mr. President.

And finally, Obama has a hard time remembering all the people who have died on "Game Of Thrones." We can't remember those either, because we have never watched the program, but Buzzfeed says SPOILER ALERT! about that part. So if you're not caught up, guess you don't get to watch the Obama video :( :( :(

Also, SPOILER ALERT! again, but Obama's not actually that shitty at friendship bracelets. And awwwwww, he made one for Old Handsome Joe!

[wonkbar]<a href="http://wonkette.com/603323/hillary-clinton-might-win-arizona-lol"></a>[/wonkbar]This video is nice and happy and yet again shows us why Obama is the cutest president of all time. But it contains a very important point, which is that everyone must vote this year! Yeah, yeah, we've been writing hilarious posts lately about how LOL Hillary might win Utah and LOLOL she might take Arizona too. And it's true! This year could be a hilarious landslide for the Democrats. Then again, we just saw what happens when just a bunch of old racist Britishes outnumber the nice Britishes, and cast a vote the ramifications of which we still don't know. It could happen here, if the nice Americans get complacent.

So! This has been your Wonkette PSA about Buzzfeed's PSA about registering to vote. You do that right now! GO GO GO. Why are you still here? Oh, because you're already registered to vote, like a good citizen? Very well then, you may stay.