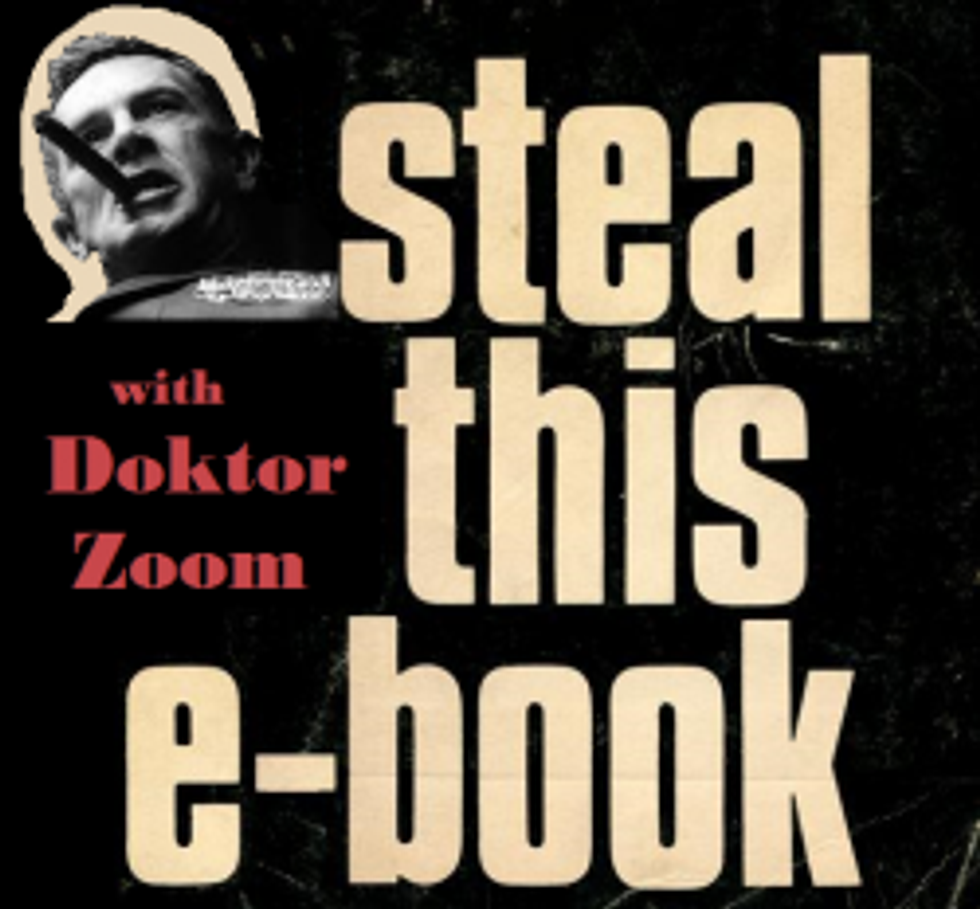 Conservatives have a hard time deciding what to find more shocking: thesuspension of White House tours because of the sequester, or the insanely outrageous cost of having an Executive Mansion in the first place, especially if the hired help puts their unworthy feet up on the furniture. Today's review looks at an e-book that falls in the latter camp, John F. Groom's The 1.4 Billion Dollar Man: Costs of the Obama White House, which was actually published last September but continues to be fodder for whining by NRO and moronic speeches at CPAC, so we will call it "timely."

Make no mistake about it: this e-book is one terrible little waste of electrons. We mourn for the senseless slaughter of ones and zeroes that otherwise could have gone into a video of a cat jumping into a box. But since this thing exists, let's give it the mockery it so richly deserves.

At its heart, The $1.4 Billion Man is Uppity Obama Porn, that genre of polemic that portrays the president as living far beyond any rational standard of decency, both because Times Are Hard and because Who Do Those People Think They Are? Predictably, Groom compares the Obamas to Louis XVI and Marie Antoinette, because instead of doing something to help average Americans (you know, like heading off a new Depression or reforming health care), the President in this alternate reality does nothing but play golf all the time while his wife goes on one exotic vacation after another, both of them fiddling while America burns. Groom at least refrains from overt race-baiting, focusing instead on accusing Obama of being the Worst Hypocrite Evar since he "campaigned on the idea of lessening income equality" but has "become the very height of unbridled personal excess in his own lifestyle."

Obviously, the figure invites people to conflate the ordinary expenses of running the White House with the supposedly extravagant habits of the Obamas, as if the total cost of vacations and golf outings came to $1.4 billion. Instead, the bulk of the costs are pretty mundane -- salaries for the White House staff, Secret Service, military staff attached to the White House, upkeep on Air Force One, and so on, and they don't change much, regardless of who sits in the Oval Office. But they do add up to a big scary number that sounds as if the Obama family spends days on end playing golf in designer clothes while vacationing on the Moon, an impression that Groom is happy to run with:

In fact, in the history of mankind there has never been an individual whose personal support— security, travel, office, residence, staff, and related expenses— has been as expensive as that of the current president of the United States, the $1.4 billion–per–year man.

Groom even pads that figure wherever possible, including items like the entire training budget for the Secret Service, and our favorite, throwing in a portion of the cost of a new fleet of presidential helicopters that was ordered in 2005 and cancelled by President Obama in 2009. Groom loves those helicopters and the $3.3 billion dollars that went into the program before it was cancelled. We hear about the helicopters again and again, as examples of waste, presidential self-aggrandizement, and even corruption -- Groom doesn't even suggest that the program actually involved bribery, but hey, it was expensive and he doesn't like it, so sure, corruption.

Somehow, we are supposed to be scandalized that the program spent $3.3 billion before Obama became president, and that Obama scrapped it because its projected full cost would be $11.2 billion -- a decision that even Michele Bachmann agreed with. So rather than saying, yippee, that saved $7.9 billion, Groom whines about money spent by the Bush administration, and about the $555 million paid to Lockheed to terminate the program, as if Barack Obama personally wrote the terms of a contract that was put out for bid in 2002 and signed in 2005.

Even when trying to portray the Obamas as high-living hedonists, Groom has to be dishonest. We get the good old Golf and Vacations Fib:

"President Obama played 29 rounds of golf in his first year in office and took 26 vacation days, far more than most CEOs could manage."

Needless to say, the more approriate comparison would be to other presidents. Golf? How about Dwight Eisenhower, who averaged 100 rounds of golf a year (and was eventually elected to the Golf Hall of Fame, go figure). Vacation days in first year of office? Reagan took 42, George W. Bush 69 -- but Obama has taken more time off than Jimmy Carter and Bill Clinton, so burn him.

But of course, Obama is Different. He is Not Like Us:

Obama has never really had anything at all in common with those he claims to represent: He grew up on Hawaii — a virtual fantasyland in the eyes of mainland Americans— attended Harvard Law School with other privileged people, married another Harvard– educated lawyer, and then immediately started running for office. He never held a typical job for any length of time, ran a business, or did anything that really led to a practical grasp of the economy or business. He takes his advice on economics from people like Warren Buffet, one of the world’s richest men, who is also completely insulated from the day– to– day grind that is reality for most Americans.

In other words, apart from not having had any experience running a baseball team into the ground, or being given an oil company to play with by his dad, Barack Obama is pretty much like any American President, isn't he? (Does Groom note that Warren Buffet is the guy who made an issue of the fact that his tax rate is lower than his secretary's? Don't be silly.) But no, Barack Obama is special somehow:

Obama’s billion-dollar lifestyle has exacerbated his removal from reality, from any thought of having to weigh costs and benefits in his own lifestyle.

It's kind of sad when an author starts believing his own deliberate conflation of White House operating costs and the President's "lifestyle."

Groom almost seems to have wanted to write another book entirely, one about what he considers the unnecessary trappings of the "celebrity presidency." Instead, it morphed into a polemic about Barack Obama, because that shit sells. Consider this example of what Groom considers a "transition away from democracy," as exemplified by a quote from another book:

“tourists are carefully guided through the White House, much as they would be guided through any royal palace in Britain. Today, the inauguration ceremony closely resembles the choreographed coronation of a king.”

Of course, this comparison comes from a book about presidential travel and lifestyle published in 2008. Time-travel Obama strikes again!

There's a weird, half-baked populism at work in this polemic. For instance, Groom doesn't seem to like the fact that presidents have staff at all:

Because their every need is catered to...they don’t spend any time worrying about housekeeping, or sitting in traffic, or waiting in security lines, or looking for babysitters, or finding cheap airfares, or shopping for groceries, or any of the scads of other routine tasks that occupy the day for normal Americans.

We're not sure why this is such a terrible thing -- we would far rather have the president paying attention to passing legislation or doing Peace Stuff than worrying about vacuuming or getting enough macaroni and cheese with hot dog's for his Valentine's Day dinner.*

Groom seems to yearn for a simpler time, for the days when "President Harry Truman drove his own convertible" to Camp David, or even better, the good old days when America was a happy land of agrarian wholesomeness:

In the early 19th century, presidents were routinely seen walking or riding by themselves in the capital. John Quincy Adams regularly went for an early morning swim in the Potomac with no protective detail (and no clothing— he swam in the buff).

The lack of presidential protection was a mark of pride for early Americans, as they believed that monarchs and emperors required guards due to their well– deserved fear of their people, while a democratically elected president should be guarded only by “the affections of his people.” If the leader is elected by the people and serves their interests, why should the leader fear the people?

We are guessing that the people's increasing access to high-powered rifles may have something to do with this. Strangely, though, Groom's "solution" to the high costs of the presidency mostly consists of insisting that the president never leave the safe confines of the White House, both because Air Force One and all those helicopters (HELICOPTERS! GRRRRRR!!) are expensive, but because if the president never goes anywhere, we can also save big bucks on Secret Service protection:

The president has a huge staff that can travel on his behalf, as well as very sophisticated communications equipment, including video conferencing equipment for which taxpayers have paid hundreds of millions of dollars. Use it. Of the four successful presidential assassination attempts, every one has occurred while the president was traveling or otherwise outside the White House.

Yes, he actually thinks that's an argument, and repeats it more than once. We would also point out that almost no car accidents occur outside of the garage, so we hope Mr. Groom never takes the insane risk of driving.

What's really irritating about this book is that there are plenty of far worse abuses of Executive power than the relatively piddling costs of presidential vacations. Barack Obama has done relatively little to reduce the obscene unilateral ability of the Executive branch to make war and snoop on citizens, for example. But that stuff is hard, and after all, we do have scary enemies. It's more fun to get angry about what Michell is wearing -- and did anyone mention how fat she is?

*As our own Derrick Wildcat notes, the sequester's interruption of White House tours may be a good thing for this very reason:

I think the Obama family could use a break from having to clean that great big house all the time because lots of people are there looking around at stuff. Now they only have to sweep, dust and vacuum like maybe once a week instead of everyday. I still think it is important that the kids wash dishes everyday so they don't run out of spoons and the littler sized plates.

"Sundays With the Christianists" is taking the weekend off, but will be back soon! In the meantime, join Yr. Doktor Zoom for the for the Wonkette Book Club! This month's selection is Al Capp: A Life to the Contrary, by Michael Schumacher and Denis Kitchen. It's a real book! Hardcover $16.66, Kindle e-book $13.43. Click these linkies and Your Wonkette gets a cut!