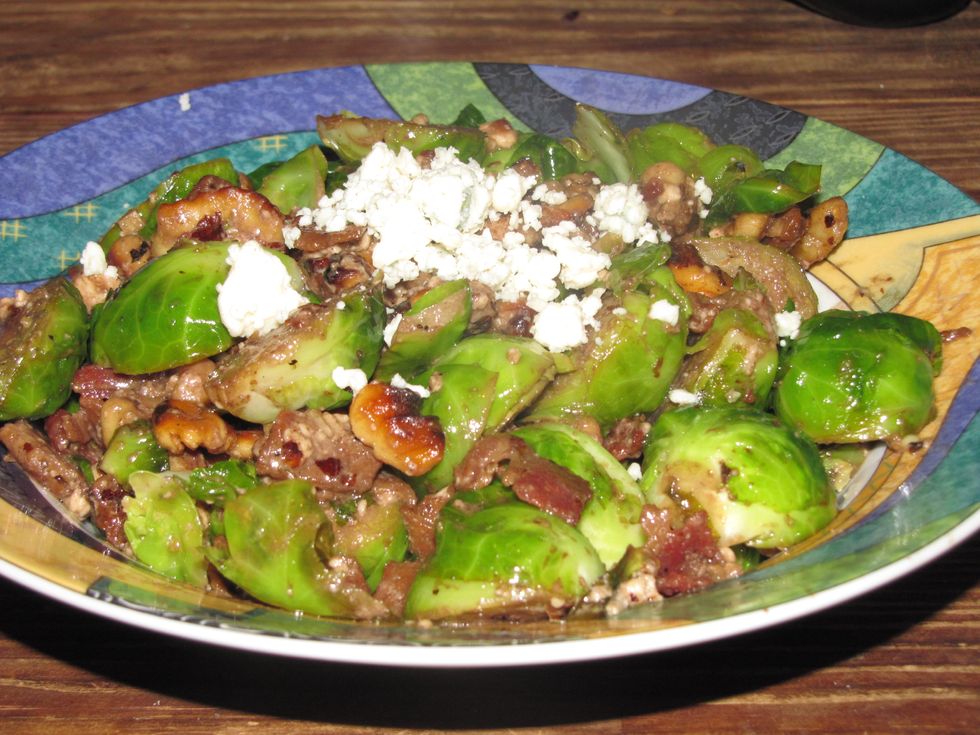 The farts are worth it.

You have been told by popular media to hate brussels sprouts. You have been lied to. Come to the glorious, cabbage-y light.

"BUT I DON'T LIKE BRUSSELS SPROUTS! THEY TASTE LIKE FARTS AND SADNESS!" No, friend, no. Trust in the Wonkette, for it will guide you to delicious brassicas. Welcome to a dish that is healthful and delicious, and we promise only one of those adjectives is a complete lie (it's the first one). It's going to serve 2-3, depending on how hungry you are. Or one person, if you're attempting to create a thermonuclear detonation with your butthole.

1. Start by making the dressing: a honey garlic vinaigrette. Whisk olive oil, balsamic vinegar, and garlic in a bowl. Add 3/4 of a teaspoon of salt and 1/4 a teaspoon of pepper. Add honey and a squirt or two of lemon juice, making sure it's well mixed-in. Set it to the side.

2. Cut the ends off the stems of your two lbs of brussels sprouts and halve them. This gets its own step because it's going to take you 15 goddamn minutes. Set them aside.

3. Take your 12 oz of raw bacon strips and chop them into roughly bite-sized pieces. Sprinkle the assembled chopped pork honks with salt, pepper, and brown sugar. Put a large pan on the stove and set it to medium-high; it's ready to go when it immediately sizzles when one of the pieces of bacon hits the pan. When you dump the bacon in there, the chopped pieces will stick together because that's how meatflesh do, so separate them as you cook. How long this will take depends on whether you're a decent, morally upstanding human being who likes their bacon very slightly chewy or a hopelessly broken monster who enjoys devouring the carbonized Ghost of Bacon Past. When the meat is done, use a slotted spoon to remove your succulent, nitrate-laden bacon chunks from the pan and put them aside in a separate bowl. Preserve as much of the bacon grease as possible in the pan during this process.

5. Turn the heat back to medium and add one tablespoon of butter to the pan. Take the brussels sprouts and add them to the butter-bacon grease mixture. Try to spread them out so the inside of each sprout half is touching the bottom of the pan and is able to caramelize. As the sprouts are cooking, add liberal squirts of lemon juice and a dash of salt. Cook them until they're tender, but not soft; if you overcook brussels sprouts, they become spheres of ennui.

6. While the sprouts are cooking, set the oven to broil and put a rack on the top level. Take about 5-6 ounces of shelled walnut pieces and toss them with a tablespoon of olive oil, 1/2 a teaspoon of salt, and 1/4 a teaspoon of pepper. Spread them out on a baking sheet in a flat layer. When the oven has finished heating up, put the walnut pan on the top rack. They'll take about two minutes on each side to toast, but check every 30 seconds; if they decide to burn, they're going to burn fast. Burning things is bad.

7. When the sprouts are pretty much finished cooking, set the pan to low and add the bacon to the pan, mixing them together. After they're good and well-mixed and the walnuts are done, dump all three in a large mixing bowl. Mix in roughly 1/2 lb of bleu cheese. Dish out and add however much dressing you'd like.

A word of warning: beware what's going to happen a few hours down the line. No force in nature can compete with the terrible, horrifying majesty that is the spoot poots, for they are as inevitable as death, taxes, and Michelle Obama's phat beats.