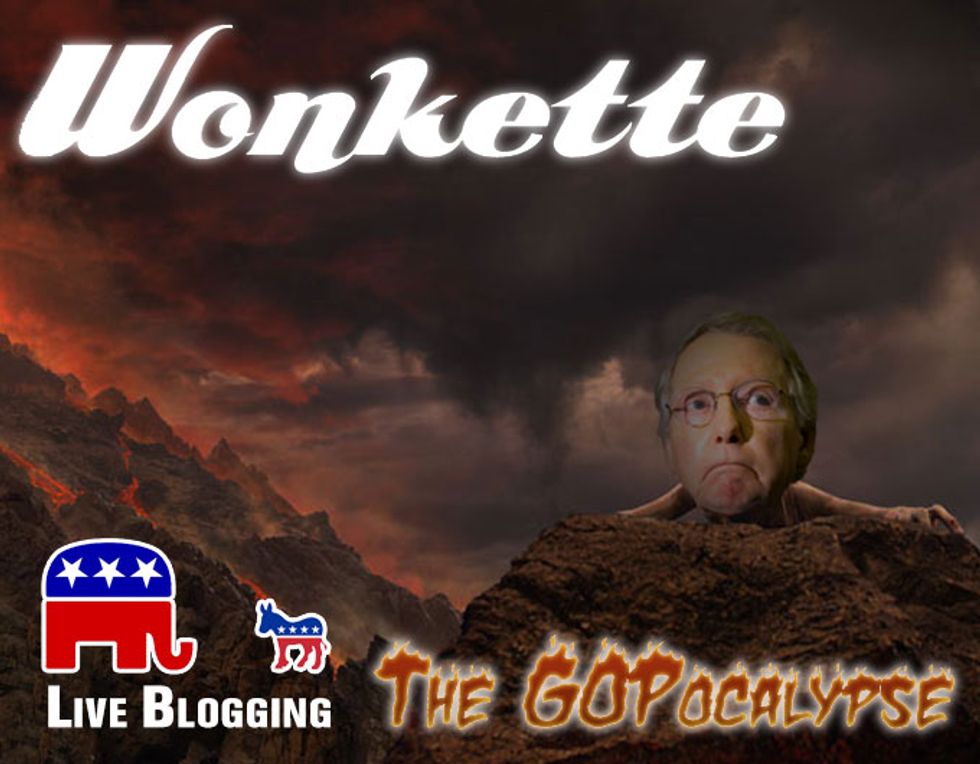 Gov. Nikki Haley wins re-election. And in West Virginia, the first Republican pick up of the night, Rep. Shelly Capito is the state's new senator.

It's gonna be a long night, folks.

7:50 p.m. Not surprisingly, the Ohio governor's race has been called for incumbent Republican John Kasich. Even though he is a terrible jerk, and he never answered that still-pending question: Why does he support a gag rule for rape crisis counselors?

7:55 p.m. Just a few more minutes before we have a whole fresh wave of bad news coming. Did we mention this makes a great cocktail?

7:56 p.m. ABC is reporting that Alison Lundergan Grimes called Mitch McConnell to concede the race. She did not mention whether she voted for Obama.

8:01 p.m. New Hampshire polls just closed, so we'll soon find out whether Scott Brown will be the next bro from that state, or whether he'll have to find a whole new state to have always been from.

8:02 p.m. Good job, everyone. We asked you to make Pennsylvania Gov. Tom Corbett suffer a humiliating defeat. And according to Fox, you did. Buh-bye, Tom.

8:05 p.m. According to Fox "News," the governor -- sorry, make that soon-to-be former -- governor of Pennsylvania lost because of the Penn State sex scandal. Oh, ok. Fox. You keep reporting, we'll keep deciding to laugh at you.

8:07 p.m. On ABC, they're looking at Teh Google to see what "the people" say. That's some Very Serious Journalism for you.

These are early numbers, of course. We all know Scott Brown will win all the lady votes, because he knows way more about chick stuff than Democratic incumbent Jeanne Shaheen. After all, he has a "house full of women."

8:15 p.m. Meanwhile, on Fox, George Will said -- and no, we are not making this up; we looked at the tape and everything! -- Obama is "the lamest of presidents, cause I can't remember who is still in office after his own party universally repudiated him." Yes. Repudiated.

8:19 p.m. In Florida, the governor's race is still too close to call, but the bubbleheads on ABC are pretty sure that fangate just might have sealed the deal for former governor and Republican-turned-Democrat Charlie Crist. Who is just as unlikable as current Republican Gov. Rick Scott. So basically, everyone in Florida hates both of them, but it's possible they hate Rick Scott the most.

8:22 p.m. Here are some more results you may want to celebrate or cry over. Your choice.

Mississippi: Republican and total fraudster Thad Cochrane wins Senate re-election. Someone should wake him up and tell him. And no, Chris McDaniel has not conceded the primary race yet. We hope he never does.

8:25 p.m. In New Jersey, Democrat Cory Booker wins his Senate seat for reals, so he's more than just a placeholder.

8:30 p.m. Also in South Carolina, Tim Scott (R) wins election, now also not a placeholder, and the first black man to be elected to the Senate from a Confederate state. South Carolina is still awful, though.

8:32 p.m. Mitch McConnell is giving his victory speech, and he's being sort of a gentleman about it?

A little while ago I spoke with my opponent. Secretary Grimes ran a spirited campaign. She earned a lot of votes, and she earned my respect. It took a lot of guts to take on a race like this. Because of the business we're in it also meant she would take some heat.

I admire her willingness to step into the arena and fight as hard as she did. We need more people who are willing to do that, not fewer. She deserves a lot of credit for it, this was certainly a hard-fought contest.

Ok, Mitch. But you're still a dick. And a liar. And a turtle.

"Tomorrow," he says, "the papers will say I won this race." The papers will also probably mention just how screwed Mitch is if he turns out to be Senate Majority Leader. Remember, the GOP civil war starts Wednesday.

8:52 p.m. Democrat Maggie Hassan wins the New Hampshire governorship, and she didn't have to show her nipples.

8:57 p.m. So far, ABC is the only one calling Scott Brown a loser. Wait, that's not right. We all call him a loser. But ABC is the only news outlet calling the New Hampshire Senate race. That's okay, we can twiddle our thumbs until there is universal agreement that Scott Brown is in fact a loser. And then ...

9:03 p.m. In South Dakota, Republican Mike Rounds wins a Senate seat. Like we didn't see that coming. WhatEVER.

9:10 p.m. Well, sigh, we knew this was coming. Greg Abbott is your new governor, Texas. But you know what? We STILL stand with Wendy.

9:19 p.m. On ABC Cokie Roberts, just said Iowa Republican state Sen. Joni Ernst, who wants to be a big-time grown-up U.S. senator, is the "surprising fresh new face" of this election. Cokie Roberts did not mention that Joni Ernst is also straight up bugfuck CRAZYTOWN CRAZY. Agenda 21, anyone?

9:23 p.m. Polls closed in Colorado. Remember, that's where all the voter fraud will be taking place, now that voters can send in their ballots by mail for the first time ever except for how they've been doing that for the last two decades. We assume Democrats will win everything. We're just waiting for James O'Keefe to confirm ...

9:54 p.m. Al Franken was good enough, smart enough, and gosh darn it, Minnesota liked him again. And he won re-election to the Senate by a lot more than 312 votes this time around. Lizard People had no comment on their apparent loss.

10:13 p.m. Based on CNN exit polls (which may or may not be correct because CNN and also because we had to do our own math and what are we, gay math wizards?):

Louisiana (which will go to a runoff ,but for shits and giggles):

10:26 p.m. Well, despite Democrats TOTALLY frauding the election in Colorado, it looks like Republican Cory Gardner is the state's new senator. So weird how that happened, even with all that fraud, huh? Gardner's winning move was pretending he isn't an anti-choice extremist who will take away your birth control, even though YES HE SO WILL. Dammit. Who's ready for another drink?

10:33 p.m. Hate to break it to you folks, but it's just going to get worse from here. Republican Gov. Scott Walker wins re-election in Wisconsin, looking forward to the 2016 race in which he has absolutely nothing to say or offer that's any different than the other dozen GOP candidates.

UPDATE! Wonketteers, if you're still with us, join us for The Official Dregs of Electoral Returns over at Live-blooog III!