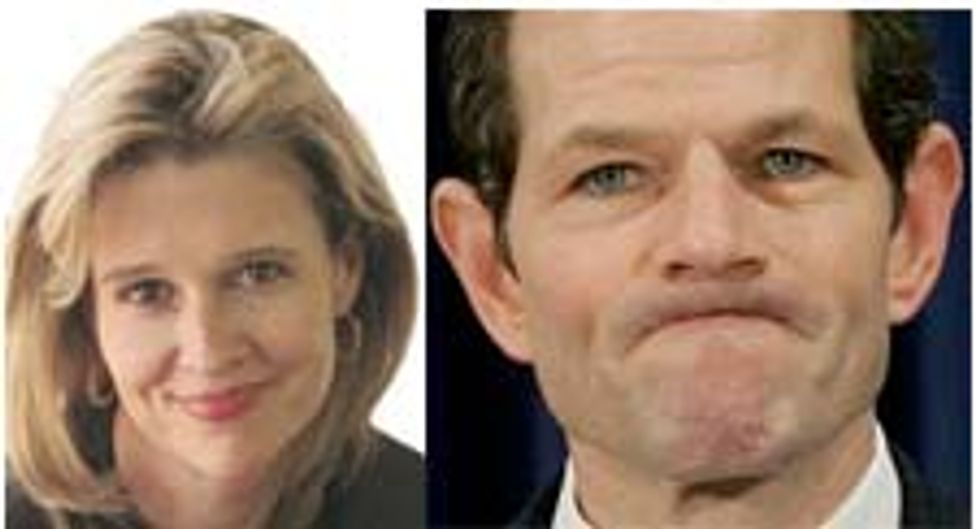 Do you worry every time you leave your house about encountering Eliot Spitzer, who will attempt to pay you for sex, or Kathleen Parker, who will attempt to determine if you are a"full-blooded American," and then bludgeon you with her Pulitzer Prize if you aren't? Well, now at least the period from 8 to 9 p.m. every night will be safe, because these two will be busy making eyes at each other on CNN during that time period. Quick, scurry out and purchase supplies!

Spitzer and Parker's Olde Time Politics Variety Hour will replace Campbell Brown, who was too good and pure for this world. Remember how CNN used to have shouty shows where political enemies would shout at each other, loudly, before Jon Stewart shamed them out of it? Well, that's not what this show is about! Instead, it will offer "a lively roundup of all the best ideas." ALL THE BEST IDEAS, ON ANY TOPIC. If your idea isn't rounded up by this show, it is not the best, or even very good.

But wait, with Spitzer an avowed liberal whoremonger and Parker a self-described "rational conservative," won't the show inevitably devolve into acrimony?

"As a veteran print journalist, I am appropriately respectful of the challenges posed by the medium," said Parker. "But I'm thrilled by the opportunity to discuss the issues that matter to me -- and that aren't heard often enough on television -- in a conversation with one of the nation's most brilliant, fearless and original thinkers. With Eliot Spitzer as my co-host, Wall Street and Main Street will finally meet. It can't possibly be boring."

"Kathleen is an extraordinary intellect whose sharp observations and wit are certain to resonate with viewers," said Spitzer. "I look forward to working alongside her in a discussion that will inform, challenge, and entertain."

Whichever CNN marketing intern came up with those lines and attributed them to these two hosts deserves a Pulitzer plus the governorship of New York plus a Congressional Medal of Honor, for being able to put those words in that order, in reference to Eliot Spitzer and Kathleen Parker, without vomiting to death.

(Your Wonkette morning editor, in case you aren't picking up on it, will probably not be watching this show.) [CNN]