Elizabeth Warren Pretty Sure She Knows A Thing Or Two About How Banks Work, Thank You 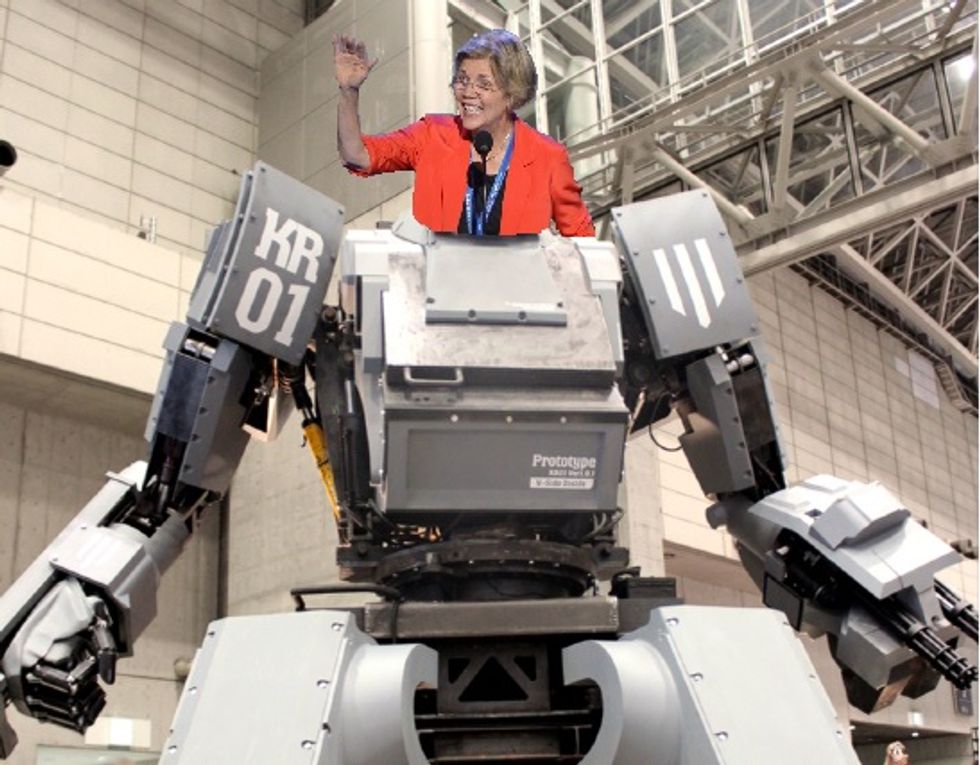 There's this guy, Jamie Dimon, who's the CEO of JPMorgan Chase. He thinks it's sad that banks aren't allowed to break the law. And Wednesday, he said a real Stupid Thing. He said, to a whole greedful room of bankers, that he wasn't sure whether Elizabeth Warren really gets banking: “I don’t know if she fully understands the global banking system,” he said, before generously offering to explain it all to her, most likely in itty bitty words that even a Harvard Law professor could understand.

Now, you know and I know that Elizabeth Warren knows banking. That's precisely why bankers don't like her -- she knows their game entirely too well, but they're convinced she can't really understand it, because she doesn't love it and recognize it's the greatest game ever. She's like one of those people who, no matter how many times you explain the complete awesomeness of Dungeons and Dragons, won't even take the time to make a character sheet. Except that in this case, they're a band of Chaotic Evil Orcs who want to be Dungeon Masters for the global economy.

After initially offering no comment on Dimon's speech, Sen. Warren had a few things to say on the matter when interviewed for HuffPo's "So That Happened" podcast Thursday.

First, she made some excellent points about reforming how we pay for higher education and how to fix student loans. Then the conversation turned to what that Jamie Dimon fellow said (at about the 7:40 mark):

Host: There's a guy, I dunno if you've heard of him, he works for a company called JPMorgan Chase. His name is Jamie Dimon, have you...?

Other host: He's an obscure figure.

Elizabeth Warren: I have heard of him.

Host: He said some stuff this week about you, I'll read you a quote: "I don’t know if she fully understands the global banking system.” Was he mansplaining to you?

Also, too, Warren was asked if she thought -- speaking of understanding banking -- whether regulatory agencies, like the one she helped initiate, the Consumer Financial Protection Bureau, have any hope of keeping up with the tricksy banksters, considering that so many top graduates in finance and law go straight to Wall Street to devise ever more clever ways of using the system to make money, no matter what the regulatory environment is. Warren agreed that Washington seems always to be playing catch-up:

When you do regulations that wait until, you know, the bank invents something else in order to trick people or to take on more risk and shift it over to the taxpayers, and regulators are always two steps behind trying to figure it out, that one is a tough approach ... we need, structurally, to take some of the risk out of the system...banking that is backed up by the taxpayers needs to be simpler and easier to follow, in part because that makes regulation easier.

Every time these guys come in with these incredibly complicated banking structures and subs, you know, cross-guarantees and reverse repos, and a zillion different things that they're trying to do under the umbrella of a federally guaranteed bank ... and then they come in and complain about, "Whoa, regulations are tough and regulations are too complicated!"

There's a way to fix that: If banking is boring, the regulatory part can be boring, too. If you want to go out there and take on risks, OK, go out there and do it, but don’t do it within the structure of a bank that gets backed up by the federal government.

Wow, she's like some kind of crazy socialist, isn't she? Clearly has no idea how finance works. If she ever gets a chance to sit down for tea with Mr. Dimon, perhaps on CSPAN, perhaps she can straighten him out on a few things and remind him that federal regulatory power can even beat level 10 Summon Monster spells. And his Invisibility Cloak is no match for our Elizabeth Warren tees.