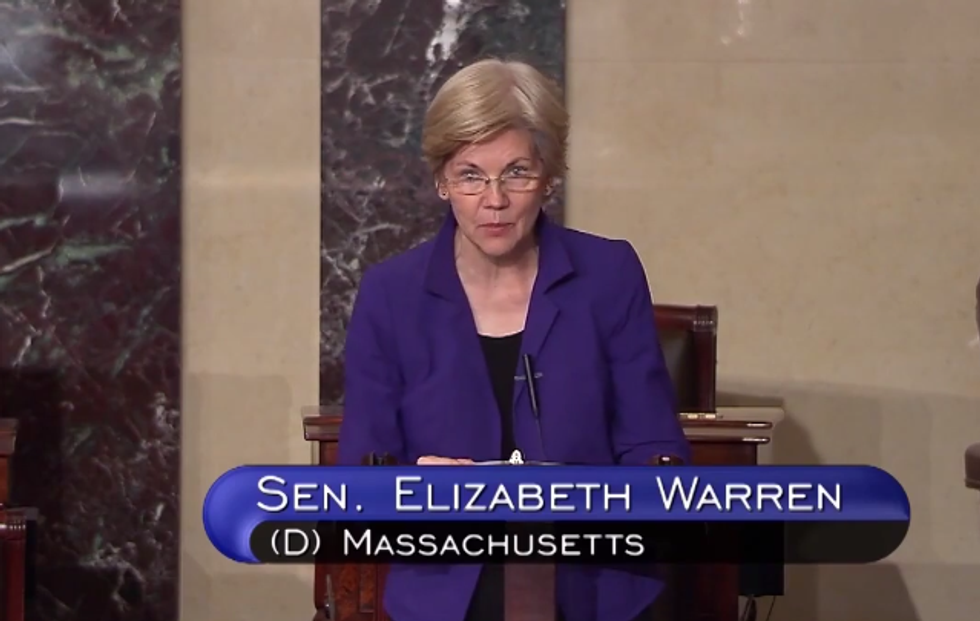 Leader of the opposition

We are still waiting to see how The Opposition Party truly steps up to handle the threat of the Donald Trump presidency. Elizabeth Warren and Bernie Sanders both are taking some heat for their willingness to work with Trump on good things, and there will surely be many discussions and adjustments as the Trump presidency actually begins to take shape. We do hope they're reading their history books right now, to make sure they do not repeat the mistakes of the past. (COUGH COUGH VICHY DEMOCRATS COUGH COUGH.)

But Sen. Warren is no fool. She spent the 2016 campaign being a burr in Trump's ass, and if her speech on the Senate floor Thursday is any indication, she harbors no plans to stop doing that. So, since it is Friday, and we're heading into a holiday week, let's try to have some hope while we watch Warren yell her face off about what's 'bout to happen:

Some key quotes, for your edification:

It's barely a week, but we've already seen disgusting ideas emerge from Trump Tower. Put a white supremacist in the White House. Float a plan to register all Muslim Americans. Draw up plans to round up millions of human beings and rip families apart across this nation. It is sickening, and we will fight back!

Warren then addressed Trump's bullshit statements about "draining the swamp" and his promises he would "not be controlled by the donors, special interests and lobbyists who have corrupted our politics and our politicians for far too long," reminding us those were HIS WORDS. And then she called him out for his rank hypocrisy:

Big surprise! Trump is not draining the swamp. Nope! He's inviting the biggest, ugliest swamp-monsters in the front door and turning them loose on our government and on our economy. In just one week, the president-elect has elevated a slew of Wall Street bankers, industry insiders and special interest lobbyists to run the show in his transition team.

Warren named ALL KINDS OF EXAMPLES of lobbyist whore people sliming all over Trump's transition team, demonstrating for sure and for certain that Trump's supporters got taken for a ride. Predictable, because Trump's entire career has been one big marketing scam.

Trump's very first decision is to hand over the keys of government to the worst kind of DC insiders and special interests. It seems like all those promises to stand up for working people were just a giant con.

Sen. Warren might be willing to work with the new regime here and there, but she's got her eyes wide open, and so must you.

We're gonna be OK, folks, but only because we're not shutting our eyes. DO YOU HEAR US? STOP CLOSING YOUR EYES, WE WANNA SEE YOUR SEXXXY PEEPERS RIGHT NOW!

Elizabeth Warren's final FUCK YOU, MISTER in this speech went like this:

In one week, we've seen what Donald Trump's promise means: Nothing. His word, his promise to the American people is worth nothing. Well, Mr. President-Elect, let me be clear. I am ready to fight on behalf of the millions of Americans you have lied to. That includes the millions who voted for you, and the millions who didn't.