Elizabeth Warren To GOP: Exactly How Stupid Are You? 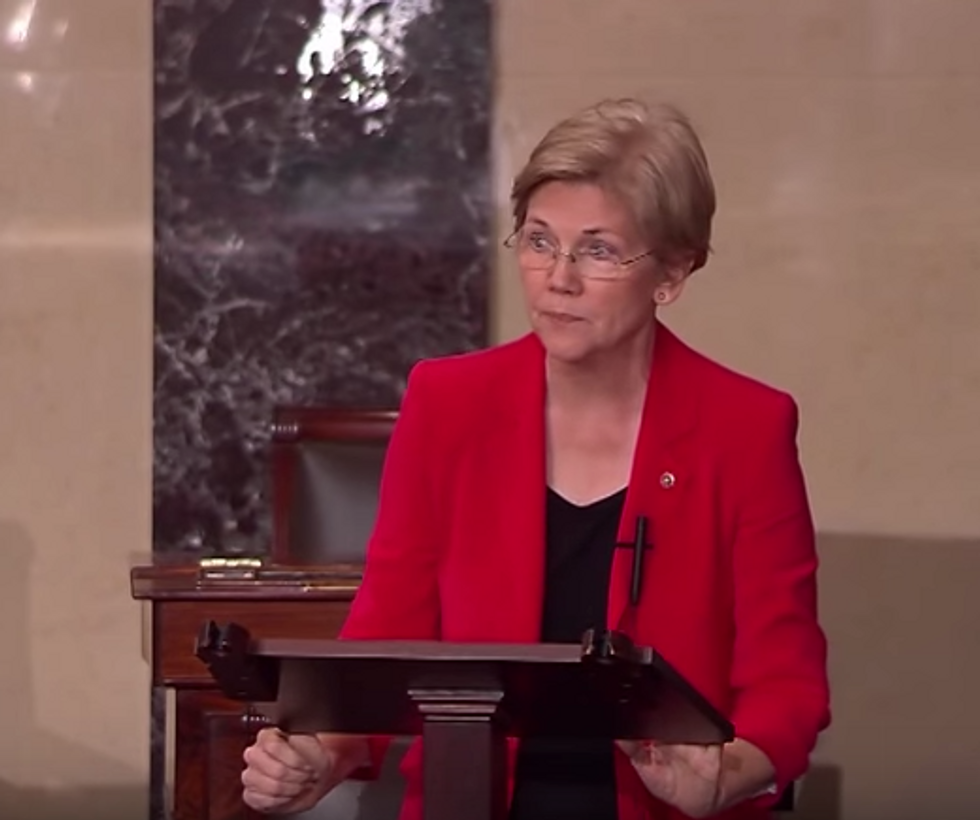 Senate Republicans tried to kill Planned Parenthood. Again. It didn't work. Again. It will never work. Women will give all their monies and hold their breaths until they turn blue to keep their favorite ladyparts healthcare provider alive and well. Just ask President Mitt Romney, who promised to get rid of it, and had his robotic ass gift-wrapped and served to him with a shiny bow, by women. Because women friggin' LOVE Planned Parenthood, and they friggin' HATE when Republicans try to take it away from them. Oh, and they also hate Mitt Romney, but who doesn't?

The Senate floor flooded with the tears of men, who love the little babies and the little ladies. Like Sen. James Lankford (R-The Other Asshole From Oklahoma), who said he has daughters! And a mom! And trying to defund Planned Parenthood is -- yes, REAL QUOTE HERE -- "a men's issue."

Fuck him. Fuck all of them. They lost, which is what matters most. That doesn't mean they won't try again; they will. They will try forever and ever and then some. Did we mention fuck them? Because fuck them some more.

Here is your nice time silver lining, though: a most excellent speech from Sen. Elizabeth Warren, Our Blessed Saint of Progressive Badassery. She lays it all out, professor-style, the way she does. The way we love. Here are all of her words, for you to read and fap to:

I come to the Senate floor today to ask my Republican colleagues a question: Do you have any idea what year it is? Did you fall down, hit your head, and think you woke up in the 1950s? Or the 1890s? Should we call for a doctor? Because I simply cannot believe that in the year 2015, the United States Senate would be spending its time trying to defund women's healthcare centers.

You know, on second thought, maybe I shouldn't be surprised. The Republicans have had a plan for years to strip away women's rights to make choices over our own bodies. Just look at the recent facts.

In 2013, Republicans threatened to shut down the government unless they could change the law to let employers deny women access to birth control.

In March of this year, Republicans held up a non-controversial bipartisan bill to stop human trafficking. Why? Because they demanded new anti-abortion restrictions to cover private funding meant to help the victims of human trafficking.

Over the past few years, Republicans have voted to repeal the Affordable Care Act more than 50 times, including the portions that require insurers to cover contraception.

Scheduling this vote during the week of a big Fox News presidential primary debate, days before candidates take trips to Iowa or New Hampshire, isn't just some clever gimmick. This is an all-out effort to build support to take away a woman's right to control her own body and access to medical care she may need.

Now this affects all of us. Whatever your age, wherever you live, I guarantee that you know someone who has used Planned Parenthood health centers. No one may mention it at Thanksgiving dinner or paste it on Facebook for the whole world to know. But just look at the facts. One in five women in America is a Planned Parenthood patient at least once in her life. Every single year, nearly 2.7 million women and men show up for help at Planned Parenthood.

But just to be clear, even though the abortions performed at Planned Parenthood are safe and legal, the federal government is not paying for any of them. Not. One. Dime.

For almost 40 years, the federal government has prohibited federal funding for abortions, except in the case of rape, incest, or life endangerment. Most of the money Planned Parenthood receives from the government comes in the form of Medicaid patients, for medical care provided to low-income patients. The same payments that any other doctor or clinic receives for providing cancer screenings or other medical exams.

The rest of Planned Parenthood's federal funding comes from Title X. It provides birth control to low-income and uninsured people. The same program the House Republicans voted to cut in June.

I want to say to my Republican colleagues: The year is 2015. Not 1955, and not 1895. Women have lived through a word where backward-looking ideologues tried to interfere with the basic health decisions made by a woman and her doctor, and we are not going back. Not now, not ever.

Fuckin' A, Senator. Now buy an Elizabeth Warren T-shirt, and wear it with pride.