Elizabeth Warren Will Rip Off SEC Chair's Head, Sh*t Down Her Neck 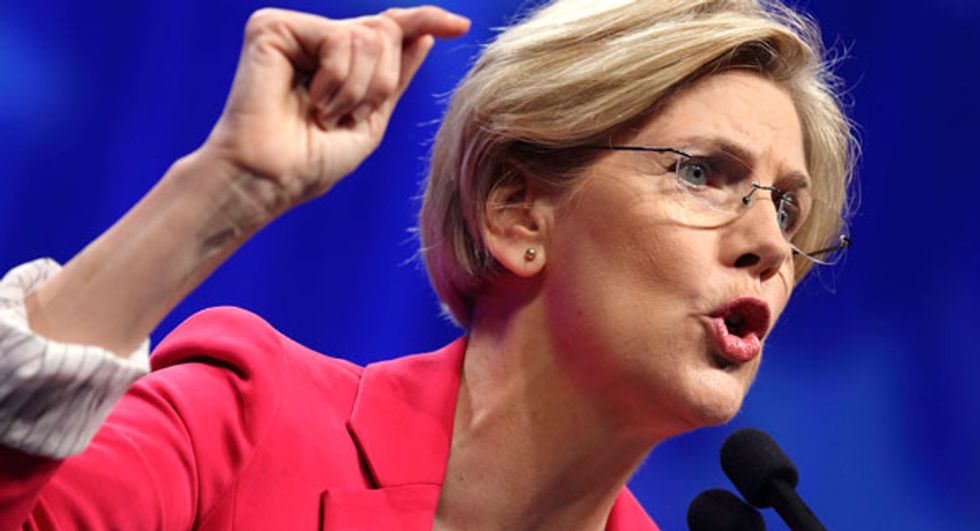 As predicted, poor John Stumpf is taking the fall for a few thousand rogue employees unable to achieve on a level field of play. On Wednesday, the Wells Fargo CEO resigned in 9-figure shame. Keep your chin up, little fella. Some may say the chief executive who pushed his people to push their people to push customers to open a bunch of unneccessary accounts effectively signed off on the widespread retail banking fraud. But Stumpf obviously couldn't sign off on anything. Look at his signing off hand!

Here's Elizabeth Warren Yelling At A Wall Street Bankster, Because You Love That Crap

She's doing what she does best, and OH, it is some quality viewing!

A few weeks ago, Massachusetts Sen. Elizabeth Warren tore into Stumpf on Capitol Hill. It was like a scene out of The Departed (a good one, not one of the 27 unnecessary ones). When Warren finished haranguing Stumpf about his mismanagement and Wells' "widespread fraud" she basically asked him how he liked them apples and told him to resign before Stumpf could even blabber out a "Thank you ma'am, may I have another?" It was all pretty wicked glorious.

What did Ms. White do to summon the wrath of our beloved legislative cleaner?

Chairwoman White is not a fan of requiring Corporate People to make certain disclosures to their shareholders. For instance, if you're a company working with Congolese warlords, using child labor to extract conflict minerals for any purpose, Mary Jo doesn't believe your customers or shareholders need to know that.

White also "scuttled a rule Congress ordered the SEC to write that would require companies to detail their political spending." A little background on this. In the Citizens United case, corporate shill Anthony Kennedy (whom we're all required to love for the flowery humanity of his Obergefell decision) delivered the majority opinion, a decision which in legal terms can be classified as "stupid as fuck." When ceding an unprecedented amount of power to Big Business, Kennedy noted, "With the advent of the Internet, prompt disclosure of expenditures can provide shareholders and citizens with the information needed to hold corporations and elected officials accountable for their positions and supporters." Hey, good suggestion! But believe it or not, when you're a judge ruling on a legal issue before your Court, your opinion matters. When you merely suggest something in a non-binding aside, you're just another jerk with an opinion and a nice robe.

In any event, White based her scuttling of campaign disclosure requirements on the same tired rationale. A little corporate personhood. A titch of the First Amendment and heck, now we've got ourselves a special class of corporate citizen sanctioned by a regulatory agency tasked with curbing abuses of corporate power. Warren isn't buying it. Congressional Democrats are upset about a Republican rider in recent government funding bills "that would prevent the SEC from issuing a rule requiring public companies to disclose political contributions." But that's the thing. This corporate protection supported by Republicans isn't actually on the books. For years there has been nothing preventing White from issuing this rule except for her sycophantic deferral to the corporate board room.

"Congressional Democrats will fight to remove the recently passed rider from December's government funding legislation, and I urge you to threaten to veto any effort to extend this corrupt policy," Senator Warren wrote. "But these efforts will be meaningless as long as Chair White continues to control the agenda of the SEC."

Damn. But White's failure to move on the shareholder disclosure issue is what really drew the ire of Senator Warren.

“She has failed to complete disclosure mandates Congress enacted in the wake of the 2008 financial meltdown, while simultaneously devoting the SEC’s limited discretionary resources to a far-reaching, anti-disclosure initiative cooked up by big business lobbyists seeking to reduce the amount of information public companies must make available to their investors,” Warren wrote.

We've previously noted the importance of certain disclosures as a kind of indirect avenue to hold Big Business accountable for doing awful shit like hiding evidence that they're overcooking the planet.

Have to say, Mr. President, she makes a decent point.