Jesus Coming Back Soon To Yell At Us For Murdering The Ringling Brothers Circus, Says Jim Bakker 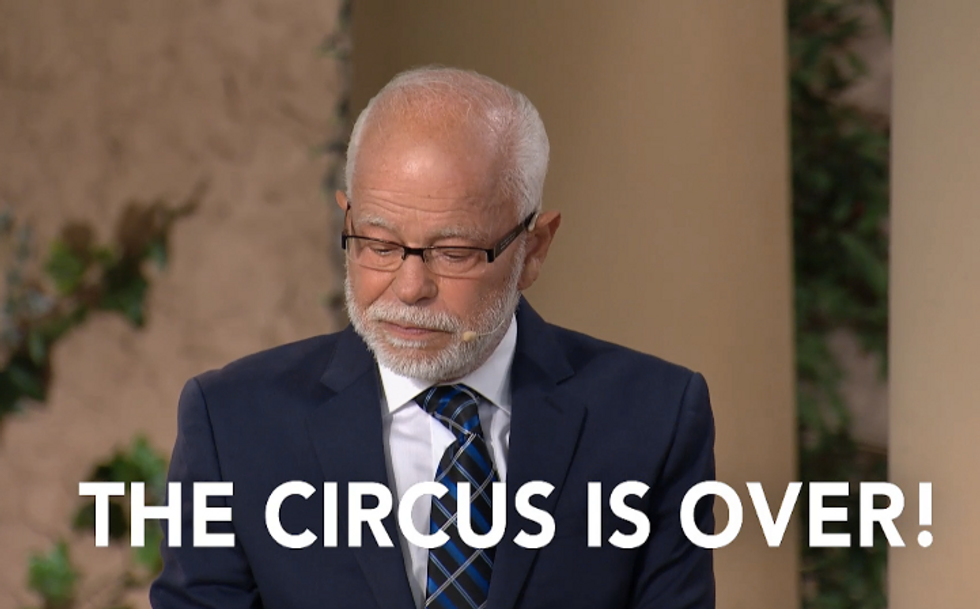 Send in the clowns -- and tell them to start preparing the fallout shelters, because Jim Bakker has it on authority from G-O-D himself that the world is ending very, very soon. And that one of the signs of this impending apocalypse is the end of the Ringling Brothers & Barnum & Bailey Circus.

It is not surprising that this is a sore spot for Bakker. After all, were PT Barnum wrong about there being a sucker born every minute, who would buy his end times food buckets?

According to Bakker, the circus closing down suspiciously coincides with a number of other things that happened -- like Donald Trump going to Israel and the Manchester, England terrorist attack, and the collapse of the Hillary Step on Mount Everest -- and when you think of all those things happening at once, what can even it be if not a very clear sign that the end is nigh?

Bakker claims that the circus is closing not because no one goes to the circus anymore, but because of a non-existent national ban on their performing elephants. He is very mad about this non-existent ban, on account of the fact that abortion is legal, and why is it not legal to torture elephants if it's legal for a woman to have an abortion, huh?

This is all particularly significant because elephants are also the symbol of THE REPUBLICAN PARTY. Which, as we all know, is God's favorite political party.

Jim decided he ought to have a chat with God about this. And what do you know? He was RIGHT.

“Here’s what God spoke to me: The circus is over. Life as we know it, unless we turn back to God, it’s not going to be fun anymore.”

We won't send you any apocalypse food buckets if you send us money, but we will keep writing stuff for you. Click below to help fund us!